This is Page One of the Musicarta 'Scale City' boot camp, and will help you master one-octave major scales.

This pattern will help you help you learn where to turn your thumb under in the Group One scales – C, G, D, A, and E majors.

The Group One scales – C, G, D, A, and E majors - divide the octave very obviously into a group of three, and a group of five notes. The thumb passes under finger three and finger three passes over the thumb (both hands) to give enough fingers to play the eight notes of the octave.

Getting the 'thumb under/three over' events in the right place is the usual stumbling block to mastering one-octave scales - and precisely what the "3 x 5 + 1 x 8" pattern is designed to tackle.

Here's a video of the whole build-up in C major - all white keys.

Follow this audio build-up to improve your practice independence.

While the right hand is doing this, the left hand will simply be walking from the little finger side to the thumb side, plain and simple.

Play the bottom five notes of the scale, up and down, hands together. The right hand practices turning the thumb under finger 3, while the left hand just runs across the fingers and back.

Then you will want to run all the way to the top. Add this on to the end of your three-times-up-and-down-the-first-five-notes. The left hand runs out of fingers at the thumb but with three notes still left to play, and so passes the third finger over to complete the octave.

Here is a line diagram of the pattern so far:

Look what it indicates:

“Up and down the bottom five notes three times, then all the way to the top.”

The second half of the pattern – descending from the top – is the mirror image of the first half. The right hand has the easy part (just walking from one side of the hand to the other) while the left hand practices passing thumb under and the third finger over.

Here’s the preparatory study for the second half of the pattern. Practice the left hand on its own first if you find you need to.

You do that three times then run all the way to the bottom, passing right hand finger 3 over the thumb to play the last three notes of the octave.

Then, follow this line diagram and complete the second half of the pattern.

As before, it shows down-and-up three times, then all the way to the bottom.

Here is the music plus audio for the full pattern.

Here is a line diagram of the whole pattern.

Here is the music and audio and MIDI performance files of the whole pattern in C major. 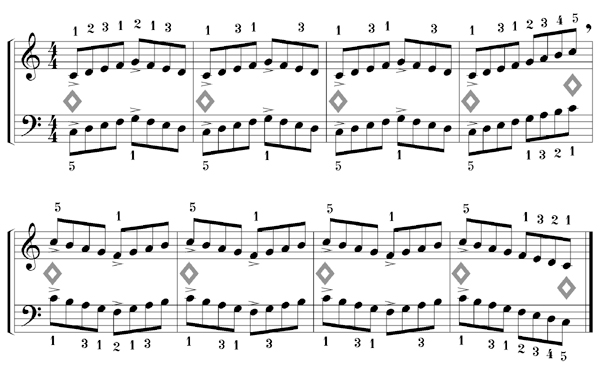 You play only the white keys in C. The lozenge shape indicates the tonic – the home- and name-note of the scale. (The tonic is nearly always the top and bottom notes of scales.)

Here's the condensed build-up in a single video.

Here's a variation preserves the same shape exactly but plays the notes in what is called ‘dotted rhythm’, or in ‘swing quavers’, ‘with a triplet feel’. It’s quite a bit harder to play like this. (The example is in C.)

A lot of popular music is 'triplet feel', and your triplet feel needs to be crisp, and deserves serious attention. Remember, you can always apply the triplet feel to any 'straight quaver' exercise.

Click through to the next module in this series for a method of tackling head on a classic problem encountered in playing two-octave scales.

The pattern in other Group One keys

This section assumes you have understood key signatures and been introduced to the keys of G, D, A and E. Have a go, by all means, but skip forward to the full-octave 2 x 5 + 1 x 8 pattern below if you get confused!

Once you are comfortable playing the “Three-times-five” pattern in C, use the pattern to practice the other Group One keys. Here are key-specific keyboards and audio performances for all the Group One scales (excluding the B major right-hand-only).

The lozenge shape on the keyboard and in the music indicates the tonic – the home/name-note of the scale. The 'Three-times-five’ pattern always starts on the tonic (both hands). 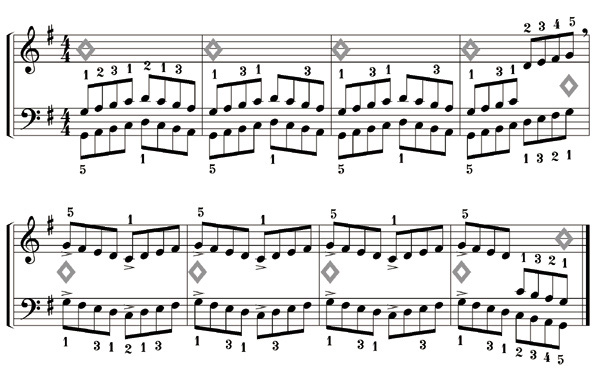 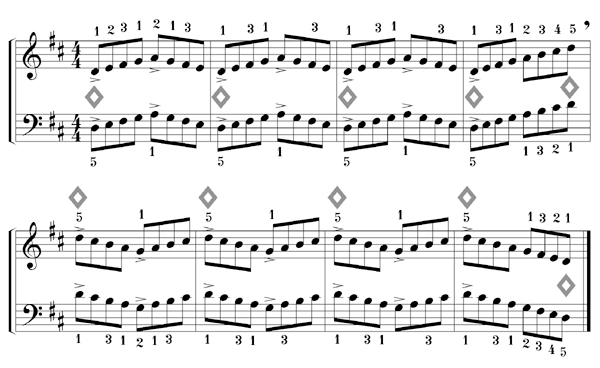 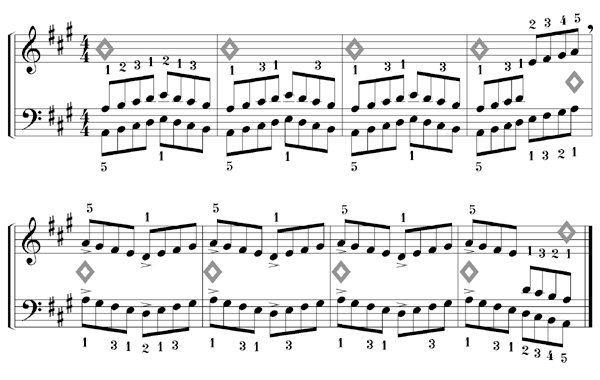 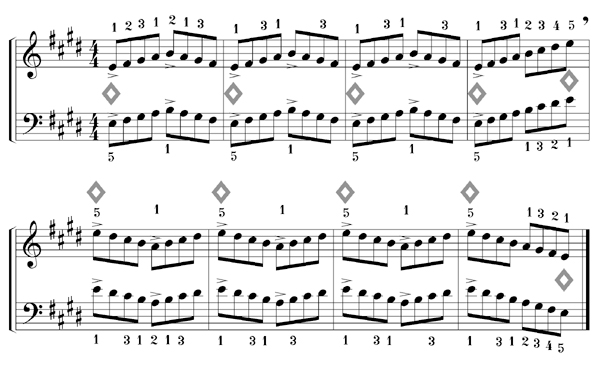 Now you will want to play the one-octave major scales up and down without stopping. Here's some help reaching that milestone. 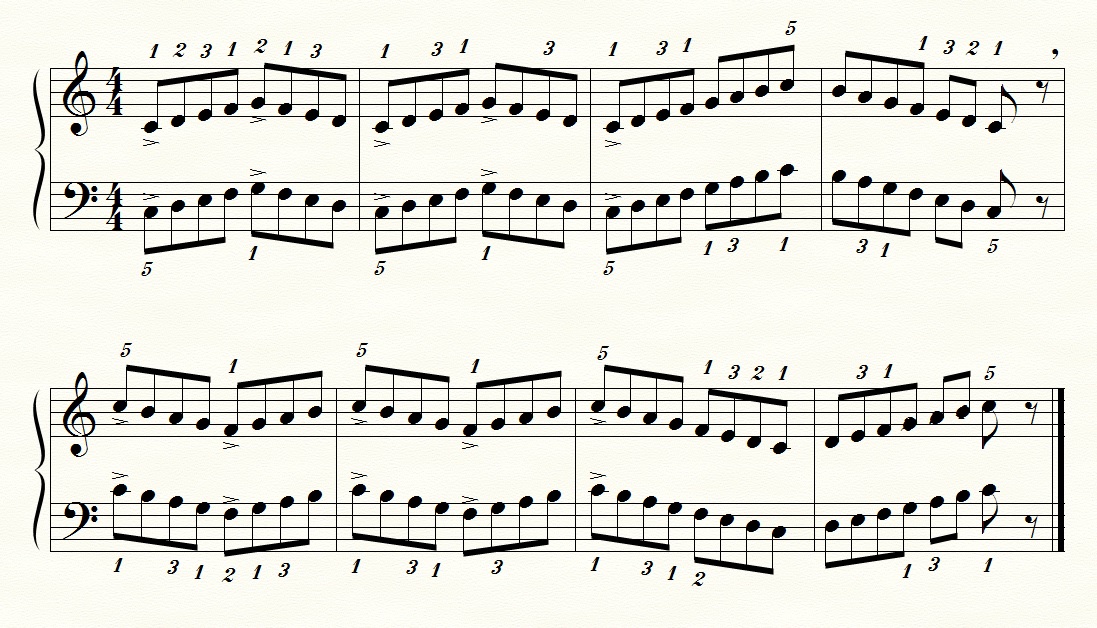