This web page will teach you the difference between major and minor chords. It uses the chords of Johann Pachelbel’s famous Canon in D, as set out in the Musicarta Canon Project.

Telling the difference between major and minor chords is easiest if we use root position triads. Play these chords, near the middle of your keyboard. 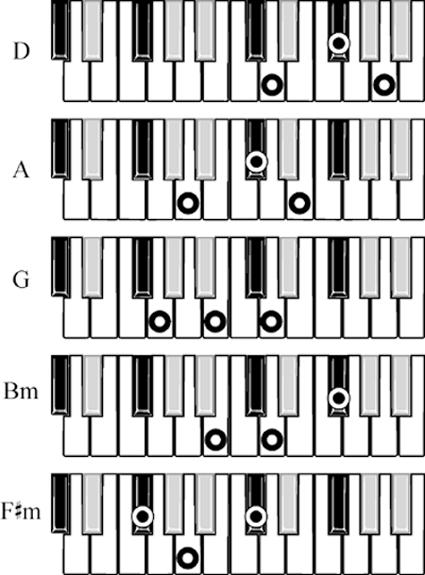 The three major chords have been grouped together, followed by the two minor chords.

Note that chord symbols take it for granted that a chord is major. ‘D’ means D major. You have to specify if it’s a minor chord by putting the lower case ‘m’ right after the capital-letter chord symbol - Bm (say "B minor"), or F#m ("F sharp minor"), for example.

Also, you don’t have to say ‘major’ (except to avoid ambiguity). “D” (the chord) means D major.

There are two differences in the chords.

Can you tell whether each of the five chords is major or minor just by how it sounds?People often say that the major chord has a ‘happy’ sound, and the minor chord, ‘sad’.

Here are the chords again with their major/minor quality specified.

This might still not be clear, because the chords are higher or lower and this confuses the issue. Here are the chords again, this time, each one changed into its opposite quality, then back.

Major and minor – telling by counting 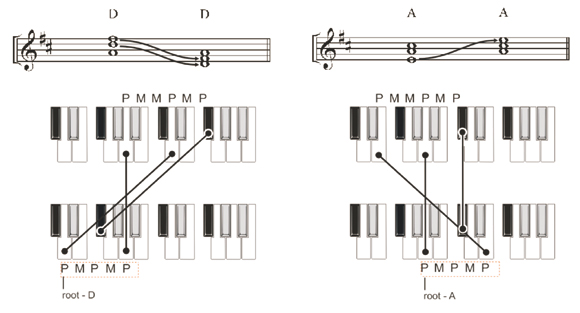 Two things to note before we start.

The first thing we notice is that all the pairs of outside notes are seven semitones apart – so that’s not what makes them different. 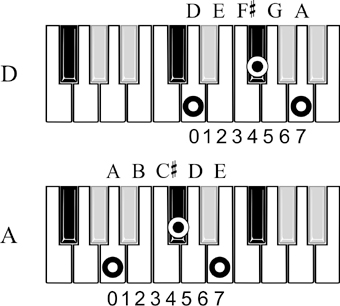 This seven-semitone distance is properly called ‘a perfect fifth’. For now, we can say just ‘a fifth’. Count the scale tone/note letter names to check – you will find there are five (see illustration).

(Remember that when we count ‘intervals’ like a fifth or a third from ‘one’ – there is no zero. When we count semitones, however, we do start from zero, as on a ruler.)

The difference is only one semitone. Count the semitones in the other major and minor chords to make sure you understand. You should get from zero to either ‘3’ or ‘4’ semitones between the next-door notes. If not, something’s wrong. 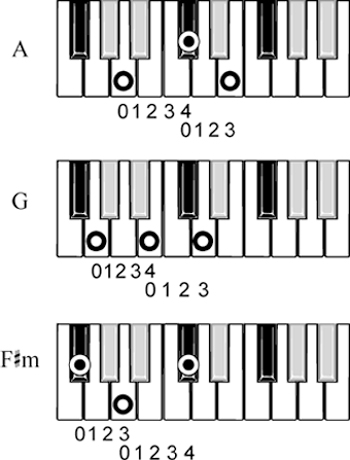 The major/minor rule is this:

Chords have to be in root position to use this semitone counting method.

In order to know whether the triad you are working with is in root position, you have to know the scale you are using. (This is why scales are so important!) You would normally use the scale of the key your piece is in (D major, in this case), but you can use the scale of the chord (root) itself.

Changing chords from major to minor

You can make minor chords out of major chords and vice versa just by shifting the third (the middle note of the PMPMP chord) a semitone up or down. 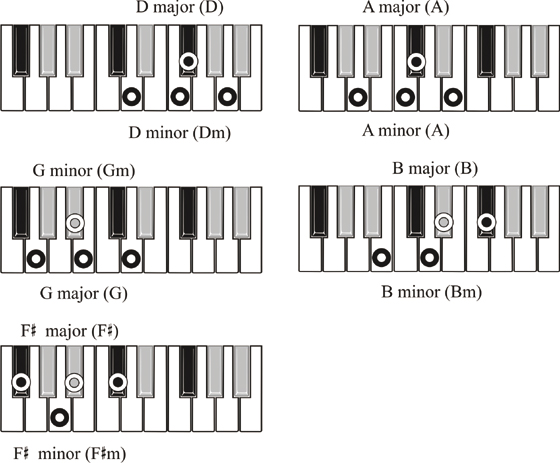 Play around with the major-minor chord difference. Learn to build major and minor chords on any root, and listen 'with purpose' to your music and ask yourself if the chords you hear are major or minor.

If you're working through the Musicarta Patreon series of Chords web pages methodically, click through to the first Triad Shapes Drills page to continue.

Hope you're enjoying studying with Musicarta! Come back soon!