You have seen in the Moving Pair series how a third can invert to a sixth and then move around in much the same way. This means you can harmonise a different note –the top note, which is the one that the ear naturally listens out for.

Cascading Sixths explores harmonising with sixths within a twelve bar chord sequence. Here is the performance video, with the audio and MIDI reference blow.

First, rehearse the dominant scales of the three I, IV, V chords you would expect to hear in a twelve-bar in C.

The sixths we are selecting for Cascading Sixths are the first four from the root down.

These twelve intervals (pairs of notes) are quite enough for a short piece. Here is the Cascading Sixths ‘skeleton music’ – before any syncopation or bass line development. 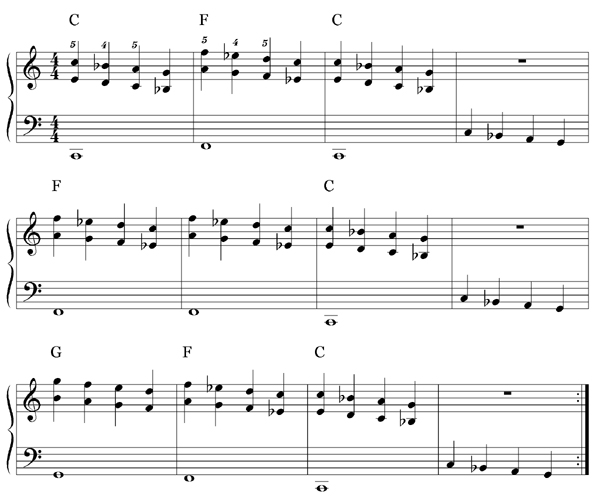 The audio and MIDI files for this skeleton music are cut off precisely at bar-end, making them ideal for looping and playing along to – the best practising arrangement.

Now work in the basic syncopation. The rhythm used is the same throughout. Absorb the counting written between the staves – learn to say it out loud. Only one line of MS is given – simply apply the same rhythm to all the ‘skeleton music’.

This ‘simple material with syncopation for show’ type of piece is perfect for practising your transposing. All the module MIDI files transposed into D for you to work with are included in your download and referenced in your workbook.