Chromatic thirds feature heavily in blues and twelve-bar music – and have passed into jazz and pop music as well. As part of your melodic and harmonic ‘vocabulary’, they’re well worth mastering, whatever genre you play in.

This module presents an uncompromising ‘full-on assault’ on the twelve-bar chromatic thirds. Proceed with caution and take it in small bites to avoid feeling overwhelmed.

The notes of the thirds

Chromatic thirds in twelve-bar music generally move both up and down:

The essential feature to grasp in order to make these thirds easily available as an element in your playing is the single whole-tone step in the entire series – between the root of the chord and the second scale degree (marked).

All the other steps in this basic series of thirds are semitones.

The scale used in the chromatic twelve-bar thirds is therefore this:

Namely, all semitones from the root up to the flattened seventh, except for the first root-to-major-second step. (This makes the thirds easier, not more difficult, to remember.)

There are many ways to finger these runs of thirds. Try out the sample fingerings on the next page.

Note that when you transpose into other keys, other black keys come into the picture, and these fingerings will no longer necessarily work.

Here is a study purely for memorising the thirds. 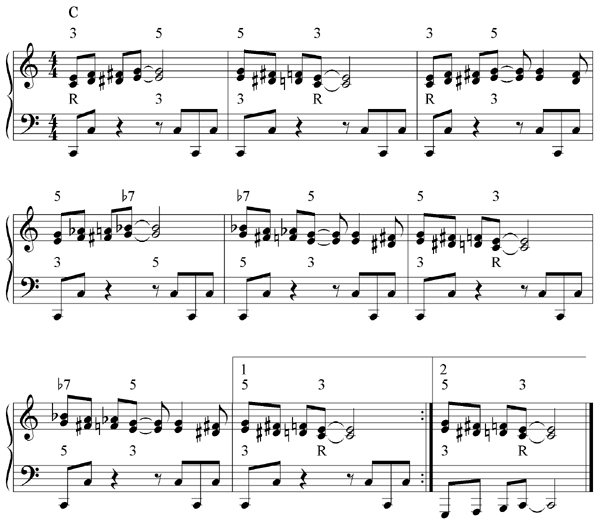 Simplify the off-the-beat bass line to simple crotchets (quarter notes) while you learn the notes and build your performance (as demonstrated in the first chorus of the performance files).

Because blues and twelve-bar music is essentially ‘music in three keys’, you need to know this pattern in all the I, IV and V (tonic, subdominant and dominant) chords of the key – C, F and G in our present key of C.

Transpose the first study (above) into F and G  – use MidiPiano to ‘check your answers’ –  or use this ready-made three-chord variation to drill the thirds. 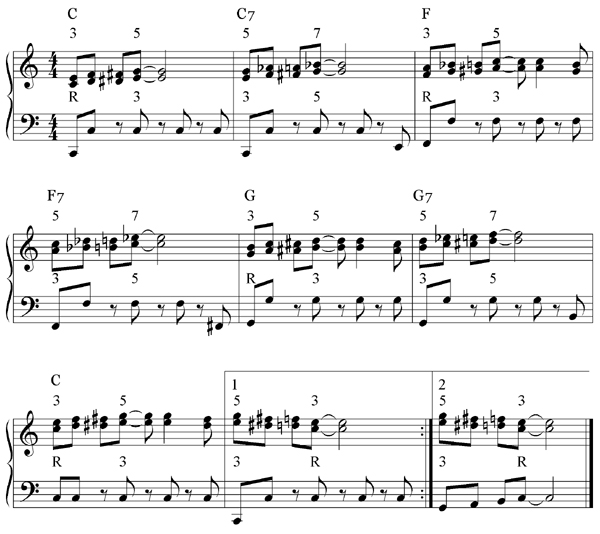 In order to play with other people, you are going to need to know the thirds in sharp keys (for guitarists) and flat keys (for horns).

Keep using the ‘landmark’ R (root), 3rd, 5th and 7th mark-up in the MS to help make sense of all the semitones. There’s no substitute for this ‘grunt work’!

In your Twelve-bar Styles workbook you will find the music for the Frantic Thirds piano solo and the Slippery Customers piano duet/solo.

Here is the Frantic Thirds video with the audio-only version and MIDI file reference below.

As always, you will feel free to simplify the bass as you learn 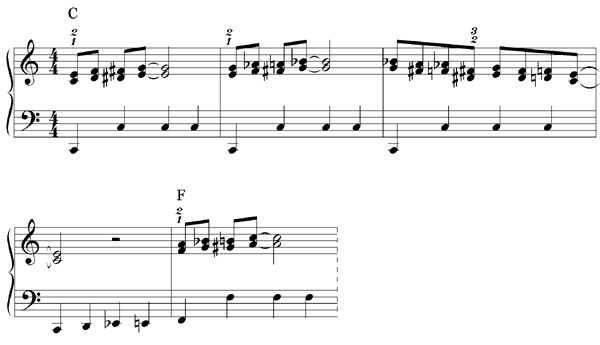