The Cowboy Roll is a twelve-bar in the key of F, so the three chords it will use are F, B¨ and C. Here is the chord chart.

Your piano solo has a two-bar introduction, and the music isn’t set out on three neat lines like this neat chord chart, but the pattern’s still there. Identify it in the music and expect to hear it as you listen to the performance audio (under this video, with the MIDI reference).

The left hand uses the typical boogie root, fifth and sixth tones, but in a very open texture. Here’s a preliminary exercise. You might not be able to get the last quaver before the chord change – it’s preferable to sacrifice a quaver and get to the new chord on time! Add the third in the right hand when you are able. 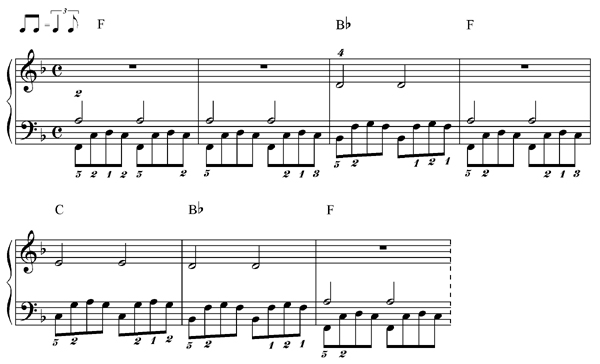 The MIDI file is cropped to repeat at a play-along practice tempo.

The swing quavers plus the syncopation make playing this simple-looking piece quite a challenge. The following are the fragments you’ll probably need to practice.

Where you see all the notes on one clef like this, the stems-up notes are right hand, the stems-down are left hand.

This written-out practicing helps you identify the pairs of left hand-plus-right hand notes and just go over them until they ‘feel right’. You can abandon the rhythm altogether to start with – slow the looped MidiPiano performance right down until you can follow.

In other places, the same three right hand notes play over a different part of the left hand accompaniment.

Here’s a practice segment for another typically difficult patch.

In performance, this practice segment is followed by the one immediately above (as shown in the MIDI.

Twelve-bar music often has some ‘crushed notes’. Most often, you crush

You have just finished studying chromatic thirds. You solve the challenge in bars 13 and 14 in two ways:

It can also be useful to notice that:

Work out what this means, and you’re half way there!

As a temporary measure, you could play just the top line of notes:

One last tip! In bar 15 – the two-handed thirds in F – expect your hands to rub against each other. Some pianists find this an odd feeling, but it isn’t ‘wrong’.