‘Rolling River’ is first and foremost a ‘texture piece’ – a keyboard texture to be played simply for the enjoyment of being carried along by it. The cross-rhythm between the twelve-eight time signature and the implied three-four meter in the melody (see section below) encourages a floating, sliding-away sensation.

Here is the performance video.

If you prefer, you can watch it on YouTube.

The example shows how a bar of twelve-eight is counted:

The audio clip – which includes a spoken count – is at practice speed. Try to build an ability to count along to your playing and tap the main counts with your (left) foot. Analysing and saying the count out loud is sometimes the only way to master rhythmically complicated music.

Finger technique for Rolling River is ‘sticky’ – the fingers should hold the keys down unless coming up to re-play a note or move to another one.

There are only two basic strains (parts of the music) in Rolling River:

(Note that ‘A’ and ‘B’ here are not chord symbols or notes but just denote different and contrasting parts of the music.)

The A7,11 chord  in Rolling River looks like a G major triad over an A bass with E as the melody note, usually. Note that the 7,11 chord suffix implies an added 9tth (here note B). The chord could equally well be indicated A7,9sus4.

The A and B strains come round again and again in slightly different forms – A1 and B1, A2 and B2, and so on. The overall structure is

There are small developments in the pattern throughout the piece, which keep it from getting stale.

The skeleton music shows only the chords to which the keyboard texture is applied – reflecting the pattern-based thinking of the creative keyboard player.

For neatness, the skeleton music is written in four-four. The upper stave again shows the right hand notes and the lower stave the left hand. The MidiPiano performance on MisterMusicarta YouTube also colour-codes the hands green for left and orange for right, so you can always work out which hand plays which notes.

The top note of the chord is the melody note. (You will make it noticeable by ‘leaning’ on it to increase its volume.) The other three notes of the chord provide the accompaniment pattern (shown in the first MS example).

The melody note plays with the first right hand note of the accompaniment pattern.

The A2 and B2 strains have a repeated melody note. 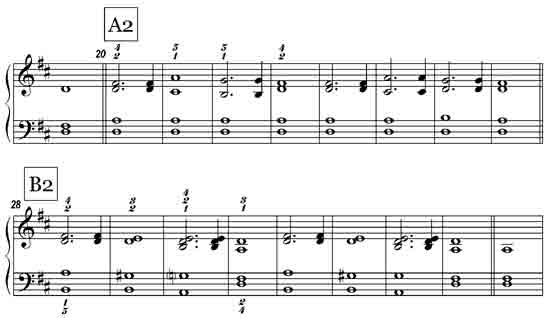 (Note the inserted extra bars of accompaniment before the A2 and after the B2 eight-bar strains – not played in the audio/MIDI clips.)

The second melody note in the bar – where there is one – comes two quavers from the end. This means the last two notes of the accompaniment pattern have to swap places and play top-bottom instead of bottom-top. 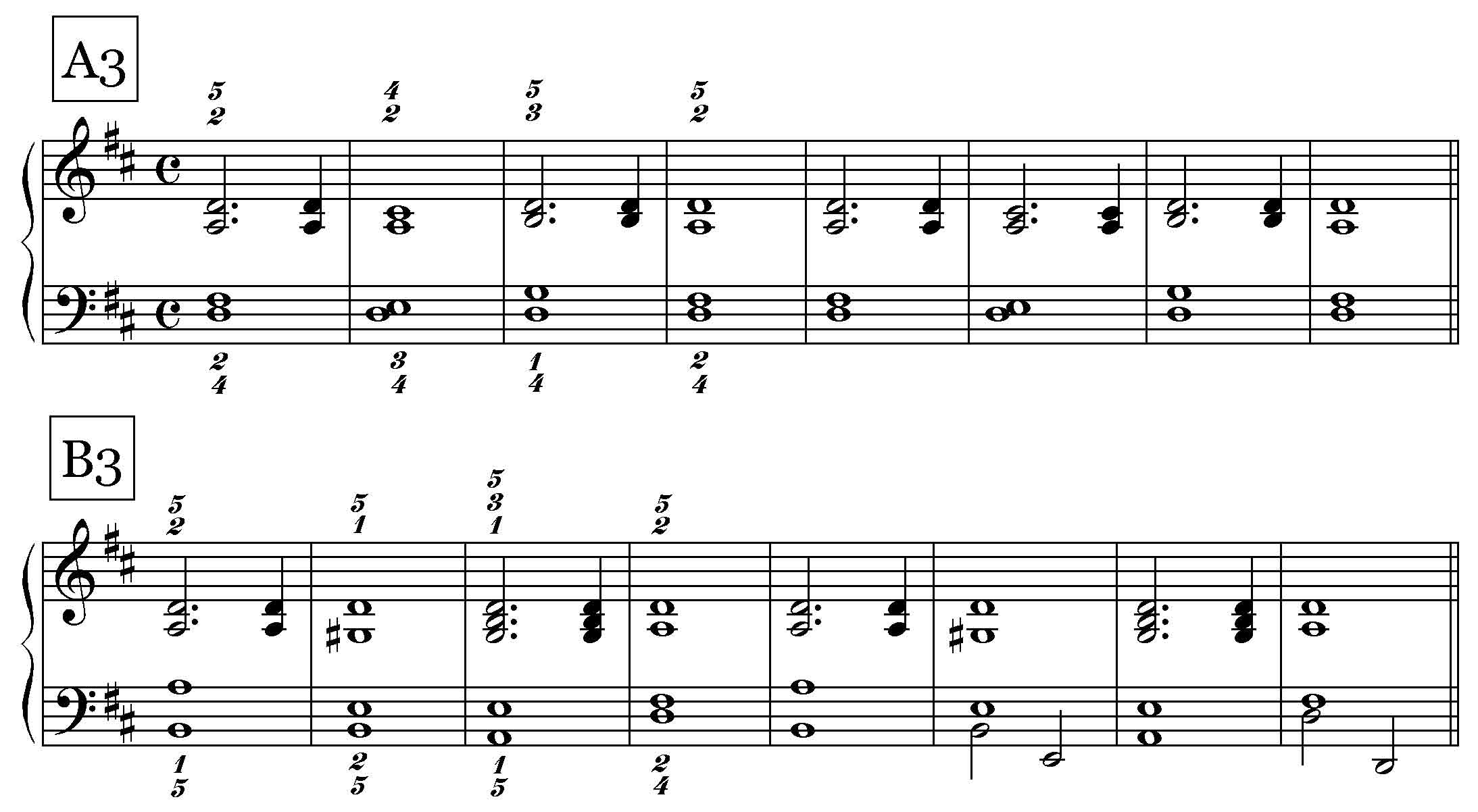 The B3 strain introduces the alternating octave bass, which requires one more of the accompaniment notes to be played by the right hand.

Refer constantly to the chord sequence as you study:

Part of the attractiveness of Rolling River is the tension between the twelve-eight time signature and beat and the fact that the right hand sounds like it could be in three-four.

Here is the Rolling River texture actually written out in three-four. 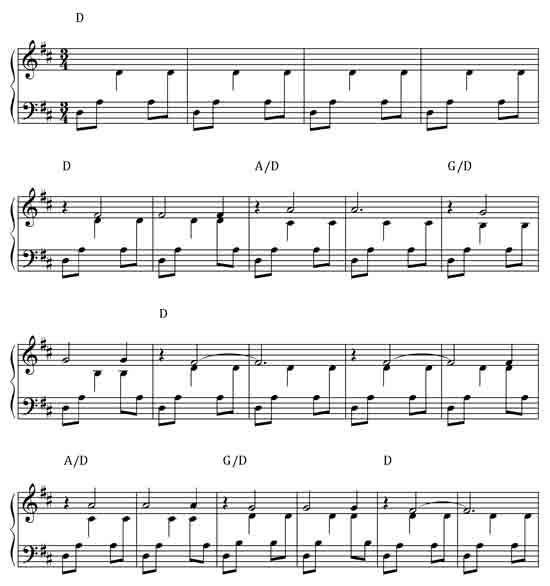 The audio performance slips back into 12-8 for a B2 strain (listen to the bass drum beat), then alternates between 12-8 and 3-4. If you can feel both at the same time or alternate between them in your head as you play, both you and your audience will have a marvellous sensation of ‘swimming in the rhythm’.

Playing the last two quavers in a group of six – the “(2)-and-a” and “(4)-and-a”  quavers – increases the feeling of three-four. Tapping the foot or feeling the beat on only counts one and three of the twelve-eight bar has the same effect.

Rolling River will shortly be included in one of the Musicarta digital home study download packs (see below). Until then, you can

for your personal study use.

Do you enjoy learning keyboards like this? Musicarta has released three digital home study packs designed to structure your efforts, maximise your progress and give a boost to your creative music-making!

All the Musicarta home study downloads are designed to help you enjoy becoming a creative modern keyboard player!

Click through to the sample content pages using the ‘LEARN MORE’ links to help you decide which home study pack would suit you best.

If you like Rolling River, chances are you'll enjoy the first book of Musicarta piano solos.

Click through here to browse the contents.
Watch the solos on the MMYT Solos playlist.

Click through to the Solos page to check out the contents in detail.