Musicarta can show you ways of learning and practicing scales efficiently, so you won’t spend hours slogging mechanically through the scales without getting what’s useful to you as a musician out of it from the word go.

If you’re a young(ish) Musicarta fan and either really hate scales or ‘just can’t see the point’, try letting Musicarta’s fresh approach persuade you to look again. Nearly every proficient musician, popular or classical, will admit, in the end, that scale work is an essential part of a rounded musical foundation.

This is a Musicarta.com web page.

Musicarta is a collection of creative online piano lessons for pianists and keyboard players of all ages and stages.

The principal aim of Musicarta is to teach 'music theory that works' and introduce you to the wonderful pastime of 'messing about at the keyboard'.

If you're new to Musicarta, visit the Musicarta home page for an introduction to the Musicarta way of doing things and an overview of what's available. Then use the the universal navbar on the left of your screen to access the home pages of the various sections and projects.

Musicarta recommends all keyboard beginners, improvers and adult continuers who are serious about making progress start with The Pyramid Variations, our flagship series of lessons, which builds up from an elementary 'Basic Music-making Position' to an impressive Concert Performance in just eight graded steps.

Click straight through to The Pyramids Variations home page if you want to jump-start your journey! Your scales work should include elements of all the following skills areas.

The musical octave is made up of twelve semitone steps, but the major scale (and its associated key) comprises just seven different notes – not all the available notes are used. Key signatures – the collections of sharps or flats at the start of a line of piano music tell the pianist which keys to use and which to avoid in order to play in a given key.

The well-schooled musician sees the key signature in the keyboard and is pre-programmed to play the ‘right’ notes.

Link through to the new Key-specific keyboards page here. Read more about the page in the Dec 04, 2012 Musicarta blog entry.

Teachers and self-directing pupils will both benefit from this focused solution. Try the Musicarta solution and see how quickly it improves your scale performance and knowledge of keys.

Scales are often practiced and played without any rhythm at all, but a rhythm provides great motivation for the player to ‘keep the notes coming'. Practice patterns with specific up-and-down contours have the same effect.

Musicarta offers a collection of Contoured scale practice patterns in D, specifically for keyboard players working through the Musicarta Canon Project - though any learner wanting to get to grips with a good intermediate key signature will find the practice invaluable.

The Rhythmic scale practice patterns page is for the intermediate-on learner who has realised that immersion in conscious, musical scale practise will repay the effort a thousand-fold.

Both these modules coax the learner away from written-out scales by presenting contoured patterns as simple line diagrams to be 'realized' (in any key) by a more conscious and creative, self-directing musician.

Click through and see how Musicarta’s collection of new and challenging scale practice techniques will liven up your practice and double the benefit of time spent on scales.

Minor scales (and keys) present distinct challenges. In Western classical music, there are two minor scales, melodic and harmonic, the first used principally in the melody and the second to generate the chords of a minor key. A great deal of minor-feel popular music, however, is modal (you can access Musicarta’s extensive coverage of modal music via the MODES tab on the navbar, left), or is blues-oriented and built on the minor pentatonic scale (see PENTATONICS, left).

We hope you have found your visit to Musicarta's Scales home page interesting.

Scales are underestimated (particularly by pupils!) as a creative building block. If you do no other practice in any one day other than playing scales for a few minutes - consciously, with attention, and in a creative way, you will have kept the spirit alive and banked some 'musical merit' which is sure to mature at a later date.

Read all about it on the Musicarta Newsletter page.

The Musicarta News - regular encouragement to learn and progress!

Or – get the Musicarta RSS feed. [What’s that?]

© Copyright R A Chappell/Musicarta.com. For private study use only.

THE MUSICARTA
BEAT AND RHYTHM
WORKBOOK

MUSICARTA
now on sale at
AMAZON BOOKS
and
AMAZON UK

MUSIC SOLOS
FOR SALEClick through
to browse 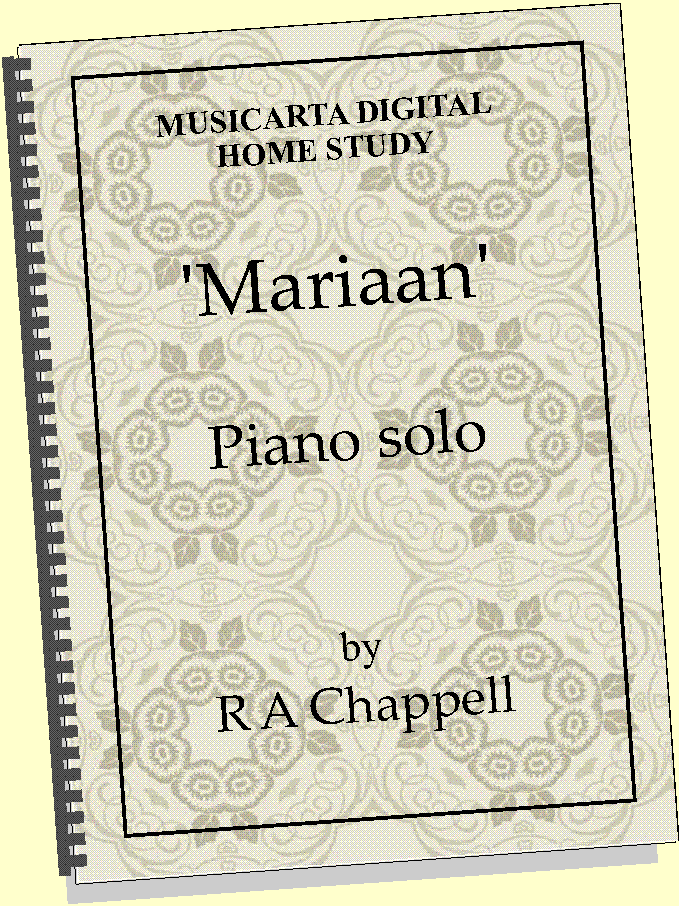