This Musicarta Patreon Premium web page is the second in a series of pages which will help you find the keyboard chords you need. It coaches you in finding inversions using just the right hand - an essential skill, but always difficult to start with.

You will get more out of this web page if you have worked through Finding Inversions Page 1, but you will achieve the very best results if you revise the first module now and carry straight on to this page.

You will also need to have saved your Musicarta Keyboard Chord Generator pdf to your desktop and printed it out. This 'visual glossary' shows the chords used in this module chords using the circle, triangle, square symbols as here.

Your first Module performance goal is this right-hand-only series of four inversions, rising and falling.

Moving between inversions with just one hand

Revise the two-handed method of passing the top or bottom note of a triad up or down an octave to 'invert' it. 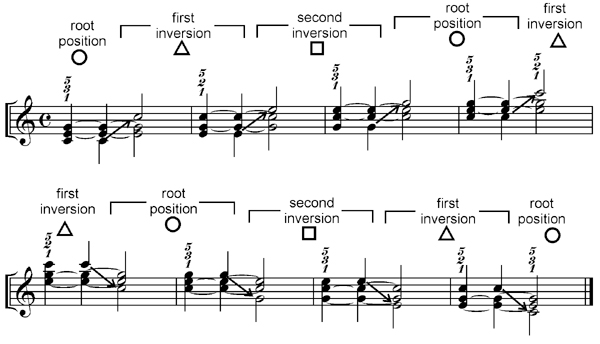 There is a ‘method’ to help you achieve the performance with ease, just below.

Here are the chords on a keyboard:

This is the easiest way of learning the just-the-right-hand drill:

1. Play the starting chord and hold the notes down

Stare at it! Rehearse the octave jump in you mind’s eye. The bottom note is going to jump an octave over the other two notes to the next ‘looks-the-same’ note, which should be flashing at you like a beacon.

This version of the performance files try to suggest this:

2. See all three notes of the new inversion – one different, two the same. Be 100% sure you know those next-three-notes perfectly before you jump!

﻿ 3. Move your hand to the new inversion and play it.

You repeat the process until you get up to the next root position, then turn around and come back down again. This is your Module goal performance.

If you find yourself guessing, or just getting it wrong, be strict with yourself and go back to the two-hand method temporarily. You can see a combination of the two methods in the MIDI performance file of this music:

Use this ‘one of the old method, one of the new’ technique on any pair of inversions which gives you trouble.

Try this method of making sure you don’t lose track of the notes when you swap inversions. This method is particularly useful if it’s the two-notes-that-stay –the-same that you tend to lose sight of.

The hand feels very unusual making this crab-like sideways progress, but narrowing and widening the hand is an essential ingredient of technique.

Playing inversions of other chords one-handed

You should go on to practice the basic module inversion pattern from any white-key root position (PMPMP) triad. (Avoid the triad built on B.)

You do not need music – in fact, it is a distinct drawback. The exercise rehearses ‘seeing the chords n the keys’, and written music generally interferes with this.

Here are the performance files of the pattern played from root position, thumb on C, D, E, F, G and A starting around middle C. This gives you C, F and G major chords (C, F, G), and D, E and A minor chords (Dm, Em, Am).

These are all white-key chords – you do not have to use black keys to make the minor chords minor or the major chords, major.

Follow the performance files first, then speed up – add a bass note (the root of the chord), and ‘jazz it up’ any way you can think of.

The other drills in this module are presented as chord sequences. For each letter in the chord sequence, you will play four chords. There are two bars of each chord, so you have time to play your four inversions going up and coming down.

The little arrow when the chord changes shows whether you go ‘up’ the keyboard (to the right), or ‘down’ (to the left) to find the new chord.

These are all white-key chords – you do not have to do anything to make the chords major or minor.

You can hear from the audio performance files how these simple inversion patterns are ‘nearly music’ already.

Using only two Group Two chords (one black key, B minor and A major - see the Keyboard Chord Generator pdf you have saved), you can play this chord sequence in D.

Use the circle, square, triangle symbols in the Chord Generator pdf download to find the chord shapes you need.

Drill Three uses the same rising-and-falling module inversion pattern. When the chord changes, move to the nearest ‘next chord’.

Using only two Group Two chords (one black key – B minor and D major), you can play this chord sequence in G

Next, we change chords twice as quickly, playing one chord rising in one bar and the next chord falling in the next:

You can hear from these drills that a simple succession of rising and falling inversions is ‘nearly music’ The syncopated bass line helps. The essential bass note is always the root (the name-note of the chord - for a C chord, play a C bass).

Learn to copy the syncopated left hand/right hand pattern by tapping along to the performance files on your desktop first before trying to play the notes and the rhythm at the same time at the keyboard. (Always simplify your tasks into ‘components’ like this – hands separately first, what-comes-with-what, just the rhythm, etc.)

Now go on the Page Three of the series.