This page assumes you have worked through the Finding Inversions series from Page One. If you are coming back after a break, a few minutes revising the series will be beneficial.

This module's exercise will really make your brain work - but thirty minutes spent on it will be worth weeks of purely mechanical practice.

Work at this exercise at least until you understand it in principle - then take a break, and use it as necessary to really get a handle on confusing chords.

Here are our three starting propositions.

Try the original audio version of this page for the retro feel, or jump down for the video version.

Here are the chord tones of C major shown on a keyboard and marked R (root), 3 (third) and 5 (fifth). Match the performance in the audio file using both hands and any fingers to find the notes.

Name the root, third or fifth as you play them.

The root (R) as the fixed tone

You are going to play the root (R) as the bottom, middle and top note of a triad in turn, reversing through the series until you're back in root position.

Observe that there are two styles of number/letter on these keyboard diagrams.

One sort (numbers 3 and 5) is aligned with the letter 'R' (the root of the chord) and denote the the third and the fifth chord tones.

Have a look at the illustration, then copy the audio file. 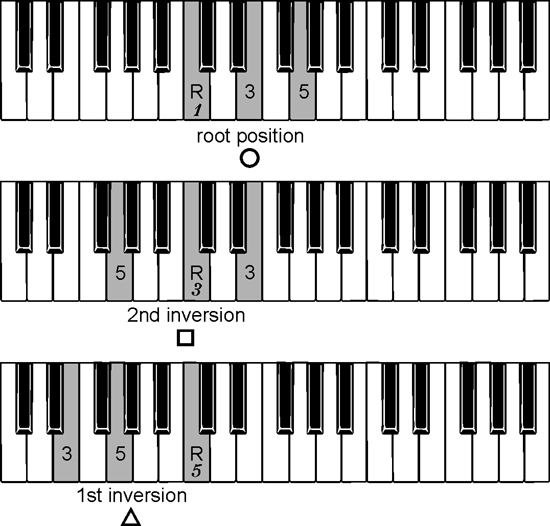 You will end up back in root position.

The third (3) as the fixed tone

Use your preferred method to go up one inversion into the first inversion.

You will be playing the first inversion chord with fingers 1, 2 and 5. 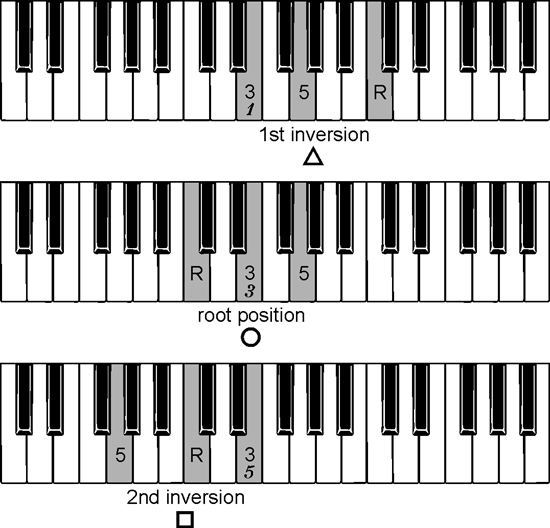 The fifth (5) as the fixed tone

Climb up one more time, into second inversion. 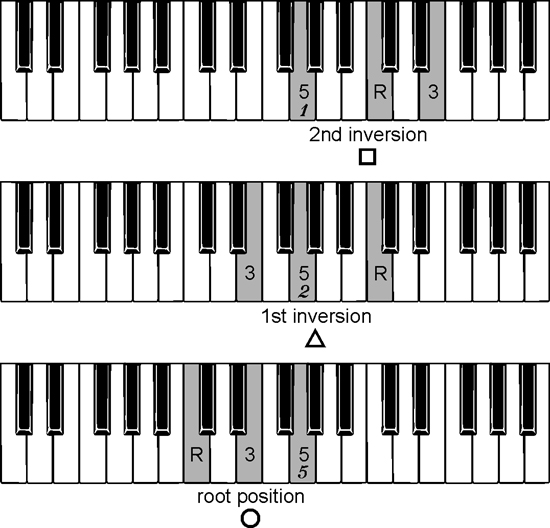 Build up speed and fluency

Go back to the first group of three chords, focusing on the root. Copy the next audio file – it cycles through the three positions, both up and down, in rhythm.

Practice until you can keep up with the audio performance file below the diagram.

Do the same with the second group of chords, focusing on the third.

Do the same with the third group of chords, focusing on the fifth.

To finish musically, repeat the first group of chords at the octave.

That completes the exercise.

Here's a video demonstration of this procedure. Use it to cement your understanding. Keep practicing until you can play the procedure in C fluently.

Work through any confusion until you can play at this speed.

Whenever you are learning a new chord from the Musicarta Keyboard Chord Generator, use this exercise and you will soon know your chord very well.

A pdf file of the written-out music for the complete exercise is available here, but playing without the music and concentrating on 'seeing the chords in the keyboard' will do you much more good in the long run!

Now go on to play the exercise in D and B flat majors.