A Visual Glossary of Major and Minor
Triads and their Inversions

The Musicarta Keyboard Chord Generator groups the 24 major and minor triads according to how they look, in terms of the black and white keys used. Open the

for reference as you read the following introduction.

Why a visual approach?

This new approach has been adopted because good popular-music keyboard players ‘see’ the chords they need in the keyboard, without even having to think about it. The chords are literally ‘at their fingertips’. You can fast-track this ability by studying this visual glossary and the other Musicarta chords and inversions material.

This visual approach indicates five main groups of chords, with sub-groups (‘types’) making up 12 groups in all.

If you enjoy a visual approach to keyboard creativity, you’ll like the new

KEY-SPECIFIC KEYBOARDS
Musicarta web page!
The well-schooled musician ‘sees’ the key signature in the keyboard and is pre-programme to play the ‘right’ notes. This new page presents useful, intuitive keyboard diagrams representing what the proficient musician sees in response to the twelve key signatures, arranged in logical order and with theory notes.

Click through and stop letting key signatures hold you back!

In the Chord Generator keyboards:

(This discussion is non-essential. Feel free to skim or just study the illustrations.) 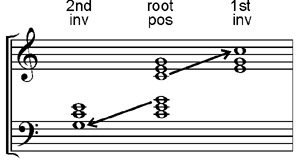 Note that the convention of starting from the root position isn’t based on musical values. Because our ear is naturally drawn to the top note of a chord, the first and second inversion chords are musically more pleasing. Secondly, ‘flipping’ the chords downwards should be just as easy as flipping them upwards. In the end, all parts of the upwards/downwards cycle should be equally ‘well-lit’, so that flipping either way from any inversion is equally easy.

Just go ahead and do it! Explore the chords, and use the Keyboard Chord Generator to find the chords you need for your sheet music or tab-based playing.

Get creative! Play right hand inversions, with a single bass note in the left hand (the root, or name-note, usually). Imitate the rhythm of your favourite songs and see what comes out.

Notice similarities and differences between the groups of chords:

Knowledge like this is tedious to write down and explain, but this is what the musician ‘with the chords at his fingertips’ instinctively draws upon. It is usually acquired indirectly over many years, but the visual Musicarta Chord Generator and similar material across this website will help you speed up the process.

You should aim to be able to sit down with the printed bulleted text list and visualise all the chords described, group by group,in root position, flipping upwards into first inversion and downwards into second inversion.

This ability is only acquired by degrees. Take it by stages and tick off your progress on the list – the ability to self-motivate is key. Access more visual chord recognition material via the Chord Finder home page.

Diagrams on the Broken Chords covering page show how the system works.

Keep a copy of the Musicarta Keyboard Chord Generator by your keyboard and refer to it often. Suggestion: Have it laminated, to give it more 'presence'!

Playing a melody with a full, satisfying chord accompaniment is THE benchmark achievement for the modern-styles keyboard player. ‘Mariaan’ breaks the task into bite-sized pieces and builds your performance step by step – you’re guaranteed to learn something useful and tuneful every time you sit down to play!

The digital download contains a 70-page PDF packed with examples, a coaching video, the audio and MIDI files of all the practice sections and the (Windows OS) MidiPiano virtual keyboard, which turns every MIDI file into a mini ‘how-to’ video. Hours of top-class teaching material for less than the cost of a single lesson!