The Pyramids Diaries are Pyramids variations that have been discovered at the keyboard since the latest workbook revision.

New Pyramids Diaries entries will hopefully inspire you to keep coming backup to the Pyramids material and enjoy a lifetime of 'messing round at the keyboard' with this versatile and easily mastered chord sequence.

The less-developed sketches below have been left for experienced Pyramid builders to hopefully see how the Pyramids chord sequence has been 'realised' - brought to life - and will sit down and, with a bit of experimentation, play the new versions - or their own version of it.

The great thing about knowing a chord sequence inside out is that you can 'just sit down and play'. Pyramids has a regularly structured chord sequence, which means that if you decide on a pattern for the first pair of chords (Am and F), you can apply that keyboard texture to the second and third pairs and in effect 'fill up' three quarters of the 16-bar, A1A2 version at a stroke.

If you have worked through the 'Broken Chords 1', try to play the variation from memory - or make up a variation on it.

3. Note the extended ending. It's common practice to extend a piece by repeating (as here) the third- and second-last chords twice (making three times in all) before finally cadencing to the last chord.

This version goes on to duplicate the effect with a following three-times-alternating i-iv (Am-Dm) pair as well.

Musicians familiar with the Pyramids variations will hopefully recognize the outlines of the Pyramids chord sequence in this piece, though liberties have crept in.

As a Musicarta Patreon Tier One subscriber, you are automatically entitled to a discount on all Musicarta publications. Use the code you will have received to but the Musicarta Piano Solos Vol.1 on the Musicarta discount sales page.

To study a variation like this, with the intention of learning to play it (as a challenge), you would 'just' watch it through several/many times, concentrating on one thing at a time.

A technical harmony point: In the more recent Pyramids Diaries, the D sharp diminished chord keeps making an appearance at the end of the phrases before the E major chords, either squeezed in or instead of the regular F major/D minor chords. The D sharp diminished chord can be read as a B7-flat 9 chord, but without the root B -- and thus a secondary dominant of tonic chord A minor.  (I said technical...!)

The first is the same as Further Variations No.4, except for the F major 7th and E minor 7th chords, which are improved.

A version with a melodic variation in the left hand, in three-four instead of six-eight. There is a deliberate cross-rhythm here, with the suggestion of six-eight (two times three quavers) never far away.

The right hand use the familiar root pos./1st inv. pairs of chords 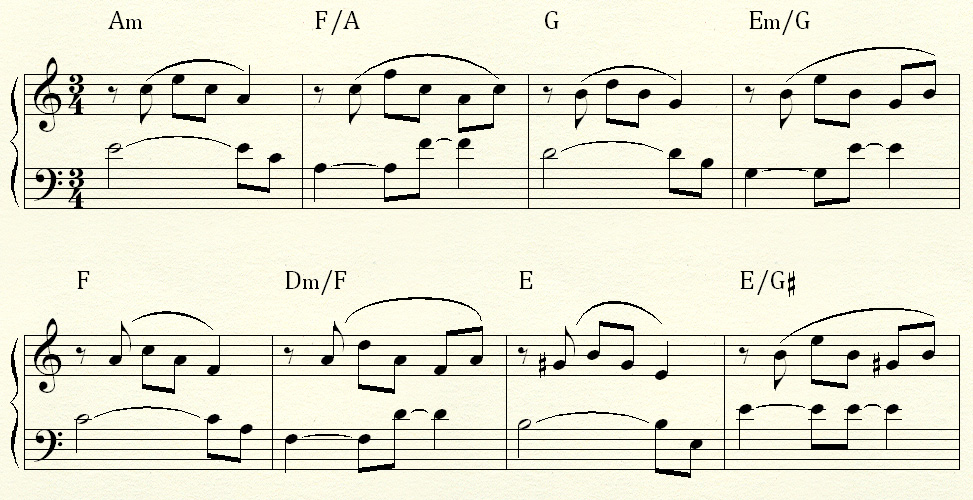 Try devising a B section in this texture.

The Pavanne (the Suspensions Variation in the Workbook) acquired two impromptu studies in a lesson recently.