TPV Diaries 14-11-12 is a broken chord study on the Pyramids Variations A1A2 chord sequence, with a couple of circle-of-fifths chords in the A2 stretch.

In classical piano, ‘broken chords’ usually means the hand climbing up or down the inversions of the triad, as the right hand does here. (See MS above, and watch the MidiPiano performance in the video.)

You can see the triads clearly in the skeleton music on the next page.

Classical pianists play lots of these patterns to familiarize the hand with the keyboard and train their 'ear'.

The trick is to ‘crawl’ the hand up (to the right) or down (to the left) so there are always fingers to play the notes to come. This means starting every new group of three notes (inversion) with the thumb going up and RH5 coming down.

Always "look for the patterns"! It’s easier and more creative to identify and play the pattern than the succession of notes it generates.

Here are the right hand inversions as block chords.


Practice hands separately and together from the skeleton music as per the audio performances. Work towards keeping up!

The skeleton music here can’t be played as written – the hands overlap. It’s to show the ‘elements’ the study is made up of. 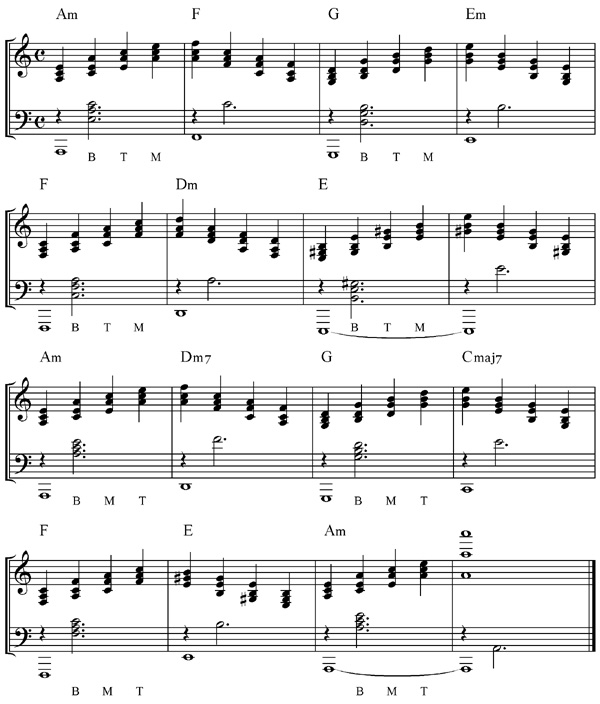 Watch the analysis video to see how the elements of the skeleton music become the study.

You can easily devise other patterns to adhere to. Every new one you play makes you more and more the master of the music, rather than just the performer.

The TPVD 15-03-13 right hand is the same as 14-11-12. The underlying LH bass-plus-chords are shown in the skeleton music below. There are a lot of slash chords. 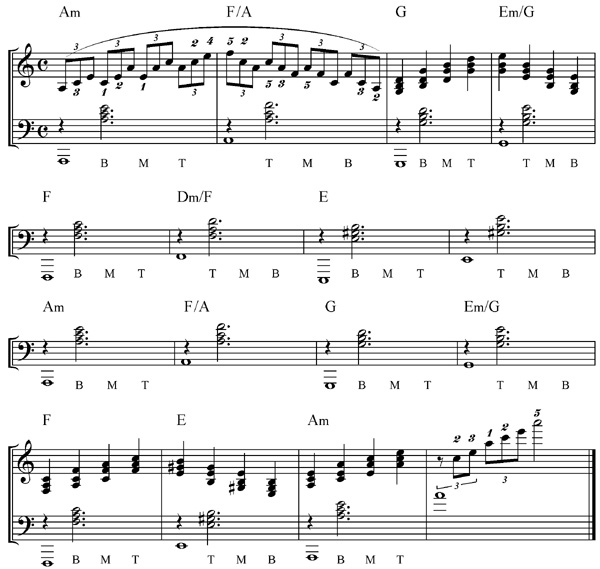 You cannot play the skeleton music as written because the hands compete for the same notes. Use it, along with the audio/MIDI performances and files to guide your build-up.

Practice the slash-chord bass/left hand chord string as fast as you accurately can.

This is how to practice methodically - and methodical practice will always get you there.

Go straight on to Broken Chord Variations page 2 for more ways of making music out of these elements.