This Musicarta Patreon Premium web page gives you a comprehensive introduction to the five basic types of seventh chord.

For your music to be interesting, you must know and use seventh chords. Seventh chords make music ‘move’. Seventh chords are four note chords, and the extra note makes the chord ‘top heavy’, so that it wants to move to another chord.

All sophisticated popular music, and jazz in particular, depends on seventh chords for its interesting sound. Modern keyboard players are expected to be able to build any seventh chord on any root from just a chord symbol. The Musicarta Seventh Chords keyboard drill in this module will show you how to practice that skill efficiently.

Seventh chords are also essential for the Circle of Fifths, the ultimate chord progression and the heart of jazz harmony.

Seventh chords are four-note chords – the triads you already know (major, minor or diminished) with another note, a major or minor third above, on top.

or ‘every other note’ chords.

You can tell these are

Play seventh chords on every note of the C major scale, going up - built up from every white key from middle C up to the next C.

Use two hands to make playing the chords easy. Use fingers 2 and 3 or 2 and 4 of both the left and right hands. The scale degrees (notes of the scale) are numbered.

The types of seventh chord

But although the chords look the same – either stacked line or space notes – there are in fact four different types in the selection above. You can only tell this by counting carefully the semi-tone steps between next-door notes at the keyboard.

Here are some examples. The four keyboards match the four chords in the written music. Carefully counting shows that there are four different types of chord. 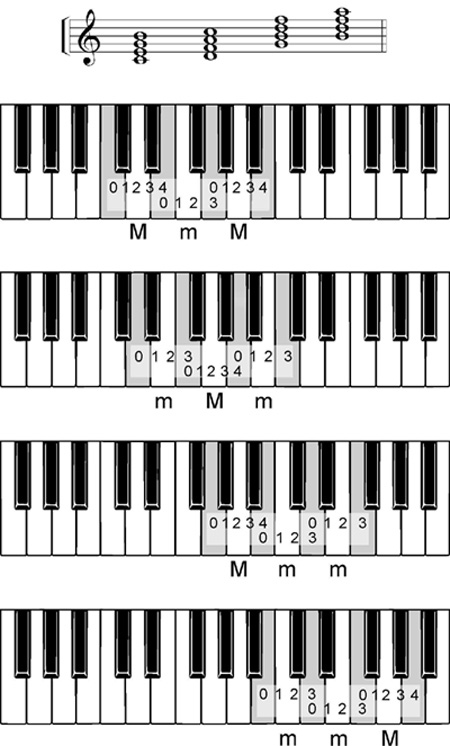 The four different types of chord (shown above) are:

The next diagram shows in written music all the seventh chords you can make from the notes of the major scale with the distances between next-door notes – the ‘intervals’, M or m – written as stacks underneath.

You will find that they are all the four different types of seventh chord already counted at the keyboard. To this group, we are going to add one more from the minor key – the diminished chord, consisting entirely of minor thirds (m, m, m).

Here is a table showing all five types of seventh chords with their quality and proper names. 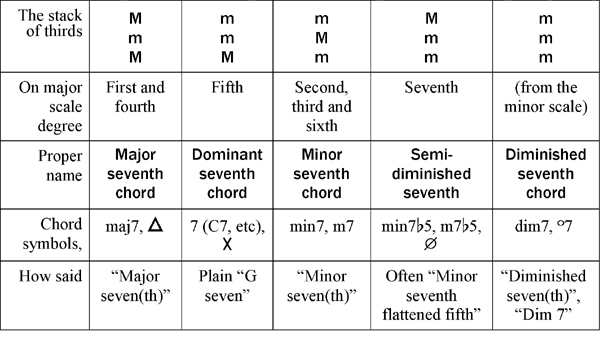 Popular-music-styles keyboard players have to be able to build any variety of seventh chord on any root - often from just a chord symbol. The Musicarta Seventh Chords keyboard drill offers an efficient way of working towards this goal.

To study this module effectively from here on, you need to open and print hard copies of the following files. Click on the links to open the pdf's and print them out. 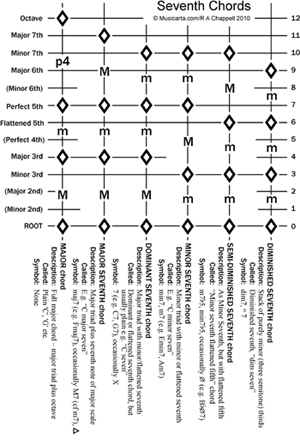 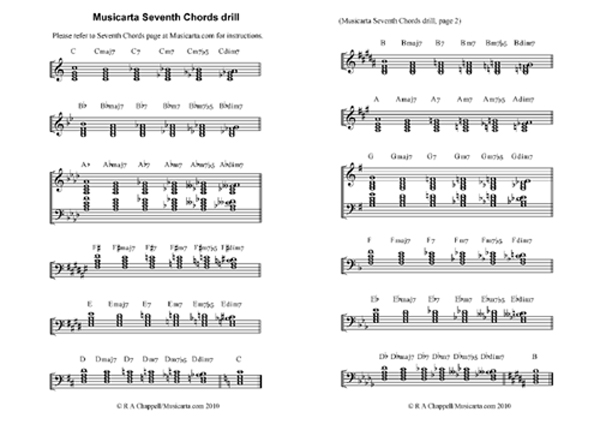 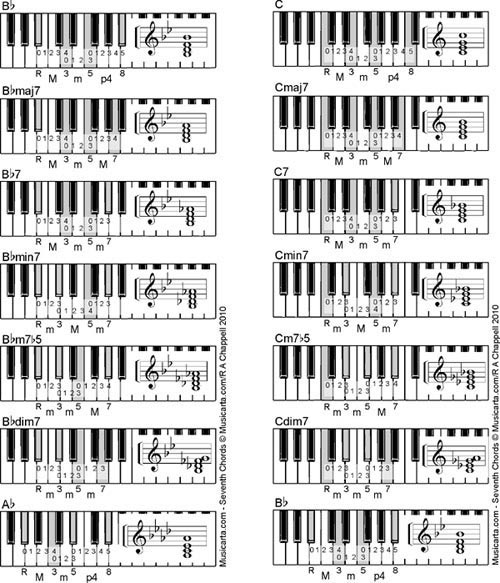 This drill starts from a four-note plain major chord (with the root repeated at the top). Then the chord tones are lowered one by one a semi-tone at a time until the chord has contracted to a diminished seventh chord the smallest seventh chord.

Where – because of the leger lines – it makes more sense to start writing the music in the bass clef (the third chord of each series) the same music is written out in both clefs.

Play the first line of the drill – the C major chord and the five seventh chords built on C. (End with the B flat chord from the next group for a musical finish.)

Use the music manuscript (written out music), the keyboard ‘evolution’ diagram for C to B flat and the audio file to help you.

Here’s what you do:

2. You lower the top note a semitone to make a C major seventh chord.

3. You lower the top note again to make a ‘plain’ C seventh chord.

4. You lower the third of the chord to make a C minor seventh chord.

5. You lower the fifth of the chord to make a C minor seventh flattened fifth chord.

6. You lower the top note again to make a C diminished seventh chord.

7. You play a full four-note major chord on Bb, a whole tone below the C chord you started with.

Now repeat the process from the Bb chord. Again, use the music, the keyboard ‘evolution’ diagram and the audio file to guide you.

2. Lower the octave a semitone to make a Bb major seventh chord.

4. Lower the third of the chord to make a Bb minor seven chord.

5. Lower the fifth of the chord to make a Bb minor seven flattened fifth chord.

To associate the sound with the chord name, say out loud the type of seventh chord as you play through the series.

Please note though that this drill is not a piece of music. You would not expect to hear this chord progression. It is a drill to learn the seventh chords by showing how they can be created by progressively lowering the tones of a full (four-note) major chord.

In root position, seventh chords are stacks of three thirds. Thirds are either:

To do this, you have to pay close attention to the semitone counting within the seventh chords and learn the combination of major and minor thirds which make up the five varieties of seventh chord.

The semitone count is shown on the two keyboard pages you used in the module section above – running through the types of seventh chord on roots C and Bb. We can see this vital semitone count more clearly by taking the keyboards away and matching the numbers with our Seventh Chords master line-and-diamond diagram turned on its side. 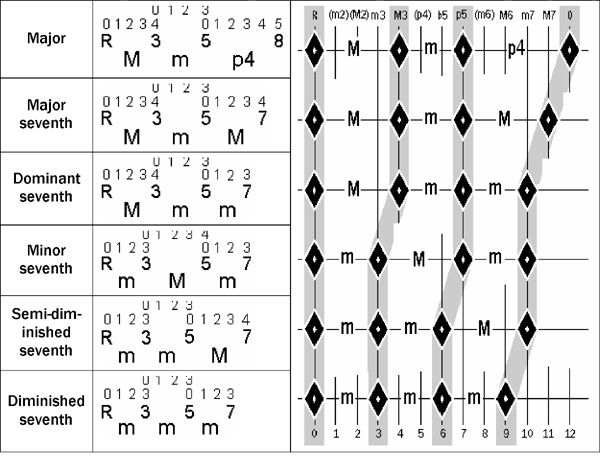 Note that this table shows only one line of chords from the keyboard drill.

The sequence of five seventh chords on the same root plus the line-and-diamond diagram on the right above shows the chord ‘shrinking’ from the original full major as it goes through the various combinations of major and minor third.

You should be able to play a group of five seventh chords on any root from this diagram. Try it, and, if you don’t at first succeed, try to figure out why.

For a smooth run through the chords you need to know which voice (chord tone) is going to change next.

Here is the line-and-diamond diagram with the about-to-move note circled. You can download a pdf of this diagram using this link. 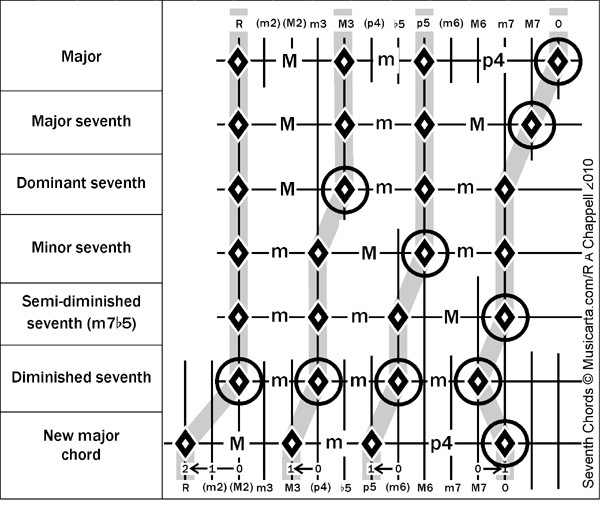 Try to play any series of seventh chords from one major to the next using just this diagram.

You would hope to start actually hearing the series of seven chords as you look at this diagram. You will probably have to practice to make it happen. You can prepare the way by listening to the audio files of the seventh chords ‘evolutions’ in this module with this diagram in front of you.

Moving to the new major chord

Understanding the transition to the new full major chord is essential for cycling smoothly through the two full series (without the music!), which is what you should be aiming for.

Here are four sample bits where you modulate to the next chord. Play through them from the keyboard diagrams (principally) and the diamond-and-line diagram – it expresses what you need to grasp to get the most out of this exercise. 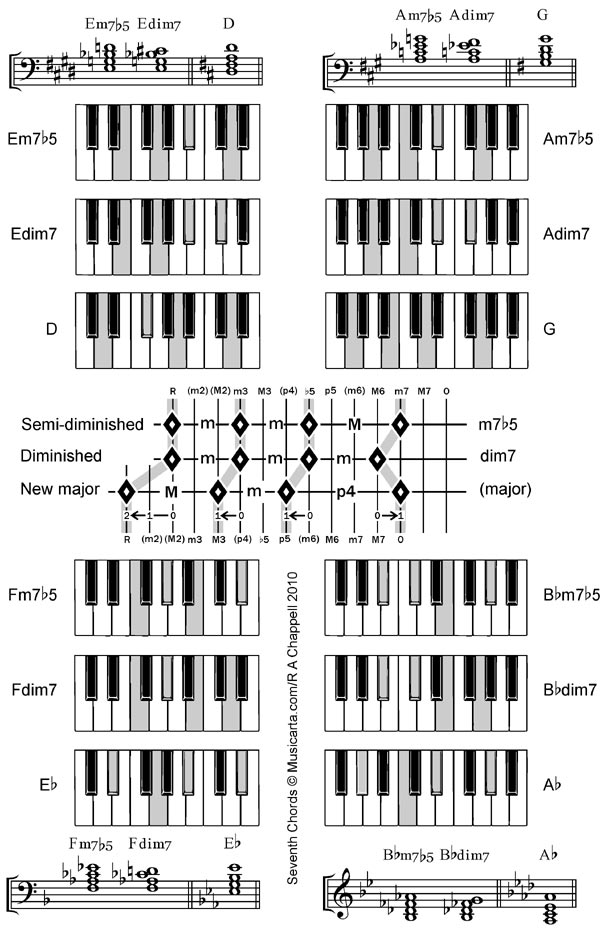 The audio file plays the four modulations (twice each) from the top left going round clockwise. You should aim to be able to match the audio speed.

Tell yourself in plain English what happens to the four chord voices when you finally move to the new major chord:

Using plain language like this helps you learn music by engaging a part of your brain which already works very well.

You can download and print this pdf file using this link so you can work more conveniently at your keyboard.

Learn the easy parts of the full cycle first

There are two easier portions of the full cycle which cover the more common keys and which you should learn first. They are:

Here is a thumbnail of two keyboard diagrams showing four of those portions; E to D with A to G, and D to C with G to F. The two pages in effect join up. 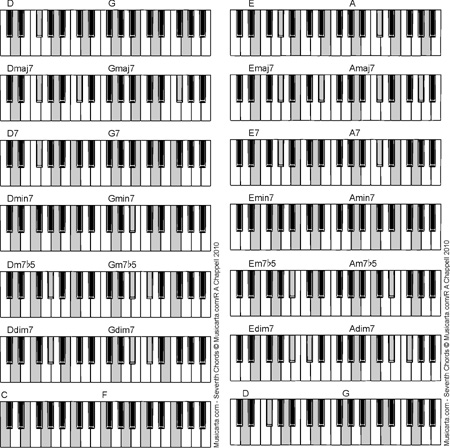 Print these diagrams out full size using these Page One and Page Two links.

Work through the two series (E to C and A to F) with the 'moving note' line-and-diamond diagram in front of you. The music is in the Seventh Chords keyboard drill pdf file you have already printed.

Here are the audio tracks. Audio track one is the E to C series:

Audio track two is the A to F series:

Remember to say the chord types out loud as you play the evolutions or listen to the audio tracks. This helps you recognize the seventh chords when you hear them in popular music.

By working repeatedly through this Musicarta module you can learn to build any type of seventh chord on any root, without any music or diagrams to help you.

You also want to be able to recognise seventh chords by ear. Once you have got the mechanical movement going, concentrate on listening hard and saying the types of chord as you play them.

Eventually you should be able to hear the drill in your head without playing it, and name the different seventh chords as they cycle past.

Note that we have dealt with only root position chords in this module. The seventh chords also appear in inversion – with different chord tones at the bottom – and should be practised as broken chords and arpeggios as well.