The Second Pair of Chords

Like the first module, this module uses the MEPS hand position and rhythmic textures on just two chords to make a piece of music. Again, they are next-door chords – this time, E minor and D major, and the higher chord (E minor) is the home chord. The music in this module therefore has the E minor key signature, which is F sharp.

Here's the teaching video for the build-up to the first version.

Here are illustrations of the two hand positions. Take a moment to look at the semitone counting, which shows the difference between the major and minor chords.

Note that semitones count from zero - like measuring with a ruler, but 'intervals' like 'third' and 'fifth' count from one.

Here is the scrolling-MS video for the rhythmic build-up. The more thoroughly (i.e. the number of times...) you work through this build-up, the surer you progress will be.


Here are the three stages of the build-up, with explanations.

You start with the standard eight-quaver left hand. The right hand melody ‘wobbles’ around the third.

A slight adjustment moves the emphasis in the even-numbered bars onto the notes either side of the third (the fourth and second).

Next, you pull most of the right hand notes forward. This is called 'anticipation' – you anticipate the notes, play them early.

The right hand only plays 'on the beat' at the start of a bar. The rest of the right hand notes are ‘off the beat', on the ‘ands’, and come with LH2.

(Note: The 'count' is for the right hand only.)

The only new music in the video above is the ending.

The ending is what Musicarta MEPS calls a 'ladder' - a rising or falling series of roots and fifths only.

Use the TLR analysis to figure out which hand plays, when.

Here's the teaching video for the ending.

You already have enough material now for a simple version of the module study.

Here's the performance video and the music. 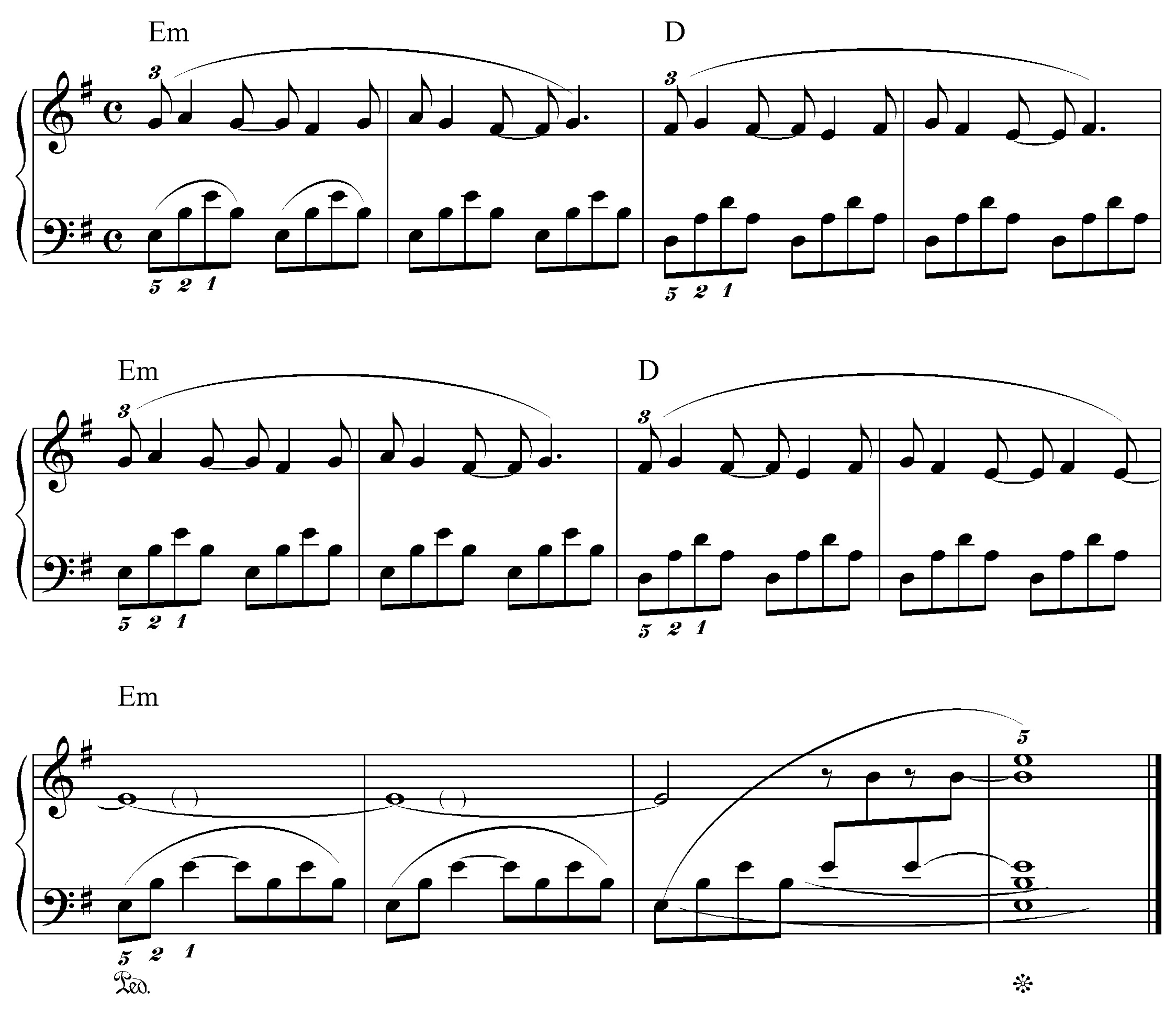 Don't be put off by the complicated-looking music! "It's simple, really"!

This is the same as Version 1, only with the left hand 'dropped quaver' pattern from the Version 1 ending.

Here's the teaching video for this version. You rehearse the same three right hand patterns over the dropped quavers left hand.

The difficulty is to fit the anticipated right hand notes with the dropped quaver left hand. Here's 'what actually happens'.

In between the staves, you see 'the count', which shows you that the left hand drops the "& 3" quavers, and a series of T, L and R letters.

TLR stand for Together, Left and Right, and tell you whether the hands play together (T), or just the left hand plays (L), or just the right hand (R).

This is very useful when things get complicated. Go over that section of the teaching video until you have it right. 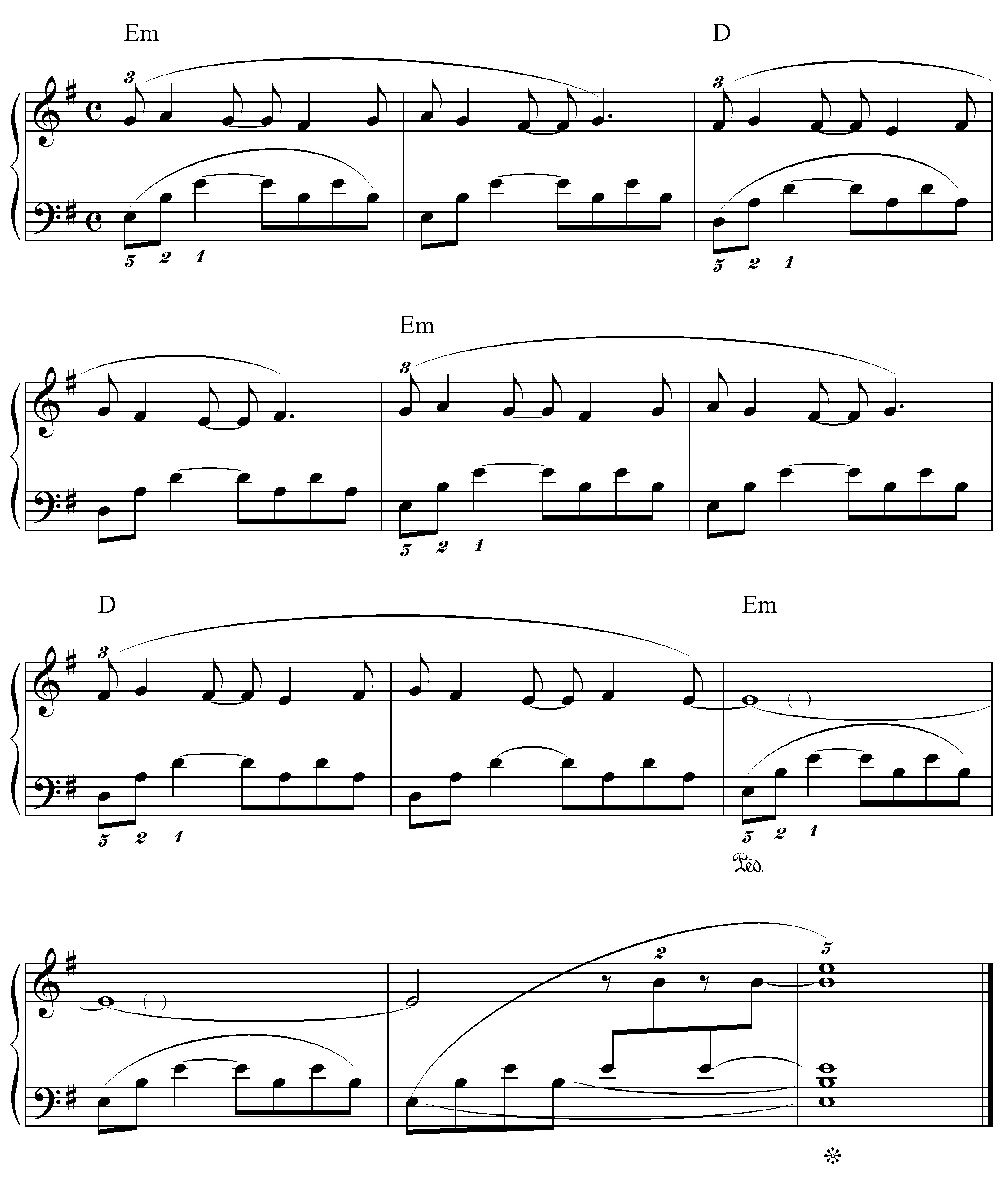 Note: You don't have to 'be able to read music' like a pro to benefit from scanning the music as you listen. You can hear when the music drops from E minor to D major, and goes back, and when you get to the all-E-minor ending.

Have a 'bird's-eye view' like this helps your performance. We mostly stop playing because we've 'forgotten where we are'.

There's an optional, additional development of this riff with 'smoothed' right hand quavers - where the melody frees itself up from the strict quaver beat of the left hand.

Listen to the demonstration of the 'smoothed' vs the 'straight' quavers first, so you know what kind of sound you are looking for.

Here's the teaching video for this rhythmic style.

You will want to practice the 'smoothing' over the Version 1 all-quavers left hand first. 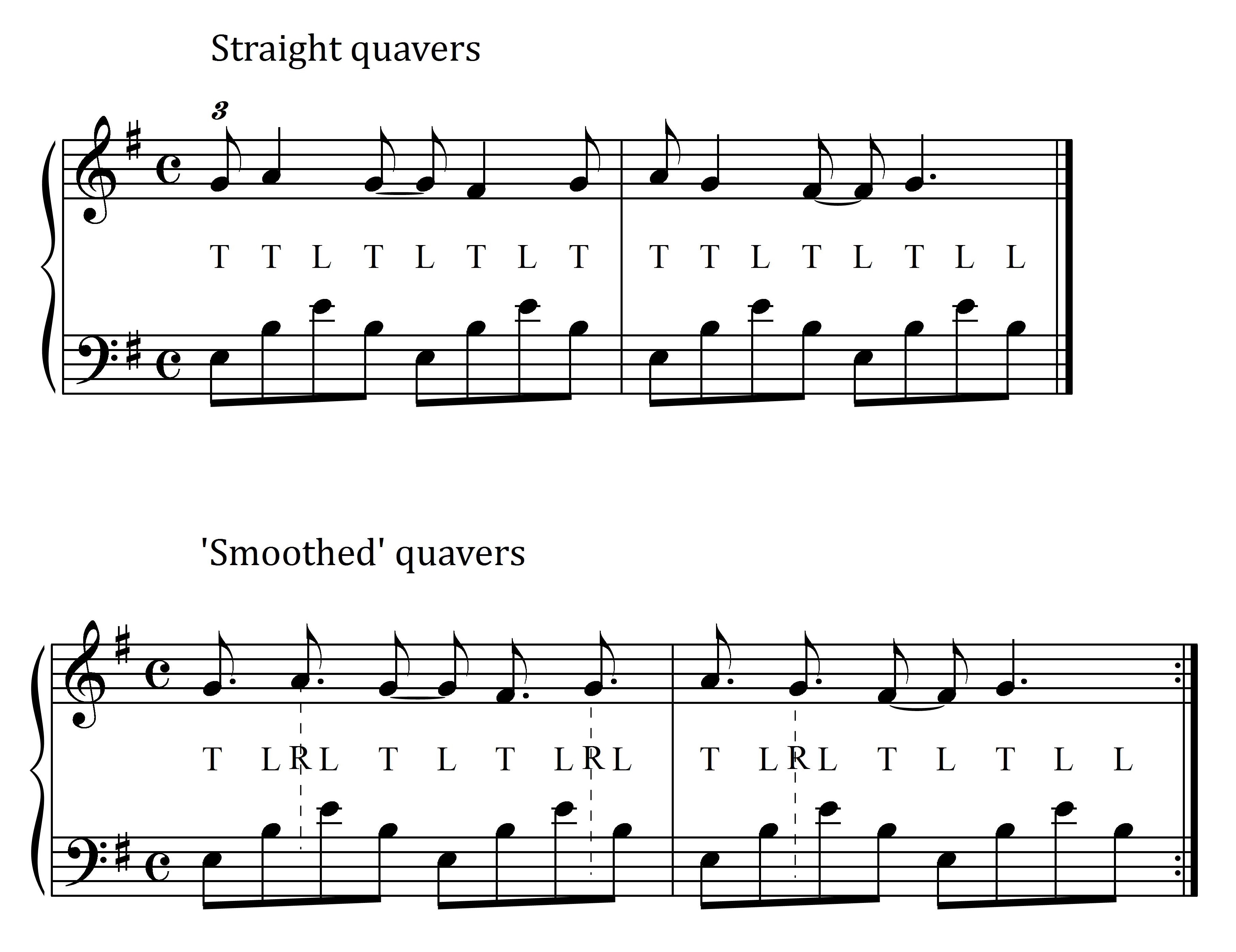 Then practice the  straight quavers/'smoothed' quavers over the left hand 'dropped quavers' version. 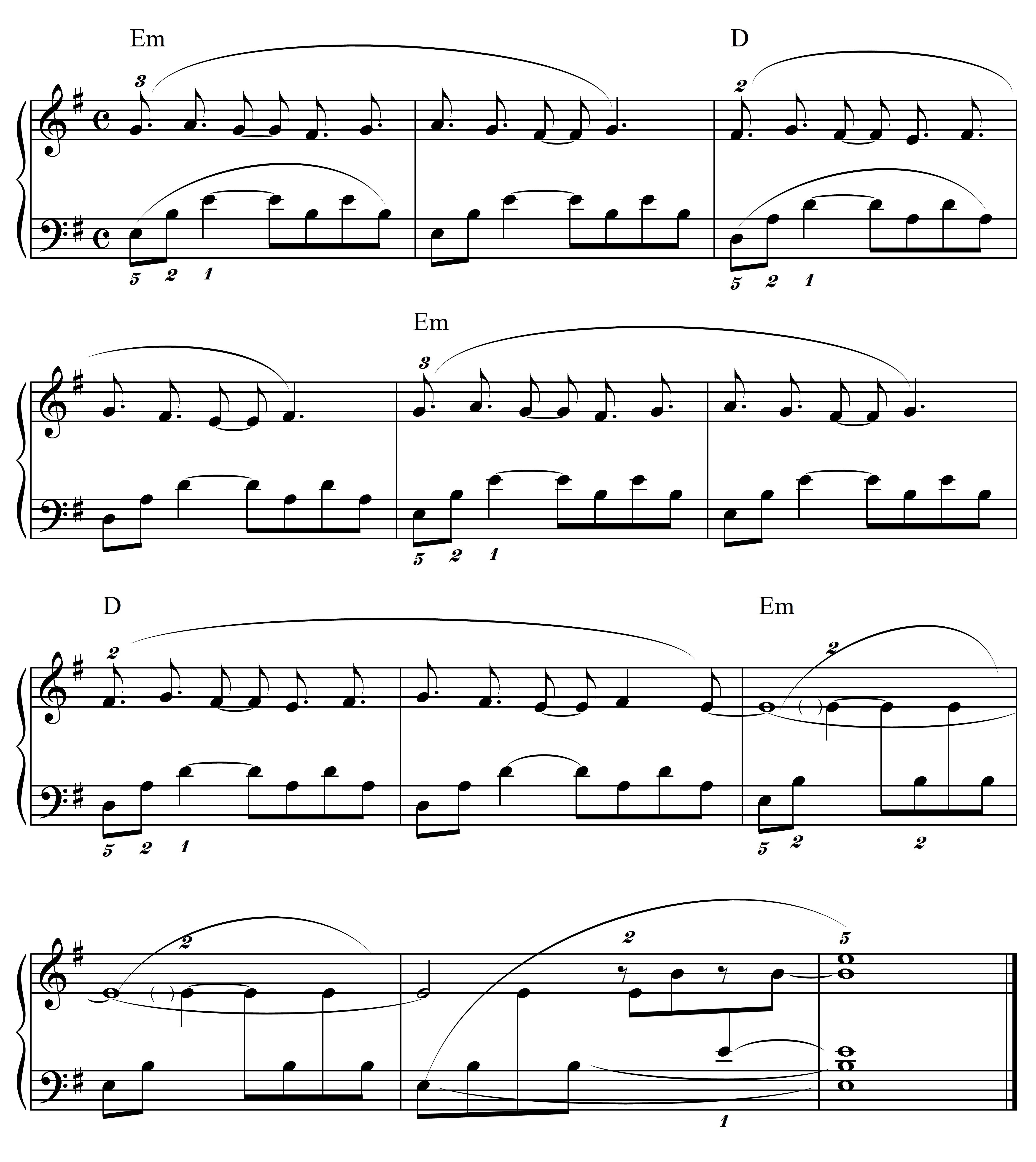 The 'first two pairs of chords' - Lesson One (C and D minor) and Lesson Two (E minor and D) are meant to played as a pair.

Here's a performance of Lessons One and Two of the Musicarta Easy Piano Style workbook.

Next up, time for a theory interlude! Please browse MEPS Three - The MEPS Hand Position before going on to MEPS Four - One Fourth and a Pair.