The MEPS (Musicarta Easy Piano Style) hand position is an excellent way to quickly start making music at the keyboard. Take time to get to know how to find it, and to understand how and why it works.

(This is a reference section - it is not essential for you to work through the module thoroughly at this point. You can skim the contents and make a mental note for a later re-visit, or skip forward to the end of the module for a collection of MEPS hand position graphics.)

If the root (R) is any white piano key except B, you can simply count up five white keys from the root (with the root as “one”) to find your fifth (5).

The other way to check you've got the fifth is to count up seven semitones from the root.

Note that semitones in music are counted from zero (R = 0). This is the only reliable way to find the fifth where the root is a black key or white-key B.

If you put your left little finger (LH5) and your left thumb (LH1) on the note named in the chord symbol (the root/‘name-note’), your left hand index finger (LH2) will probably fall over the fifth anyway – as shown in the photo above.

The MEPS left hand plays two roots and the fifth. On their own, these notes do not make a satisfactory chord. There is one vital chord tone missing – the third – still to be found.

The only reliable way to count up to the third (from the root or octave) is in semitones, because the third is different in minor as compared with major chords, and there are no general rules about 'what it looks like' to guide you.

Unlike scale tones, semitones are counted from zero – like measuring with a ruler. 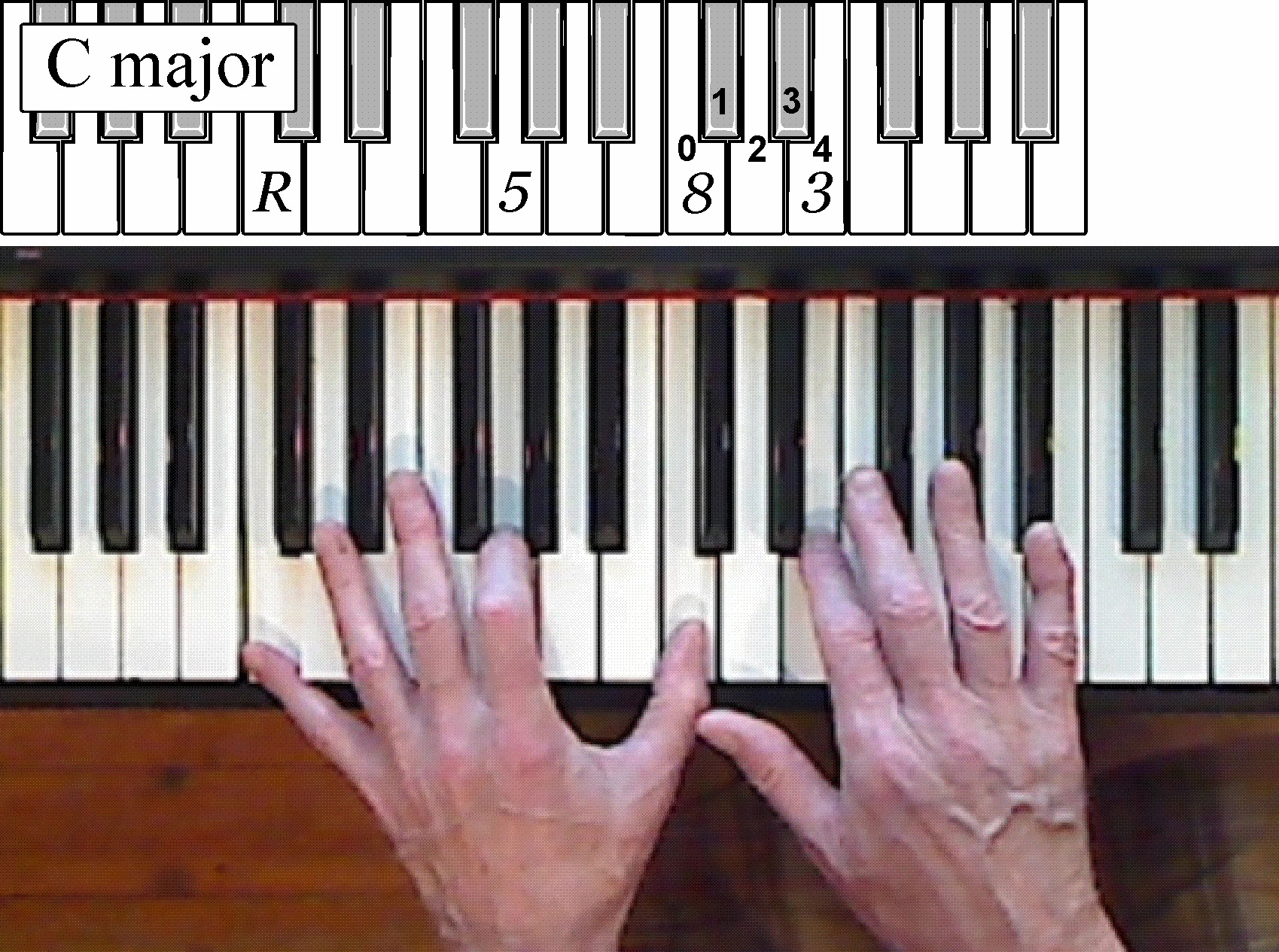 Here's the third in D major. 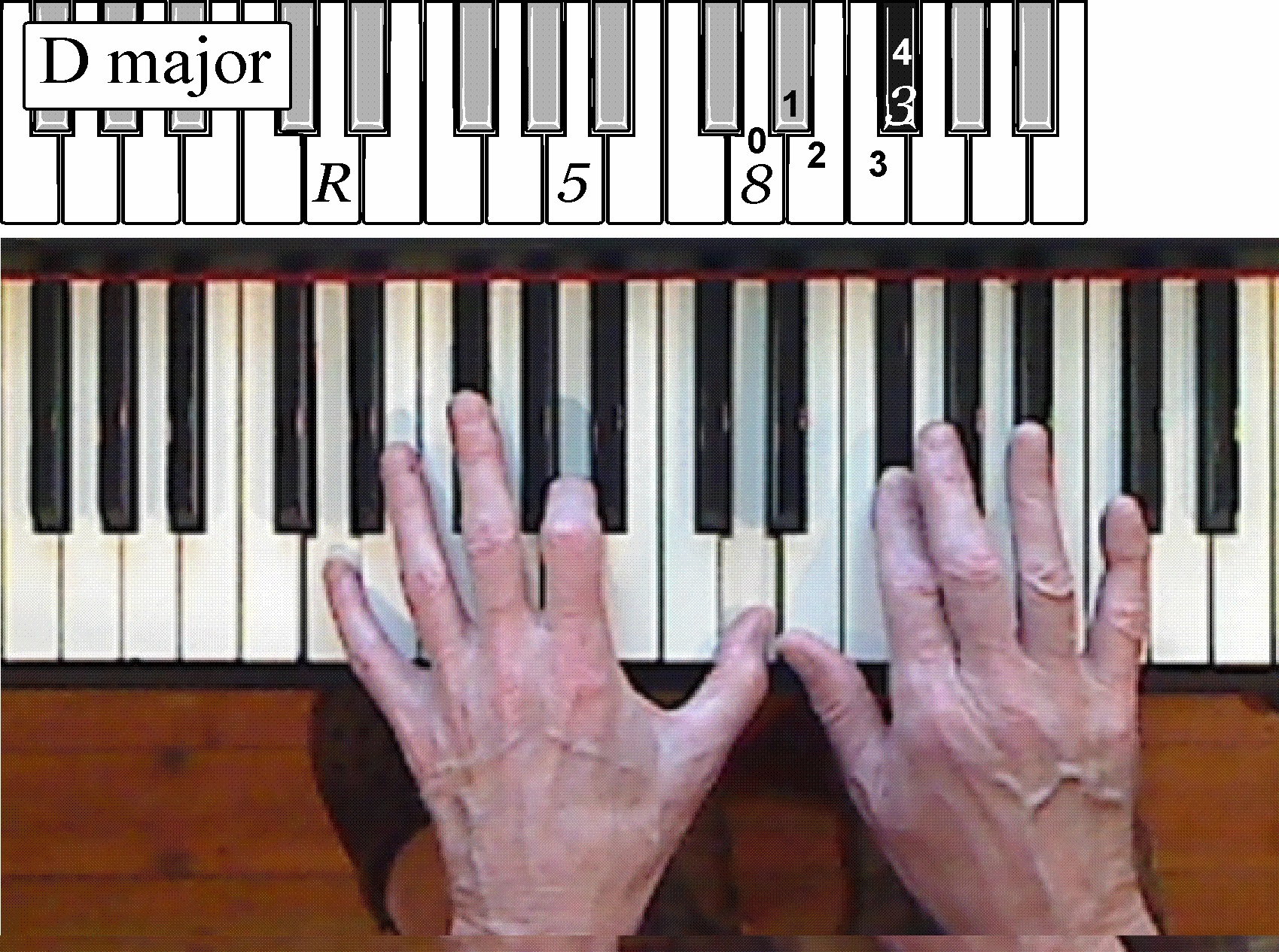 If the chord is minor (Dm, Am – for D minor, A minor etc.), the third is only three semitones above the root. 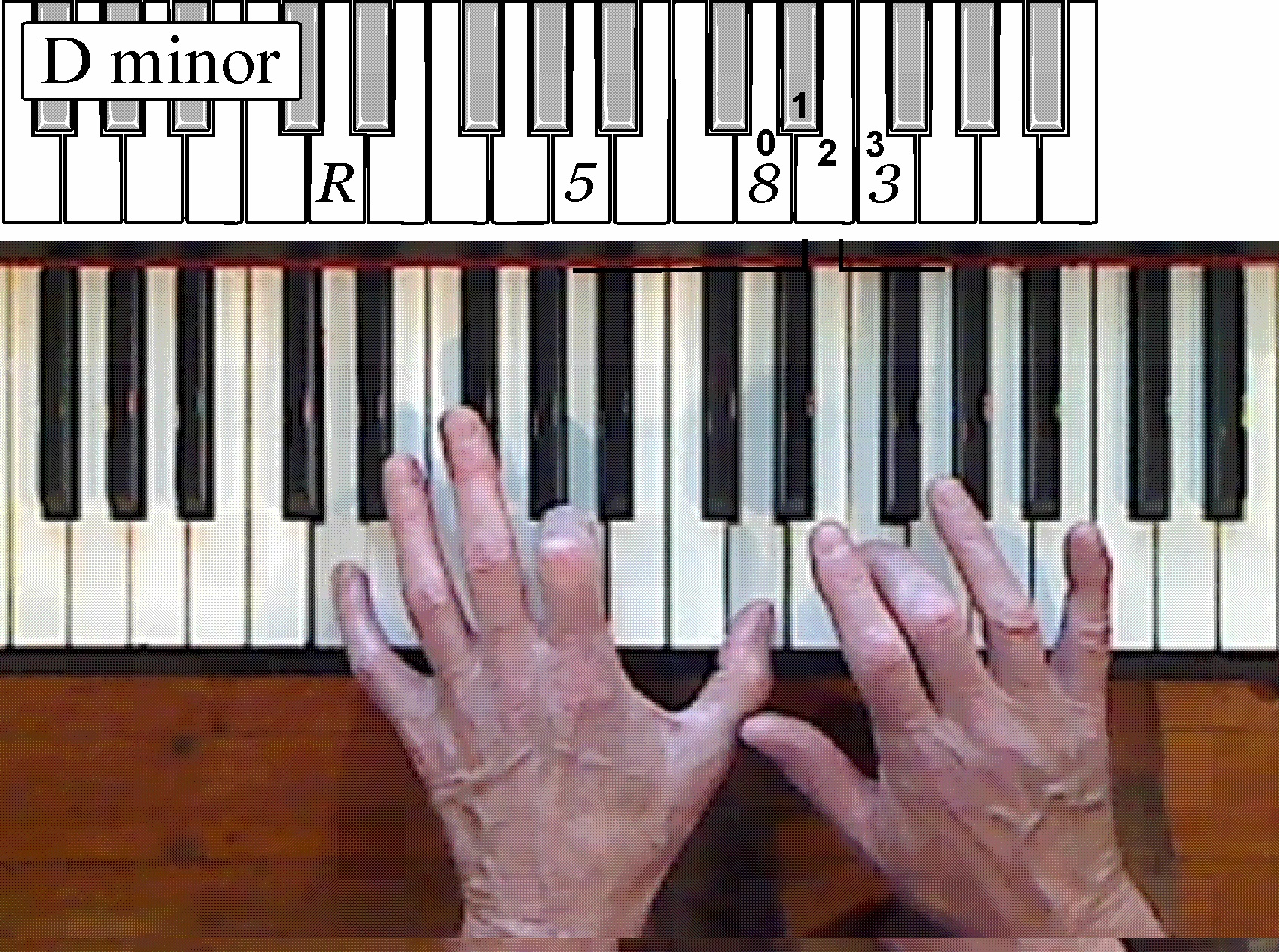 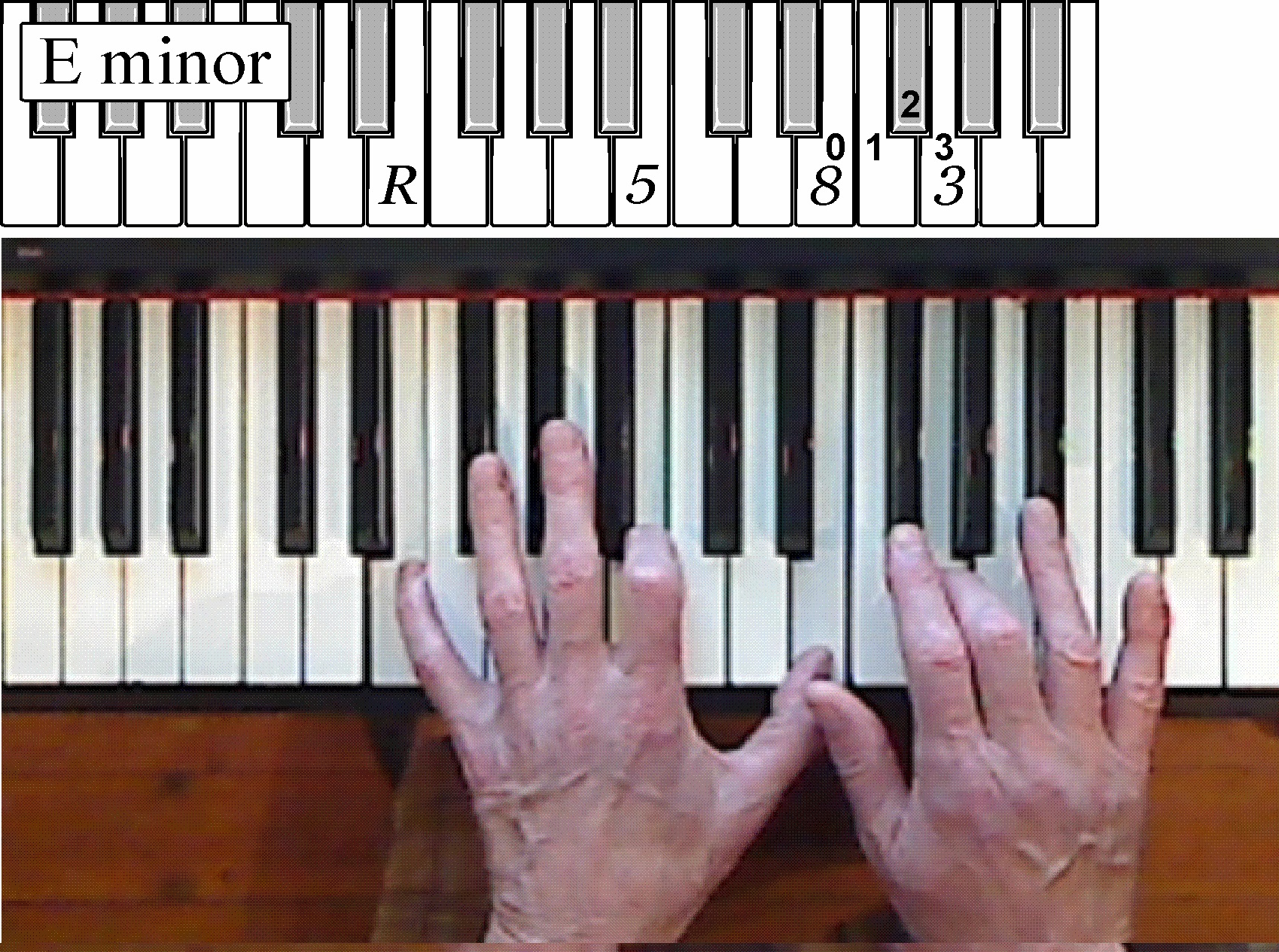 In the Musicarta Easy Piano Style, the left hand usually just rocks from side to side, playing its three notes (root, fifth, octave) in quavers in a simple bottom, middle, top, middle (B, M, T, M) sequence. 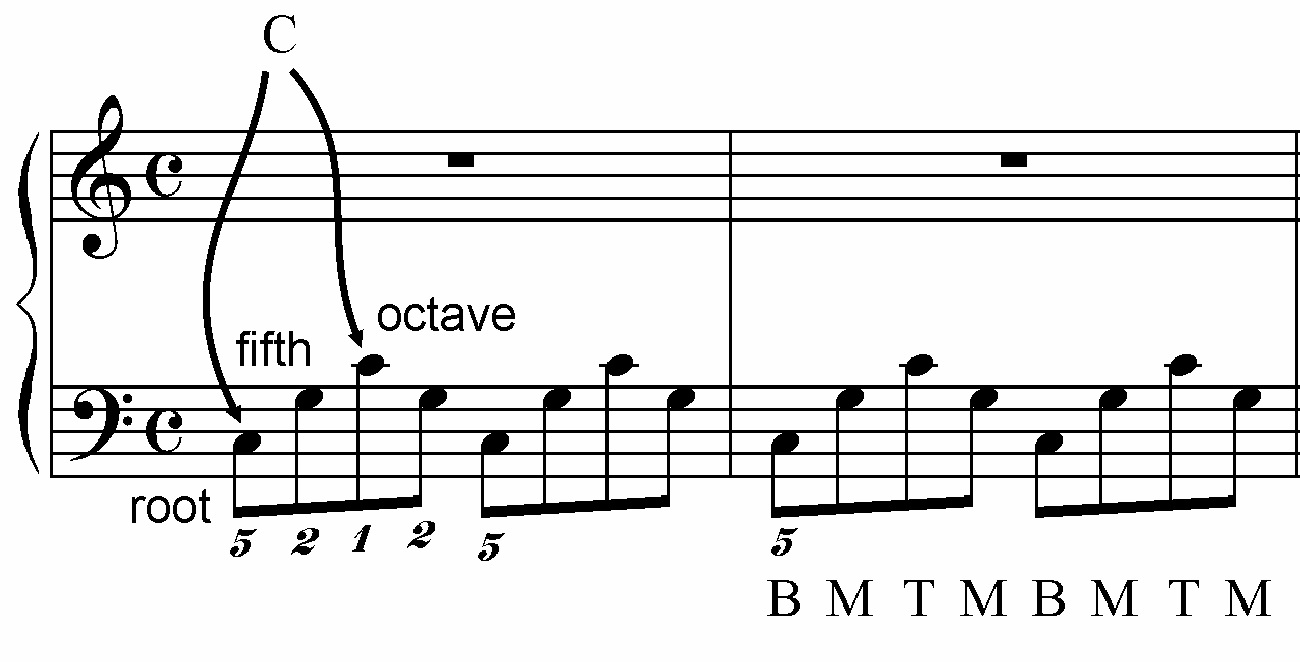 The notes (in the first MEPS performances) come "bottom, middle, top, middle..." (BMTM), but many variations are possible.

One advantage of the MEPS left hand texture – especially when you come to play syncopated, off-the-beat right hand material – is that you can easily use it to find ‘the counts’

So any off-the-beat, syncopated right hand notes – those on ‘&’ in the example below – will come at the same time as LH2, not with the little finger or thumb.

Counting beats is essential in music. Don't be put off by the written music - it's easy enough to see how the notes align vertically, which is the important thing.

You'll have seen and heard all these elements demonstrated in the teaching videos.

Now go on to MEPS Module Four - One Fourth and a Pair.