Playing the same musical material in a different key – that is, in a different place on the keyboard – helps you appreciate its structure, and to become, eventually, a far more creative musician.

To demonstrate the versatility of the MEPS ‘find and play’ hand position and texture, this module presents the ‘Three Fourths’ material in E minor and in six-eight time, with several variations.

Watch the video of the module performance.

Here's the first line of the music and the chord sequence.

Expect to see-and-hear how it's ‘the same’ as the previous module’s.

The performance plays the base material (the harmonic ‘theme’) just as in the previous module to start with - followed by two very similar versions in six-eight.

Follow this short video about transposing Three Fourths and a Pair into E minor.

Here's a short video about the difference between four-four and six-eight time.

The music for that:

Six-eight – six quavers in a bar – is technically known as a ‘compound duple time’ time signature.

The six-eight proper ‘out loud’ counting is “One-and-a two-and-a, one-and-a two-and-a", which you see written between the staves, but it's sometimes convenient to talk about the six ‘quaver slots’ marked up below.

Here's the module performance again, show on the virtual keyboard.

Copy the video and play the first eight bars. 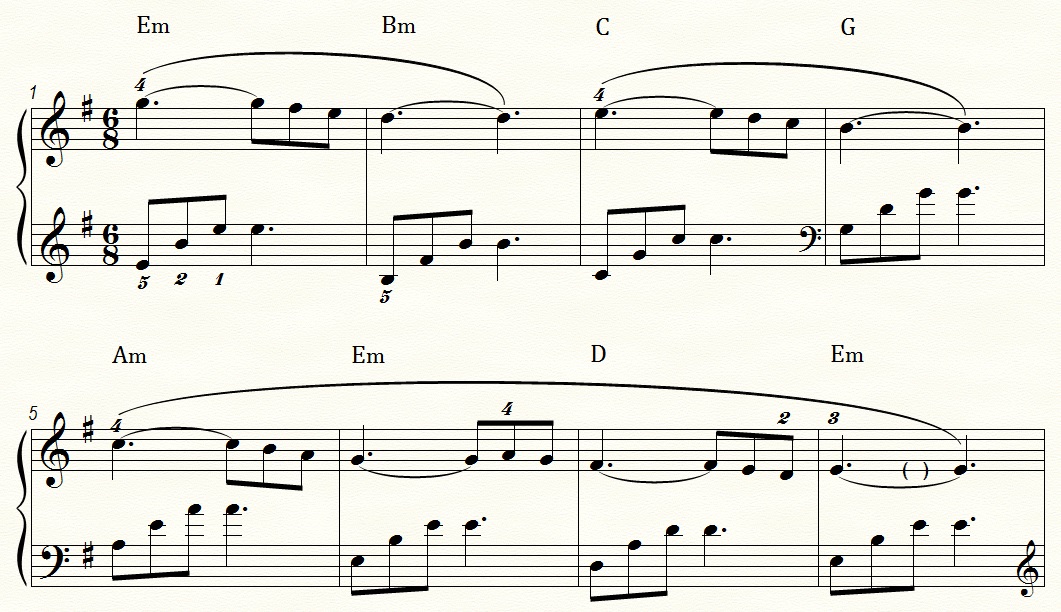 The second eight bars has a more varied left hand. 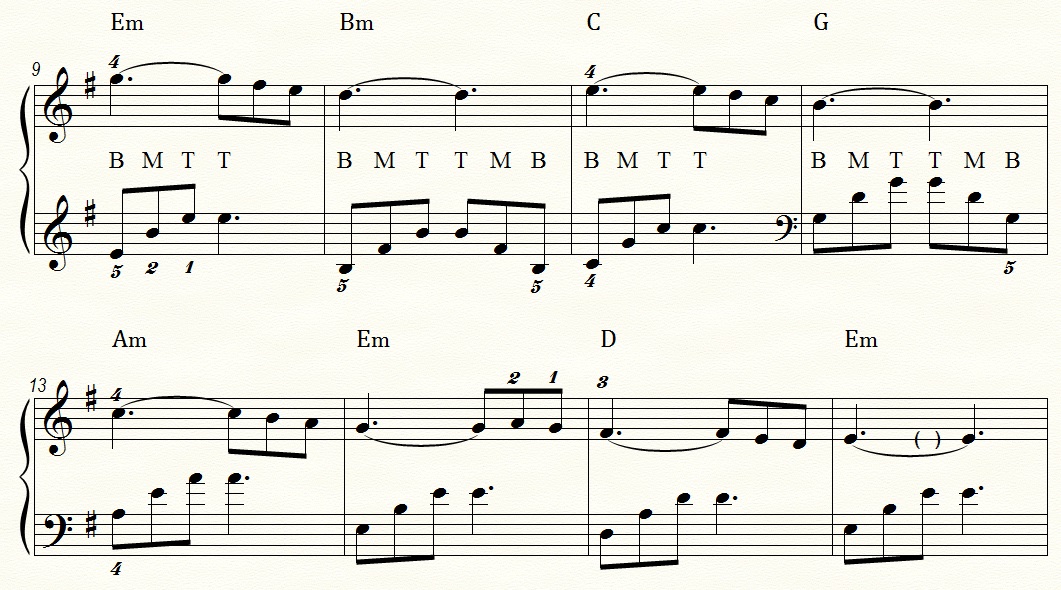 The marking 'rall.' is short for 'rallentando', the Italian for 'slowing down'.

The 'shake' in the right hand takes some practice. You get better at 'ornaments' like these your whole life!

A willingness to play around with the keyboard texture of material while leaving its harmony fundamentally unchanged lies at the heart of the creative keyboard work.

Listen to this variation on the module performance and see if you can spot the difference.

The difference is that the left hand thumb notes have all been tied. Here is the music. 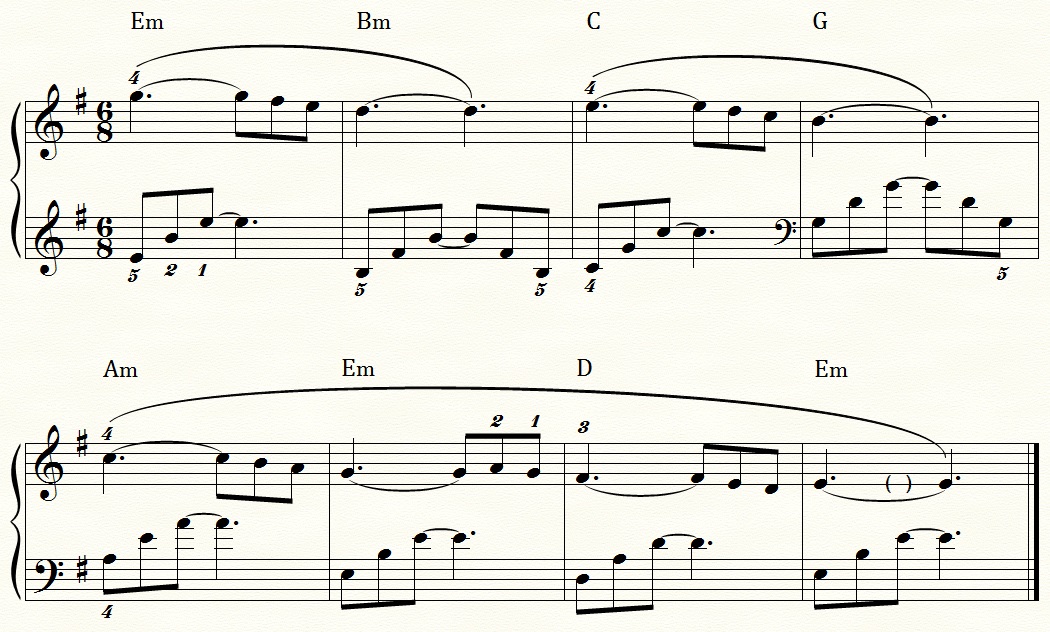 In practice, you’d probably have some of the LH thumbs tied and some not. Here’s one possible mix. 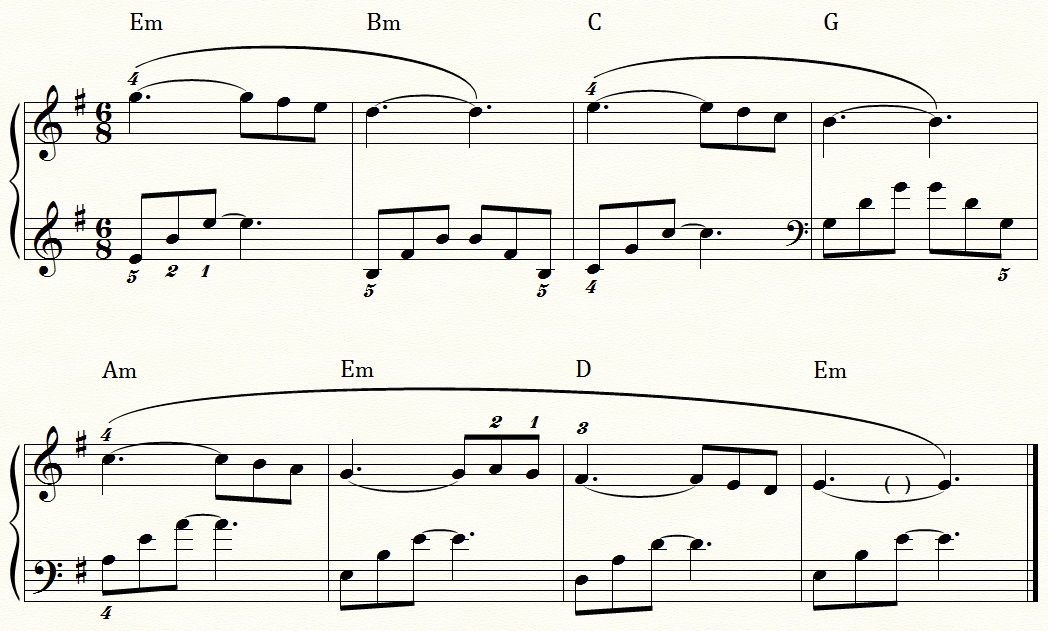 The 'rule' here is that the left hand thumbs are only tied where there is more than one note per bar in the right hand.

Now that the tied thumb has freed up quaver slot 4, you could un-tie the treble note in that slot and play it again. 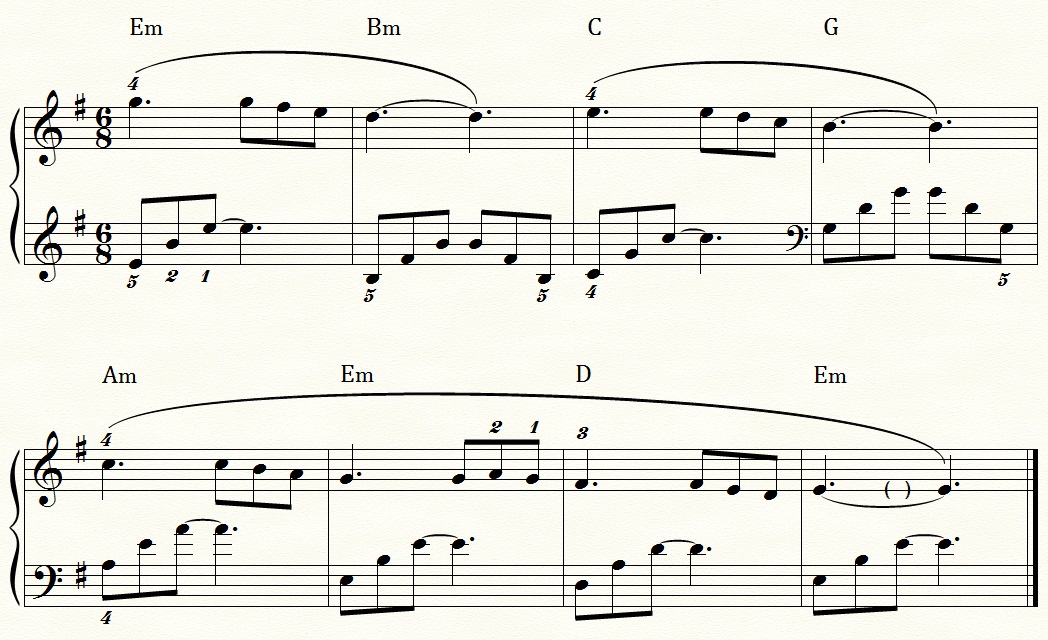 Here’s a variation which turns the left hand part upside down and plays top-middle-bottom (TMB) instead of bottom-middle-top (BMT). 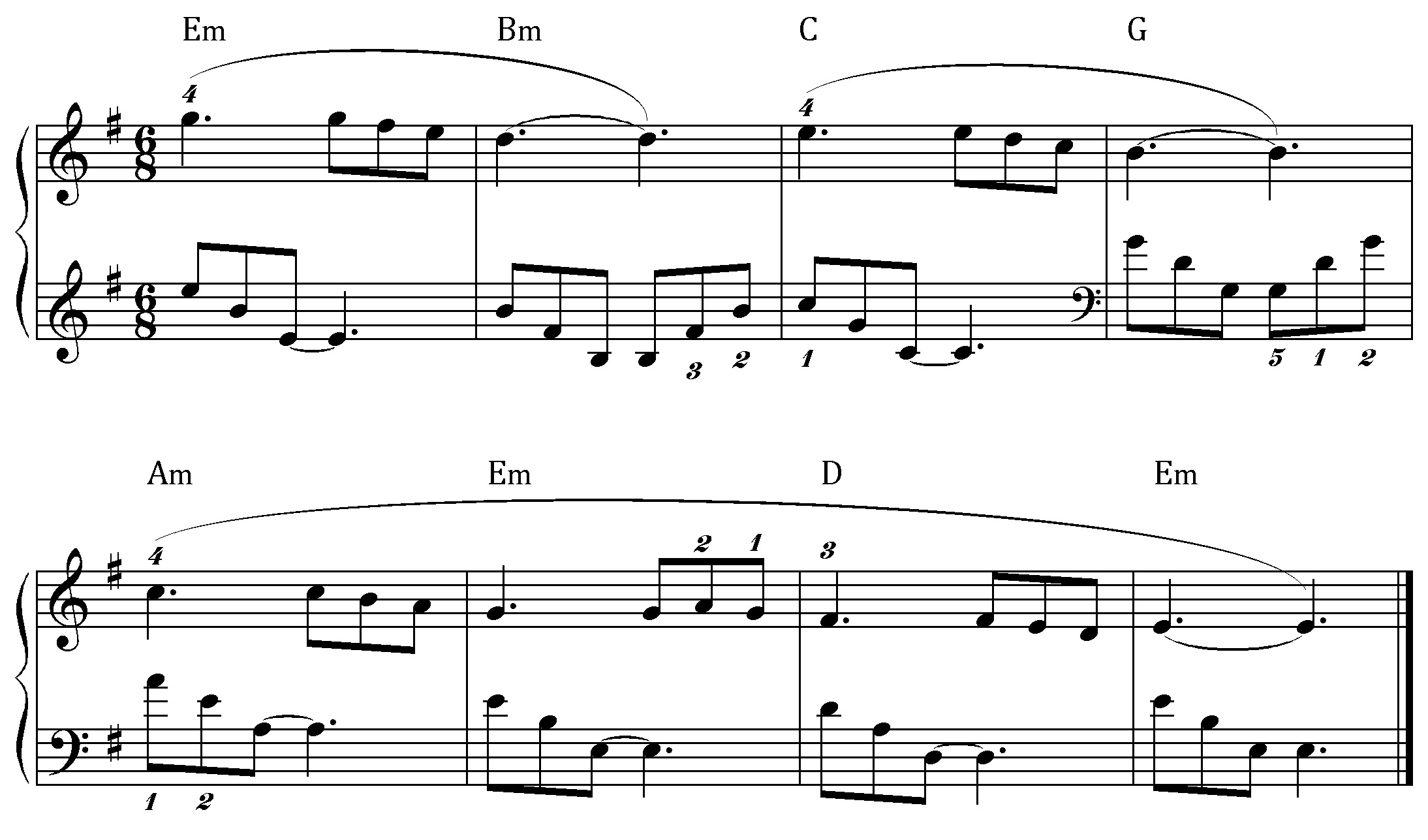 Most improvisations and compositions evolve like this – through a series of small developments of already-known material. Here’s a whole version built on this pattern.

Note the way the material gets back round to its repeat (bars 8 and 9), and how the extended ending uses the typical ‘ladder’ tricks in new ways.

Now listen to this version. Something's changed in the right hand (melody).

AUDIO COMING Make by 'saving as audio only' in ?Video Pad?

The three right hand joining-up notes that you use to walk between the thirds in the right hand have been re-ordered.

Here are the original and the new version of the first (Em–Bm) chord change played alternately so that you can compare them clearly.

Here's the MS of that exercise.

Work out how the second and third strings of joining-up notes (C down to G and Am to Em) will sound, adapted in the same way.

The Em–D–Em section melody is now this.

Here's the full performance of our new melodic variation.

Listen to this version. It's another re-ordering of those three notes.

Here's the Em-Bm exercise for that change.

Even a non-reader can see whether the melody goes to the next-door note, or skips.

Apply that transformation right through to performance - try doing it yourself first - and you'll get this version.

Put together your own variations by:

"You can't make an omelette without breaking eggs!"

You learn to create by creating! 'Mistakes' don't cost you anything except a little time, and one of those 'mistakes' might end up being your favourite version.