Triads in the Treble

In Module Three of the Musicarta Canon Project you add a third note to the right hand thirds to make triads (three-note chords) in the treble. Here is a sample audio performance, showing what can be done with the triads you will learn.

Your browser does not support the video tag.
CPA_M3_01

Listen to the high piano notes in this audio clip. (Ignore the green left hand notes.)

It’s the line of thirds in the treble from Modules One and Two.

Now listen to these treble notes. They are slightly different.

The sound is ‘filled out’. A third note has been added below the thirds.

(Ignore the green left hand notes in the video.)

The third note in the treble chords is what we add to the Canon performance in this module.

Playing the triads with two hands

The easiest way to play the triads is to play the new note with the left hand and the Module One thirds with the right.

You need to know this line of notes by heart!

Play the hands together. This music shows the notes on two treble clef staves, right hand on the top, left hand underneath. This makes it obvious which hand plays what. The hands are still right next to each other on the keyboard.

You can start playing variations right away by ‘waggling’ the triads as you did the thirds in Module One. Your part is shown on the (upper) treble clef stave of the following music, with the RH notes stems up, LH notes stems down. Listen to the audio performance files (with chord accompaniment) and study the music of the following examples. Watch the MIDI performance on MidiPiano for more clarity. Play along with a backing track recordings, or with a friend playing the accompaniment. 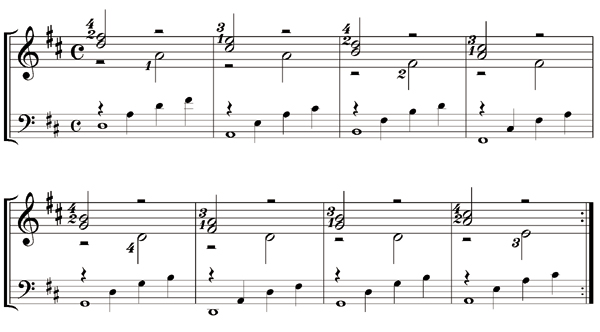 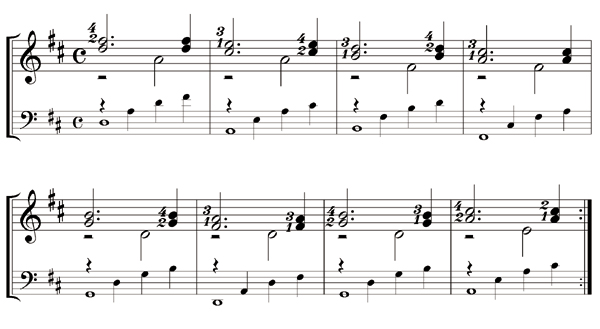 For another variation, you can simply alternate left and right hands twice as quickly.

The variations so far have split the three notes of the triad two notes with the right hand and one with the left. You can divide them the other way as well, like this.

This makes it much easier to play extra notes in the top voice (line of notes).

Double the left hand changing speed and use a ‘next door note’ pattern from the previous modules in the right hand. 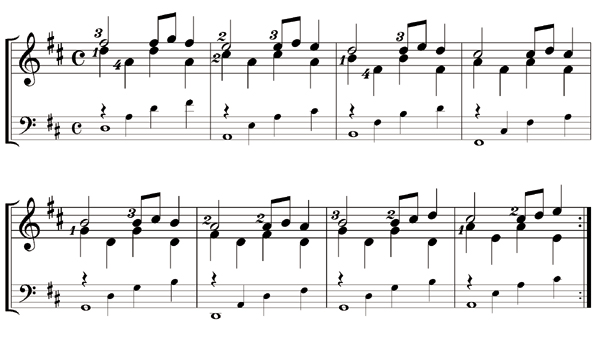 This is how the creative musician thinks - in terms of the basics behind the patterns.

Listen to the practice tempo audio file and copy the performance. Fill the full eight bars with the same pattern. Leave out the ‘tweaks’ in bars seven and eight, if you want to.

Build up to performance tempo and play over your backing track or recording. The audio is up to speed; the MIDI file, which you can study on MidiPiano and play as audio, is at practice speed.

Musicarta is committed to helping you cultivate a habit of ‘messing around with chords’, so that whenever you see a triad, your fingers will automatically start bringing it to life with a rhythmic waggle (for example), or an exploration of what the next-door notes can add to the performance – the basis of successful pop keyboard improvisation.

Listen to this audio performance clip.

It’s a two-bar pattern, nearly the same as the previous one, but some notes are missed out in both hands.

Listen carefully and try to play the pattern. Remember, you can use your media player controls to listen to the clip over and over and slow it down.

The written-out music is in the Answers section of your workbook and at the foot of this page along with the MidiPiano performance.

The module performance ‘mixes and matches’ the various keyboard textures you have learned in this module. Listen to it again and see if you can play it by ear.

The reference number is for the MIDI file to play on MidiPiano.

If you double-click on one of the MIDI files in your Canon Project MIDI file folder, Windows Media Player (WMP) - and some other media players - will automatically play it as an audio file.

You can set WMP to automatically repeat a track by pressing Ctrl+T, checking ‘Repeat’ in the Play menu or using the arrowed circle on the control bar. MidiPiano also has an auto-repeat button. Either of these applications will give you a basic, hassle-free play-along track.

You can also slow down (or speed up) a performance in MidiPiano using the ‘Speed’ slider, and in WMP via ‘View’>‘Enhancements’>‘Play speed settings’.

Here are the music and MidiPiano video of your module audio challenge.

Play the treble part with two hands over a backing track or commercial recording.