Being able to make inversions of the chords in a chord sequence is a cornerstone of creative keyboard technique. Triads can be ‘flipped’ into their inversions by taking the top note(s) to the bottom or the bottom note(s) to the top. Different inversions often create quite different realizations of a chord sequence. In addition, chord tones can be divided between the hands in any number of different ways, and the rhythmic textures that can be used are practically infinite. Module Fourteen of the Musicarta Canon Project explores some of these possibilities.

Here is the module performance.

New inversions of the Canon triads

Here is a demonstration that recaps how the triads we have been using up to now were put together, and shows how to make different inversions of the chords – to play in the left hand, for this module.

Listen to the audio and watch the performance on MidiPiano. You see-and-hear eight sections.

1. The original string of thirds, here played top note in the right hand, bottom note in the left.

2. The third note of the triads.

3. These two put together to make triads, still split between the hands.

4. The triads played with just the right hand.

5. The string of thirds, split between the hands, played an octave lower.

6. The same third note (to make the triad) as before, but now above the thirds, and played in the right hand.

7. These two put together to make new inversions of the triads, still split between the hands.

8. The new triads played in the left hand.

Without trying to play, read the list as you listen to the audio clip, matching the sections as you hear them with the numbered items on the list. Then watch the MIDI performance on MidiPiano with the list in front of you so you can check you understand the ‘which-hand-plays-what’ descriptions of the eight sections.

Maximize your understanding by doing each of these tasks at least twice. 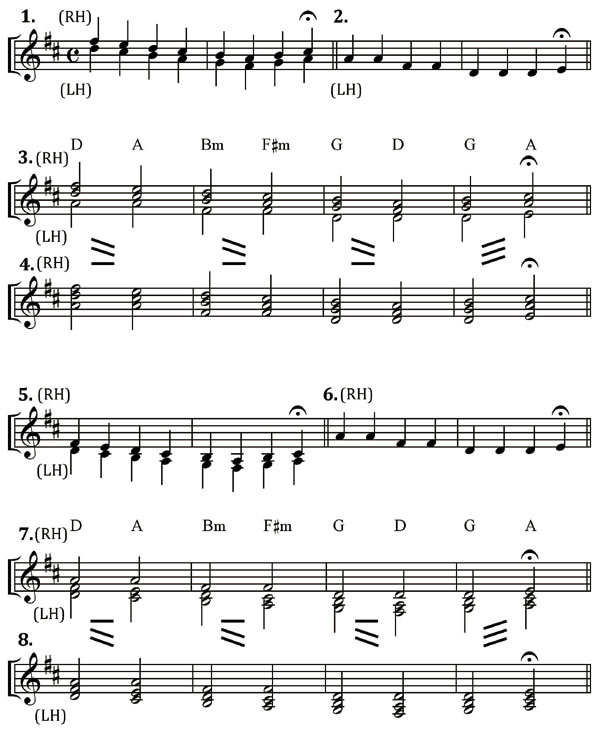 Now try to play the eight sections. If you play the MIDI file, either in MidiPiano or in Windows Media Player (or similar), you can slow down the performance and pause after each section to give yourself more time.

The note-that-stays-the-same (flat line) is now at the top instead of at the bottom. See if you can hear that in the audio file:

Watch the MIDI file in MidiPiano to clarify.

Finger the new string of triads sensibly, using fingers 2–4 and 3–5 to allow smooth movement in the pairs.

Playing a melodic variation by ear

Listen to this audio clip.

It’s the new inversions of the first pair of chords in the Canon chord sequence (D and A) played in the left hand, with a simple melody fragment played in the right hand. The right hand plays the ‘model’ for the variation we are creating in this module.

You may be able to play the chords-plus-melody fragment straight off, or you may need to use the Module Thirteen ‘contour’ method to be able to play it. Read through the following instructions anyway – it will be your working method for more and more difficult challenges.

The rhythm is quite simple. Listen again and try to ‘tap it out’. The left hand plays the first two triads from the new inverted string, one per (four-count) bar. What does the right hand do? Here’s the beat map for the fragment, which gives the melodic (RH) fragment rhythm:

The audio of the beat map has a ‘click track’ to help you keep time. Jot down the right hand rhythm (four crotchets/quarter notes, two minims/half notes) on a piece of paper for the next stage.

Now listen to the audio clip again to identify the up/down/same melodic profile of the segment.

Put arrows between the notes of your beat map, listening repeatedly to make sure you’ve got it right. Remember that the arrows don’t have to show by how much the melody goes up or down.

Here’s the audio again. Listen to it as you study the beat-map-with-arrows until you can see-and-hear how the two match up.

Attach the melodic profile to the actual chords

Now we know the rhythm and the melodic shape of the pattern, we have to ‘attach’ it to the first pair of chords – D major and A major – and find out which actual notes to play.

Transferring the pattern to the other chords

As in Module Thirteen, you can use the regular structure of the Canon chord sequence to get a whole chorus out of the work you’ve just done. To make that work, you now have to strip out the actual chords and think in terms of ‘any pair of chords’.

Here is the audio of the pattern in the next (second) pair of chords – B minor and F sharp minor.

Here is the audio of the pattern in the third pair of chords – G and D major.

From the beginning, the performance so far sounds like this.

You hear in this audio how a bit of delay and anticipation naturally creeps in, making the riff sound quite ‘pop-py’. If the clip sounds familiar, it’s because the Canon chord sequence has been re-used countless times by songwriters and composers.

The last pair of chords

The melody for the last pair of chords starts the same way – from the third of G (note B). But following our up/down pattern doesn’t get us to an A major chord tone in the final bar, but to note D – the fourth, counting up from A.

A suspension, in other words. The suspension can resolve simply to the third in the same rhythmic pattern as before:

The melodic contour for that music is the same as for the first three pairs. Listen to the audio again and check.

Or you can be a bit more adventurous and fill the last bar with crotchets (quarter notes).

The suspension resolves, then you climb back up to the starting note for the next chorus. The left hand walks up in tenths. Try to ‘just think’ the up/down arrows – for both left and right hands – into this last-pair beat map.

You now have all the components of the module performance.

Listen out for these features to copy:

Here is the MidiPiano performance of the audio clip challenge.

our module transposing challenge is to play the module performance in the keys of G and C. The more keys you play a chord sequence in, the more you see the pattern in it and the more able you are to ‘just sit down and play’.

Here’s the module performance in G.

To prepare, repeat the triad inversion process in G.

You remember the Canon chord sequence in the Roman numeral system.

Transpose the module performance into C as well.

Prepare by repeating the triad inversion process in C.

Keep in mind the ‘contour’ features of the 2-bar melodic model – its shape and what chord tone it starts on. The melodic fragment we’re modelling:

This module represents a great deal of work and a high level of accomplishment, but the tasks set are achievable because they build on what you already know.

Nevertheless, you should expect to come back to this module many times before you can ‘just do it’. Working through this material again will never be time wasted.