Playing the accompaniment with the left hand 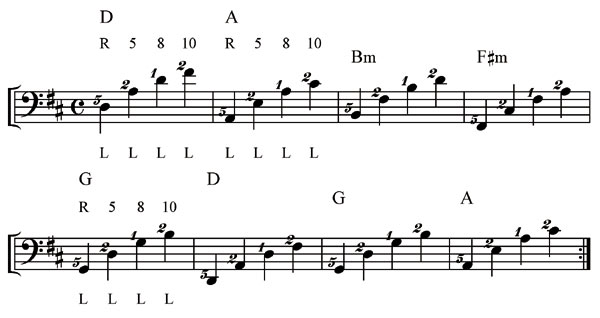 When you play a solo version of the Canon, the right hand plays the more interesting, more complicated music, so the left hand has to be practically automatic. Only lots of practice makes finding the R, 5, 8, 10 chord tones with the left hand alone, easy.

You will find three pages of left hand accompaniment practice patterns (PP) in the Accompaniment Practice Patterns supplement at the back of this book. Practise each exercise on a number of different chords – use the R, 5, 8, 10 coding to find the right notes.

You are going to play a solo Canon versions made from the new LH solo bass accompaniment pattern plus the thirds from Module One. 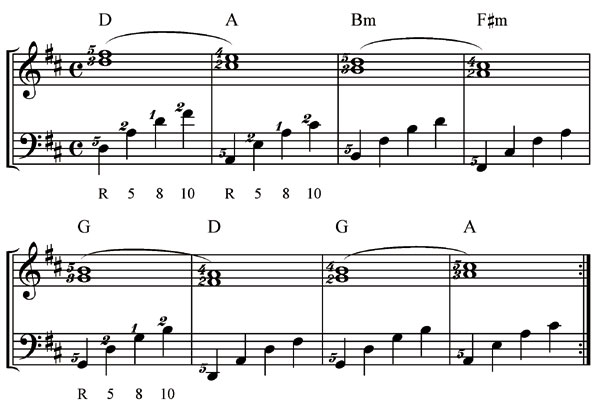 Continue the pattern right through the chord sequence.

Next, keep the broken third but add a ‘next-door note’ 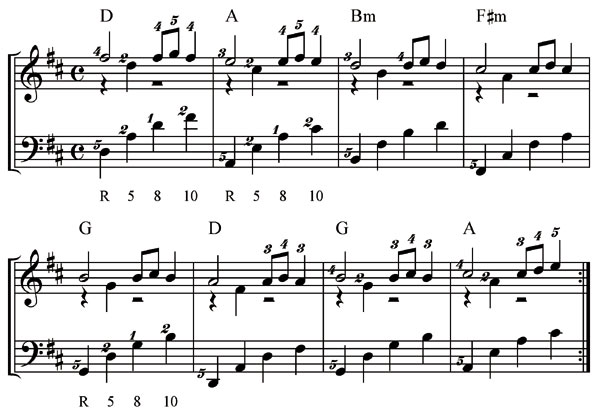 You can make a very nice Canon variation just by syncopating the thirds.

When you have to tackle a complicated rhythm like this, stop and look-and-listen closely until you’re sure you know ‘what comes with what’ – whether your hands play together (T), or just the left hand (L) plays, or just the right (R).

This is ‘Together, left, right’ (TLR) analysis.

To learn to play such a pattern, abandon the rhythm temporarily and concentrate on finding the notes and getting the together, left, right ‘events’ in the right order, Then, gradually ‘feed’ the rhythm and tempo back in.

Here the TLR analysis (and the counting) for the solo syncopated thirds performance.

You play something on every quaver beat, but you only play hands together (T) on count “one”.

Listen to this development of the M8_06 pattern.

It should be familiar – it’s actually a Module Two pattern with the thirds 'rolled' (broken up top-bottom).

But it sounds rather mechanical - it needs more variety.

By dropping some notes, we have made the pattern a two-bar pattern - it only repeats every two bars. The listener's 'ear' gets a rest, and it's more musical.

This is the pattern for your audio challenge.

Playing by ear requires you to listen carefully for up/down/same movement between melody notes.

Next, we note that it's recurring two-bar pattern, so we really only have to work out one two-bar section, like this.

Then we would want to establish the rhythm of the notes, if at all possible.

Count along and you get this rhythm.

So you would sketch that out, just as a rhythm. If you don't write music at all, just a row of notes proportionally spaced out will do.

Next, you try to insert arrows to indicate whether the melody stays the same, or goes up, or goes down.

The movement in this pattern (throughout the chorus) is to next-door notes.

Put arrows between or above-and-between the notes to indicate whether you thin the tune repeats the same note, or goes up, or goes down.

Go to 'Answers' below to check your work.

At the end of the chorus, the roots go up from G to A, so the melody pattern rises instead of falling - and there's a 'tweak' to get back to the F sharp at the start of the next chorus smoothly.

The rhythm is just the same, though, so you can sketch out the same line of notes to put your arrows in.

Listen to the audio and put your arrows in, then check the answer below.

This is the right sequence of arrows for the main two-bar pattern. Let the audio repeat until you can see that it's the right answer.

We know that out pattern is based on our string of thirds, and starts on the top note (because we cut out the bottom one, remember).

Now repeat the pattern in the first position (repeat the first two bars) - so starting on F sharp. Just the right hand first, then with the left hand.

To smooth out the melody line the last two bars (chords G and A) have to be adjusted, because the roots move up. This is what you should have.

Play the pattern from the arrows, starting on B.

Now put the rolled thirds back in and play the whole chorus over the left hand root0fith-octave-tenth accompaniment. 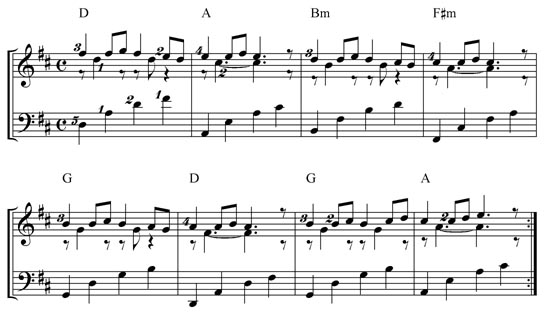 Hearing the ‘contour’ (the vertical shape) of a melody line as a series of ‘same’ ‘up’ or ‘down’ movements is an important part of building your ‘playing by ear’ skills. Think of using arrows as a form of shorthand to sketch out (and make a record of) your own or someone else’s melody lines.

Study tip  Always have a pencil by your keyboard and never be afraid to write on music – you can always rub it out!