Most of the music you hear – classical, jazz or pop – is based on a harmonic driver known as the Circle of Fifths – a cadencing circuit with the roots falling a fifth. Modes on the other hand are great at providing harmonious strings of chords where the root falls a fourth (the ‘Circle of Fourths’*)

Modes Dairy 08-07-14 (the chorus of a song called ‘Now That I've Found You’) is a case in point, and showcases a five-chord ‘Circle of Fourths’ string of chords.

*Caution advised! Some music authorities use ‘circle of fourths’ where circle of fifths has traditionally been used (the fourth being a fifth inverted). Musicarta uses ‘Circle of Fourths’ to mean a string of plagal cadences on the model of subdominant to dominant, IV–I, major or minor.

Here's a video of the full performance

Here’s the MS with the mp3 clip below. 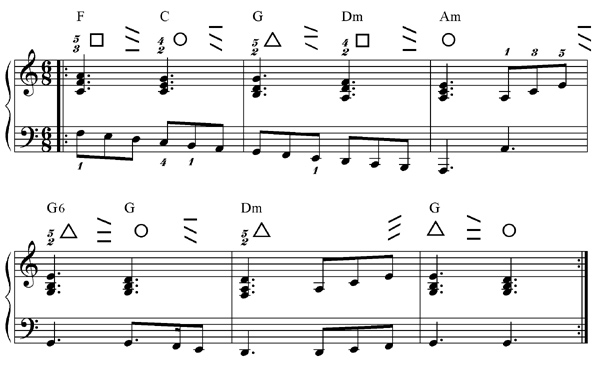 (* Note that the triangle inversion symbol in bar 4 refers only
to the inversion shape. The triad is not a G chord.)

Practice methodically to get to grips with this long string of chords.

If G really were the home chord, this would be Mixolydian, counted ëVII–IV–I.

If D minor were the home chord, this would be Dorian, counted ëIII–ëVII–IV–i. (See Modes Diary 24-06-14 for a riff using this four-chord string as a Dorian construction.)

Add the two together to make a practice riff.

You will notice that any of these riffs works on its own – and could be just the length for your latest song or composition!

Here are some other options around this chord sequence for you to play with.

The bass line in the examples above is shown continuously descending to demonstrate the falling-a-fourth character of the IV–I (plagal) cadence.

In performance, it could as well fold back on itself and fall from its own octave.

The bass could climb to the next root, but in that case it would have to skip a tone to get there on the beat.

Here are some alternative right hand inversions. Take the opportunity to:

take one of three forms: 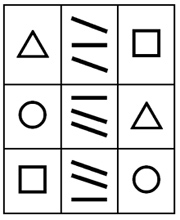 Knowing these plagal cadence patterns and seeing them in the keyboard will be invaluable in all your keyboard chord work.

So what mode is it?

This progression is Aeolian – most of the chords of the regular major but never cadencing into I (‘One’ – the home major), always returning to A minor.

The analysis is as follows.

You should immediately spot the three major chords a fourth apart and think ‘Mixolydian!’. The only place on the keyboard (white keys only) where this can be found is F–C–G. You would orient from there, whether you know for a fact that the first three chords are F–C–G or not.

The construction is therefore Aeolian. This is more obvious when you have the music (or MIDI) and the actual performance is white-keys-only, but you should be able to work it out anyway!

Here is the chord sequence with the Aeolian RNS and inversion symbols. Play the sequence from the chart.

Challenge yourself to get the very essence of this chord sequence by playing it in B Aeolian minor (key signature D major, Fí and Cí).

Your chord chart is now this.

Here are the audio/MIDI samples of 01 through 08 above in Aeolian B minor.

Make a copy of either of these tables (original key and B Aeolian).

The inversion symbols have been removed. Find your own strings of right hand chord sequence triads and put the circle/square/triangle symbols in. Vary the bass line as you go, using the two patterns outlined earlier.

Here’s the symbol key again to help you.

That’s it for this members-only Modes Zone page. Watch your mailbox for Modes Zone newsletter bulletins with round-ups of new Musicarta Modes material.