Spanish music uses a familiar variant of the four-chord Aeolian set. Here is a sample - this module’s performance, ‘Spanish Sketches’.

You may remember at the start of our Aeolian explorations, we said that ‘v’ (‘five minor’) doesn’t make a very good cadence with ‘i’ (‘one minor’). ‘V’ (‘five major’) is a much better cadencing chord.

Listen to this audio example. You will hear i, v, i (E minor, B minor, E minor) followed by i, V, i (E minor, B major, E minor), in the three pairs of closest inversions. See if you can play the chord changes just from the audio.

The typically Spanish chord sequence explored in this module takes the best of both worlds. It uses both the Aeolian ëVII chord and the major dominant, ‘V’, which would not normally occur together in either conventional minor keys or modes proper. 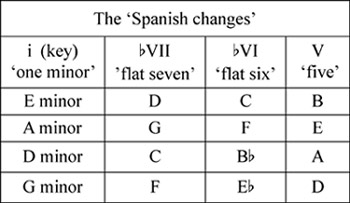 The Spanish changes in E minor

We are going to explore this chord sequence in E minor. Our familiar white-key A Aeolian minor goes too low for this music. (Note that this is a powerful reason for using the Roman numeral system to help you transpose – some music just sounds better higher up or lower down.)

See the Spanish changes chords on the familiar keyboards, below. Run through the inversions.

The new B chord is quite challenging. It’s mainly on the black notes, which means that your hand needs to be well up the keys to play it. This can feel sometimes feel wrong at first, but in fact it’s a good habit to cultivate because it puts the black keys within easy reach. 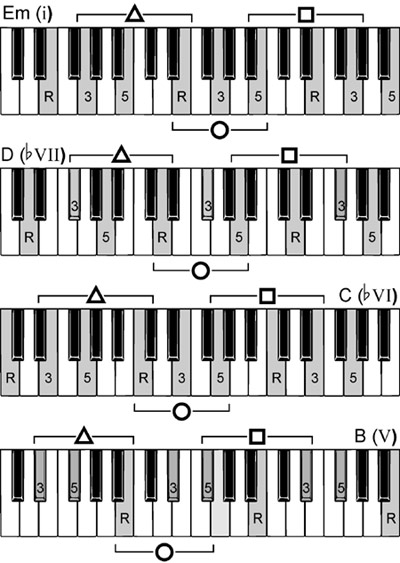 Check your knowledge of the B major inversions using the Musicarta Inversions drill.

In Spanish Sketches (the module performance), there are usually four significant chord tones in use. These get divided up between the two hands in various ways.

The following table shows the chord tones used and the way the are split up between the left (L) and right (R) hands.

Rehearse the main i–ëVII–ëVI–V chord sequence with the chord tones divided up as shown in the music and the table. 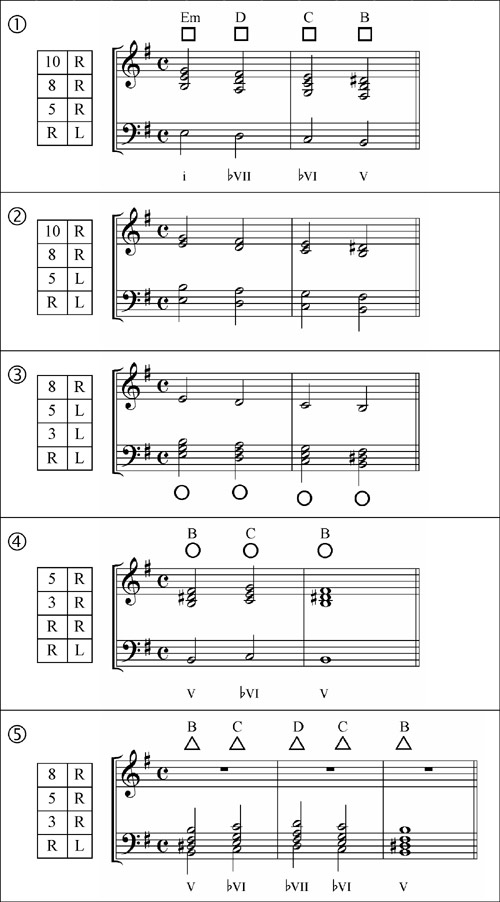 It’s important to be able to play the same chord tones in several different ways. It teaches you what the chord tones really are, independent of which hand or finger plays them. Your time on the above exercise will be well spent.

Building up the Spanish Sketches performance

This module’s performance consists of segments you can play and join together in any number of different ways.

First division of the chord tones

(Note: The audio clip goes on to play the next development. You could use the opportunity to ‘play it by ear’.)

In this rhythm, introduce the main melody in the left hand. 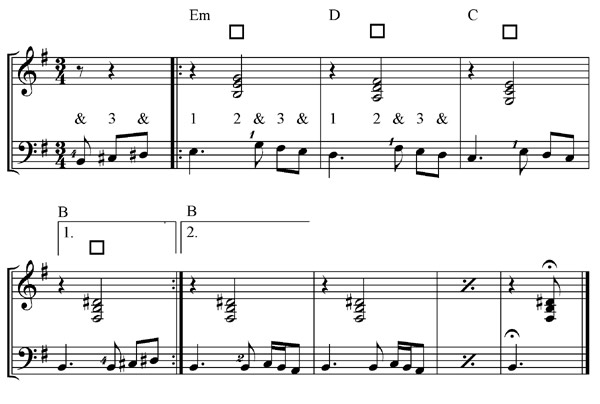 The melody starts half way through a bar. Count yourself in: “(One,  two) and three and…” .

The slash-and-dot symbol in the MS means ‘play one bar exactly like the previous bar’. It’s good to read musical shorthand like this – it gets you away from relying on ‘the dots’ (written-out music).

Next, we develop the rhythm, playing chords in the off-beat quaver ‘slots’. The ‘off-beat slots’ are the non-number ‘and’ (&) slots. Here’s a simple riff to practice playing on the off beat in the right hand.

(This pattern reverst to the fisrt division of the chord tones.)

Make a note of the rhythm and tap it on your desktop.

Now use that right hand  with the original left hand melody. An introduction is included to build up some momentum. 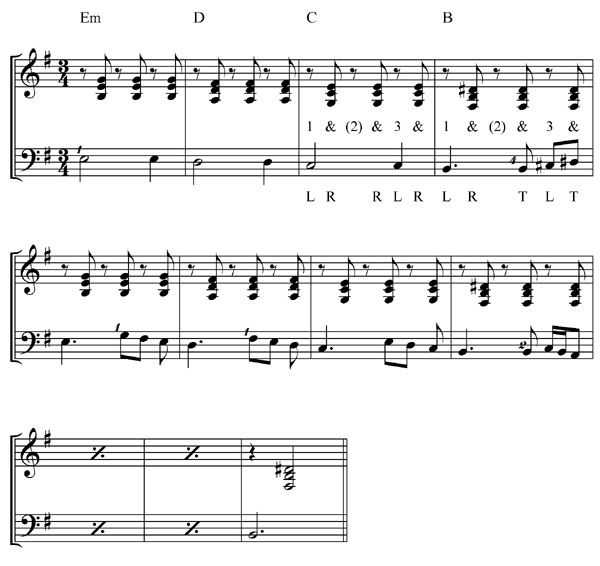 Here’s a tapping exercise for the two patterns involved.

This music is in exactly this rhythm:

Now 'waggle' the right hand (top two notes/bottom note) and play the MS example above (sup_spa_08) like this:

Second division of the chord tones

Our next theme uses the second division of the chord tones from the main table – two in the right hand, two in the left. Prepare the segment, then play the following music from the MS and/or the audio clip.

You can hear how the segments you’ve learnt so far can be ‘stitched together’ in the Spanish Sketches audio at the start of the module.

Off-beat quavers in the left hand

Third division of the chord tones

Playing off-beat quaver chords in the left hand as well as the bass notes is quite a trick to master. Here is a build-up to the full pattern, with audio clips at a comfortable practice speed.

1. The tune is in the right hand. The left hand plays a root position chord (circle symbol) on beat 2.

2. The left hand chord splits into the bass note and the other two chord tones.

4. Then divide the left hand chord into bass note and chord tones as before. The left hand may need quite a lot of solo practice.

If you don’t get the full pattern first time round, use one of the build-up versions in your performance for the time being – but keep pushing yourself. Don’t get so hypnotised by the written-out notes that you can’t use the counting and TLR analysis – they really are the only way forward for a lot of learners.

Here is an audio/MIDI file for the whole of this part rhythmic build-up.

Your chord work will sound a lot more interesting if you ‘riffle’ the chords, as if you were strumming a guitar. You can hear this effect on some of the right hand chords in the audio clip.

Here’s another ‘typical’ segment which is divided three right, one left.

This pattern uses the last ‘division of the chord tones’ in the table, with first inversions (triangle symbol) in the right hand and just the root in the left.

It’s even in a different meter, but it fits in quite naturally. A possible continuation is shown. (This would also be a good place to go into your improvisation.) The fermata sign tells you you can wait as long as you like before going on – a good idea when you are changing meter (time signature) again.

At some stage, you are going to want to try improvising a melody, and the B and C major chords are a good place to do this. The sample audio which follows has a lazy three-four rhythm, but you can drop the rhythm all together if you like. Aim for chord tones on the main beat in the right hand over a free left hand.

(Both the harmony and rhythm of flamenco music are very complex, as you’ll soon discover. Spanish Sketches is a simplified version, to help you get carried away by the music.)

The improvised melody section of the module audio is towards the middle of the clip. It’s the only part which doesn’t have written-out music.

Creating your own performance

The Spanish Sketches performance segments you have learnt in this module can easily be varied and put together in a different order to make a performance all your own.

Remember that, in this module particularly, you are not just looking for ways to be good, or right, but for ways to enjoy your own playing. The chord changes in the Spanish Sketches are very evocative and offer a good opportunity to play yourself into a deep enjoyment of your own abilities.