The Modes as Scales

As scales, modes have a different order of whole tone and semi-tone steps to those found in our regular modern major scale, which makes them sound different and interesting.

Actually, it is more true to say that the modes are made from the modern major scale tones, in their proper order, but starting and finishing on a different note. Modal scales are the major scale we know, but with another note as the tonic (home note).

Here is a table of all seven modes showing the piano keys that produce them, and a keyboard diagram showing the same information. 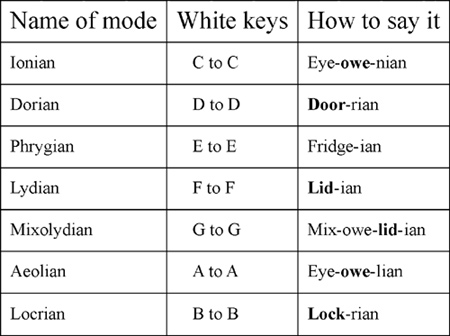 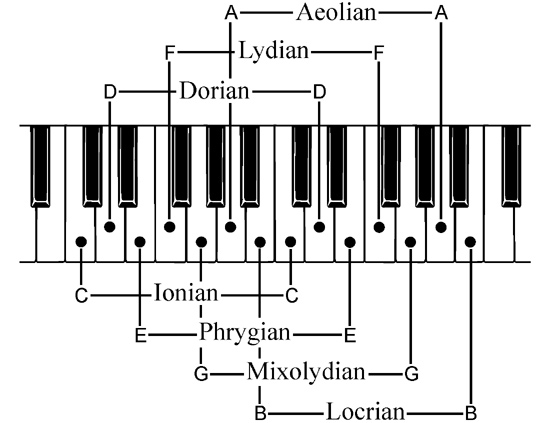 The modes as steps

The important thing about any scale (including the modes) is the pattern of whole tone and semi-tone steps between the scale degrees (the notes of the scale).

Where there is a black key between them (at the back of the keyboard), the notes they produce are a whole tone apart.

Where there is no black key between them – between B and C, and E and F – the notes they produce are only a semi-tone apart.

Here is the previous diagram showing the whole tone (W) and semi-tone (S) steps between the next-door white keys. 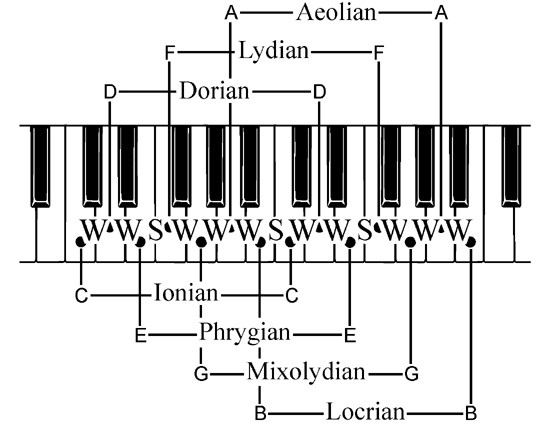 Here are the seven white-key modes in music manuscript with the letters W (for whole tone) and S (for semi-tone) between the notes. Essentially, the modes are these gaps between the tones. 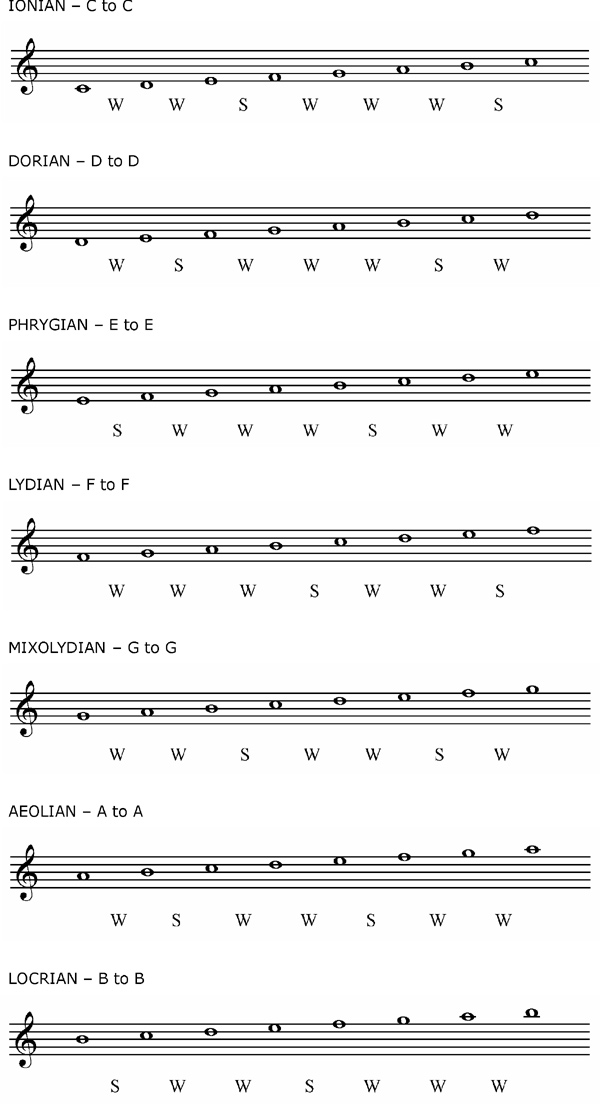 Without the music, the whole-tone/semi-tone patterns of the modes are as follows. 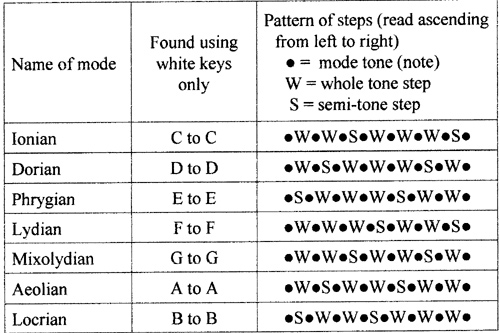 You can read off these whole tone/semi-tone distances on the marked-up keyboard diagrams above.

If you play these seven modes one after another using only the white piano keys, our modern musical ear hears someone playing a scale of C major starting on different notes (which in fact is exactly what is happening).

You can do this using the table above, providing you know how to form whole tone and semi-tone steps on your instrument. Here are the seven modes built on C, in manuscript.

Notice that you now have to state the name of the tonic (home note): C Ionian, C Dorian, C Phrygian, etc. 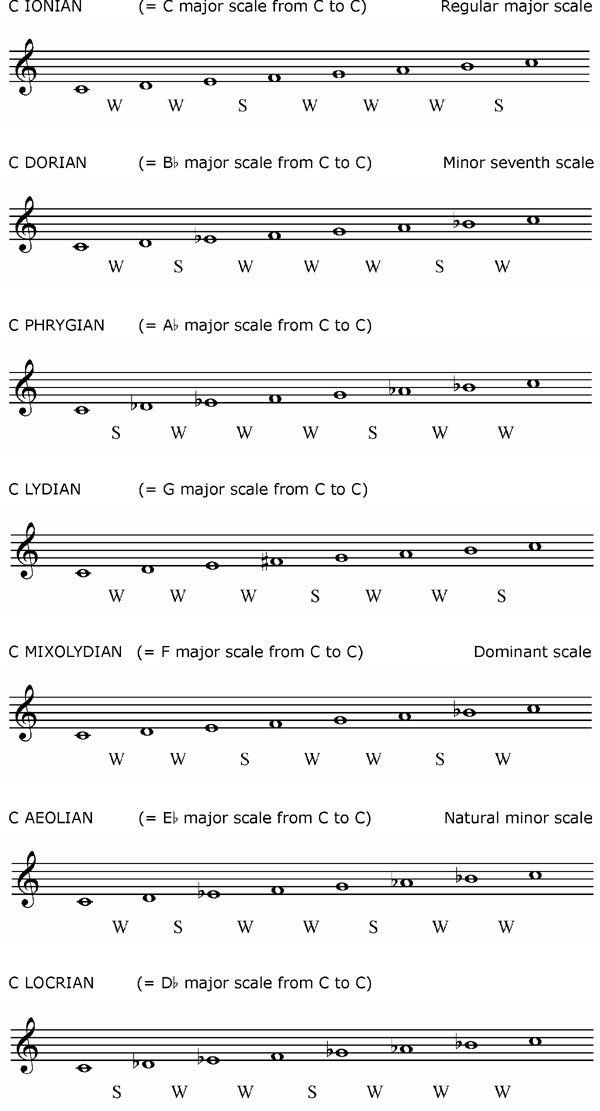 Notice in the table above the references like (= F major scale from C to C). You can use key signatures in this way to tell you which of the semi-tones in the octave to use to create your chosen mode.

Likewise, if the scale tones of C major – the white piano keys – from F to F give the Lydian mode (and C is a fifth above F), then the Lydian mode on A will use the key signature of E major.

Here is a table which shows this information – for the white keys only. 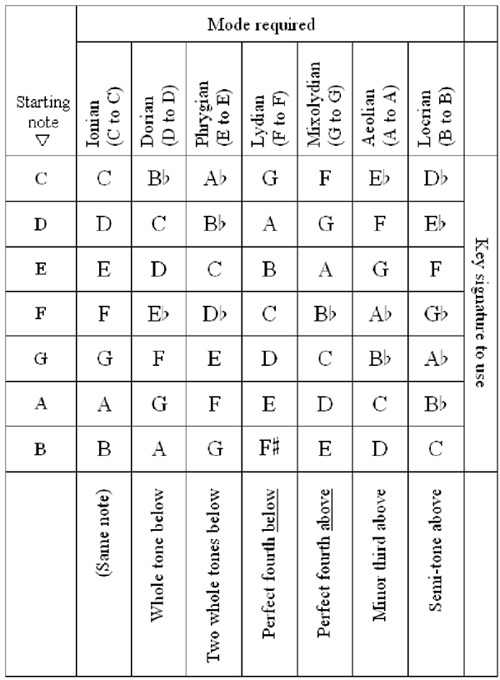 Here are the key signatures required. 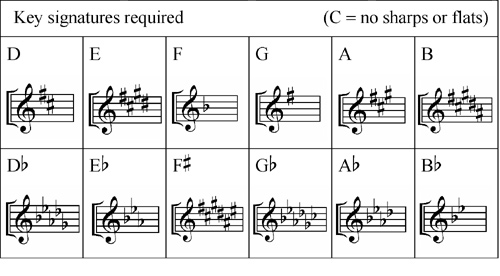 Here are the examples written out for C. Note that the accidentals are still placed in the music itself (in brackets) to show which notes the key signature affects. This would not normally be done. 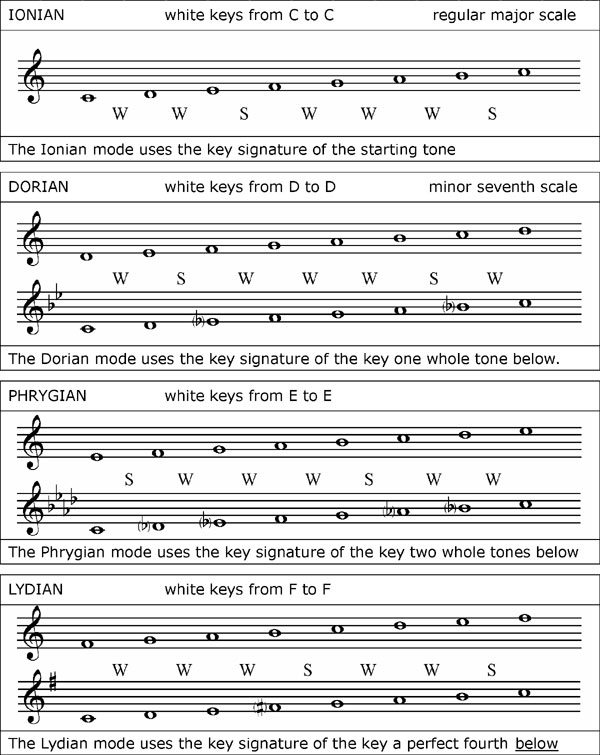 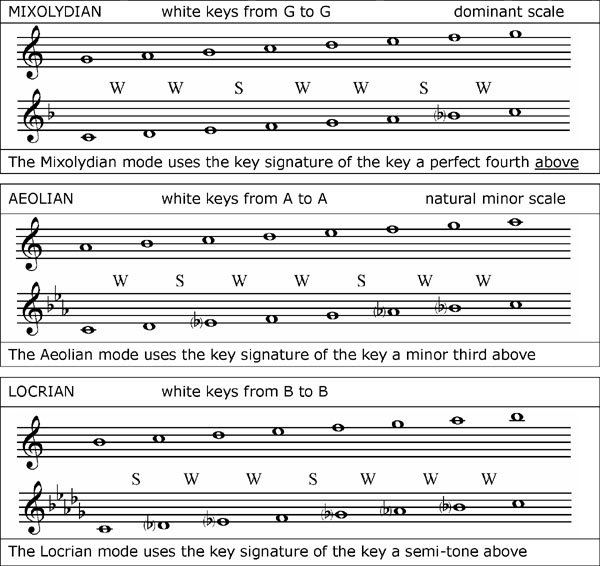 How the modes differ from the major scale

Another helpful perspective is to consider how the modes differ from the modern major scale. You have to know your major scales, of course, and remember that in the major scale, the semi-tone steps are between the third and fourth, and seventh and eighth (octave) scale degrees.

Building all seven modes on every possible starting note using the whole tone/semi-tone step patterns, is not necessary.

The reason is that, for all practical purposes, only three modes (apart from the Ionian/major) survive – the Mixolydian, Dorian and Aeolian. The other modes are too close to the modern major scale to remain distinct.

You should however be able to build these three modes, not only to use as improvising scales, but in order to find the useful families of chords we explore in the workbook modules.

There is already a table in this module showing all the modes built on C and a table of their whole and semi-tone steps. If you know how to form whole tone and semitone steps reliably on your instrument, you can use this table to play the modes starting on any note.

So, using all the resources given so far, create the following modal scales on the given tonics (home/starting notes).

First set  Only one black key (per scale) needed.