NOTE: Some computer systems do not represent sharp and flat signs as entered by the author. ë indicates a flat sign and ì a sharp.

In this module, we add chord ‘v’ (“Five minor”) to our A Aeolian mode i-ëVII-ëVI (“One minor, Flat Seven, Flat Six”) set. In A Aeolian the new chord is E minor.

This module’s riffs settle the new chord in by rehearsing One minor-Five minor (i-v) chord changes in our familiar A Aeolian minor. It comes in three progressive versions, so you’ll be sure to take away something from the module.

Here are the expanded set of A Aeolian chords shown on keyboards. The new chord (E minor) is at the bottom. 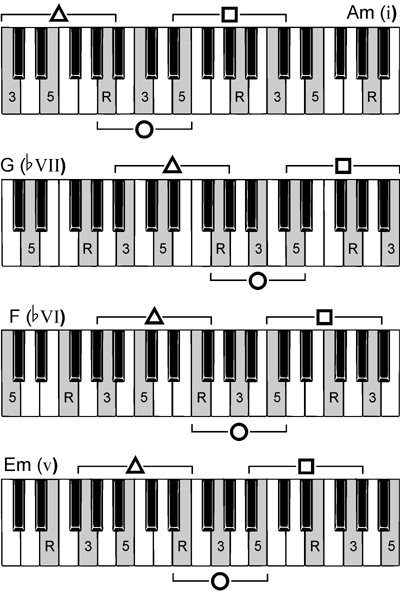 Look carefully at the new E minor chord tones. There is only one key different to the ëVII G major chord – the note D in the G chord moves one step to note E in the E minor chord. 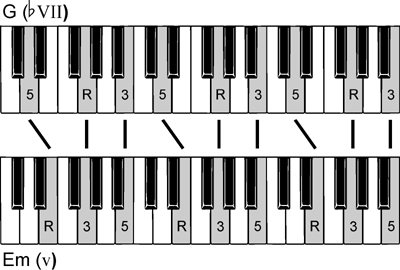 This means that you can use the new E minor chord to harmonise two notes (B and G) where you used the G chord before.

Use E minor chords where possible in the following chord sequence.

Find the inversions of the chords indicated which have the notes shown at the top. The circle/square/triangle symbols should help you. Refer to the Musicarta Keyboard Chord Generator or the labelled keyboard graphics in this workbook for help finding particular inversions.

Play six-eight TMB (top, middle , bottom) broken chord patterns all the way through with a simple one-note root in the bass and you will have something like this.

This is a very basic exercise which you will find easy to improve on.

As in previous modules, we are going to use next-door notes to make the melody more interesting

!!  IMPORTANT NOTE  !! Simply look at the following examples. Save your energy and DO NOT play them, unless it’s really easy for you!

The arrows indicate whether you move up (to the next white key up) or down.

We are going to do the same in this module. Our rhythm is six eight - the same as the first example above. Here is a sketch of what we want. Listen to the audio while you look at the music until you can hear the up/down melodic profile.

You will notice a new arrow symbol which points straight to the side and means ‘repeat the same note’.

Here’s the written-out music for that clip. Make a good effort at putting the performance together from the instructions before you fall back on it. 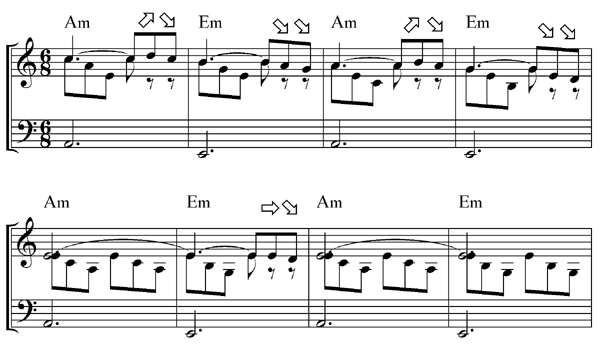 This is what you hear in the audio clips above. The stems-up notes are the melody; the stems down notes are the TMB broken chord pattern

Next, make a left-hand accompaniment pattern and leave just the melody in the right hand.

In Modes Part Seven, we made a left hand accompaniment pattern in E minor out of a simple triad. 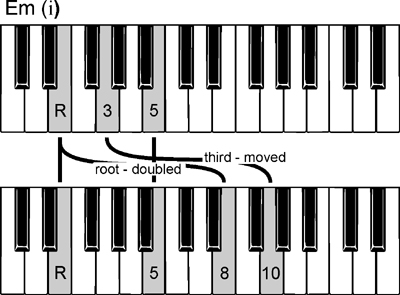 We ‘doubled the root’ to add another note at the octave, and shifted the third up an octave, making it ‘the tenth’.

Do the same with an A minor triad. Start in the octave below middle C so our accompaniment pattern ends up in the right place. 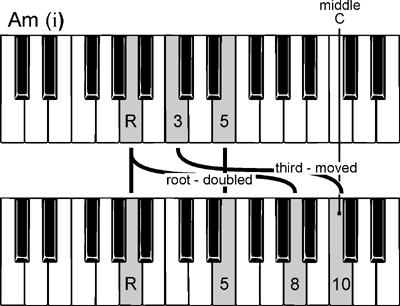 The written-out music for the six-eight pattern in the audio clip is as follows.

The same accompaniment pattern in E minor is too low for this piece, so we use a different pattern for the E minor bars. You just add another root, an octave below, to a simple E minor triad. 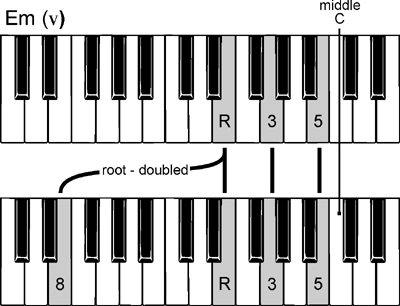 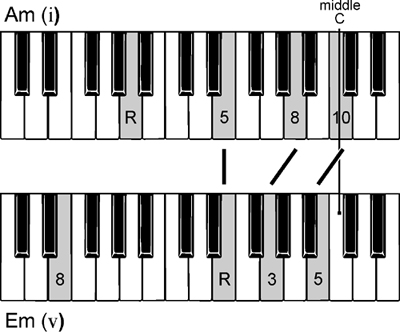 You see the voice movement diagram (between the keyboards) showing how the A minor triad changes into the E minor triad and back. The top two notes change, the bottom one stays the same.

Here is the music for the alternating i-and-v chord accompaniment pattern we use for the module riff.

Note: Easier accompaniment patterns are given further on, so you will be able to play the module riff even if you can’t manage this pattern.

In left hand accompaniment patterns, you often have to move your hand quite quickly far beyond what it can stretch. In this case, the leap is from finger 2 on E, down an octave to finger 5 on the next E down (circled in the MS above).

Practice ‘throwing’ your hand that octave distance – from finger 2 to finger 5. The octave leap is always the same size and ‘practice makes perfect’. The music might be popular style, but technique is technique, and if you want it, you have to work for it!

Here are some exercises to help you.

Practise a little every day. Try it with your eyes closed – you don’t see the pop pros staring at their hands! Listen carefully and learn from your mistakes. It’s like casting a fishing line. If you jump too far, reel it back in; if not far enough, pay out some more line.

Playing from a lead sheet

Now that you have accompaniment patterns in six-eight for chords A minor and E minor, you can play from a ‘lead sheet’ version of our riff, which shows only the melody and chord symbols.

Here is the lead sheet music, showing only the main chord tones.

For each chord symbol, you play one accompaniment pattern. Listen to the audio file and copy the performance. Play as slowly as you like to start with.

Now play the developed melody in the right hand over the new left hand accompaniment pattern,

You will hear that the audio track has a four-bar Am-Em intro.

The cross-head notes in the MS are ‘any note’ notes – the ones you have to find by going up or down. THEY ARE NOT NECESSARILY WRITTEN IN THE RIGHT PLACE.

Try to find the melody notes using the shorthand sketch before you look at the following written-out music.

If you want, you can practice the improved melody over a simplified left hand accompaniment pattern. (Use this pattern anyway if you find the big one too difficult.) 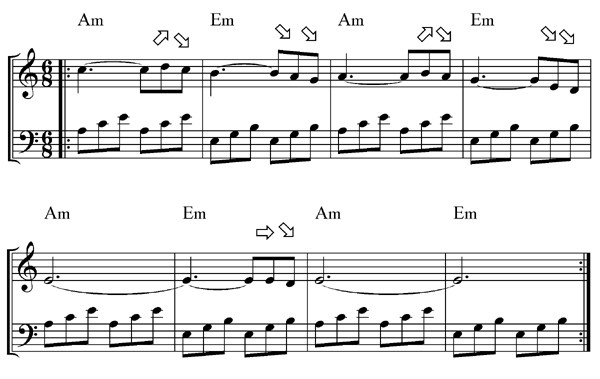 You see what the simplified left hand accompaniment pattern is – root position triads broken up bottom, middle, top (BMT) over and over.

Now try to play the following melody line from the sketch and the audio file alone. Use the simplified left hand (as written) if you wish, or substitute the full left hand pattern, as in the audio clip. The main (‘target’) notes are given. 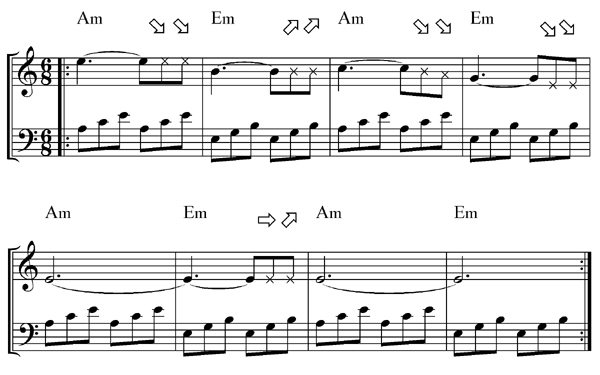 Using the same rhythm, it easy to ‘wander about’ the keyboard heading for chord tone target notes. Try to re-create the following audio example from this sketch.

You will notice that this melody line requires another symbol – the flat arrow, meaning ‘repeat the same note’.

You don’t have to stray so high if you don’t want to. Here’s a one-octave version to practice on.

(The MIDI file demos both types of left hand accompaniment.) Here is a version of the same melody which strays just a bit above and below the octave mark.

Here’s another clip that just wanders between target A minor/E minor chord tones using the same two-moving-notes pattern. See if you can pick it up just from the audio clip.

Let yourself go and see if you can wander between A minor and E minor target using the pattern we’ve been practising – six-eight broken chord texture and two moving motes at the end of the bar.