This module starts our look at the minor modes. Here's the riff you build up to in this module.

The i–ëVII (One, Flat Seven) pair

In both minor modes (Aeolian and Dorian) the all-important ‘five’ chord (the dominant) is minor, and this is considered weak as a cadencing chord. The major ëVII chord, which is available in both modal minors, often acts as a substitute.

Both the Aeolian and Dorian modes have this fruitful i-¨VII chord combination (highlighted in the table below) – the minor tonic (home chord) with a major chord a whole tone below.

Just as I and V in regular major keys (and i and V in the minor) can support lots of music on their own, so i and ¨VII in minor modes are a vital and fruitful pair of chords.

Listen to the module riff again.

The riff uses the two pairs of i-ëVII chords that you can find using only white piano keys – A minor and G, and D minor and C.

Find the inversions of the A minor and G chords from the keyboard diagrams below..

At some point, you will want to study the tables you see one these pages. They may look very academic, but they contain a wealth of useful musical information.

The table tells you that six notes in the octave (the six top notes of the three inversions of the two chords) can be harmonised these two chords. In the tables, the ‘top notes’ are counted from the root of the A minor (home/tonic) chord. 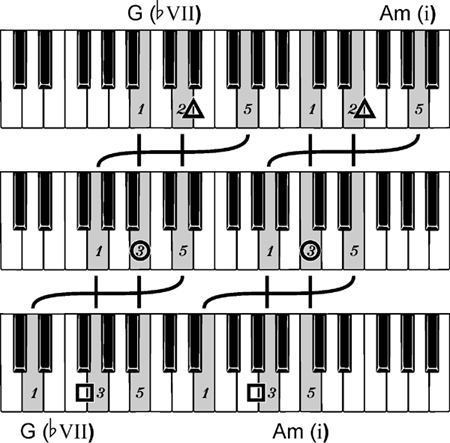 Key to the symbols

The inversions you see in the illustration could be played anywhere on the keyboard. The G chords you will play will be only one key below (to the left of) the A minor chords of the same inversion.

The chords in pairs

Find the descending string of eight alternating A minor and G chords. Use the triangle, circle and square symbols to help (even if you do read music). The pairs of A minor/G chords are the same shape, only one key apart.

The chords are written an octave higher than played, to save a lot of leger lines. To start building the riff, play the chords descending, an octave lower than written (8vb – start with the right thumb on middle C).

The riff has a ‘pedal bass’ – the note A repeated between the right hand chords regardless of what chord is being played above it.

The riff also has a jazzy beat – the music doesn’t show this. You can try to imitate it or just practice the chords straight, for now.

The D minor and C chords 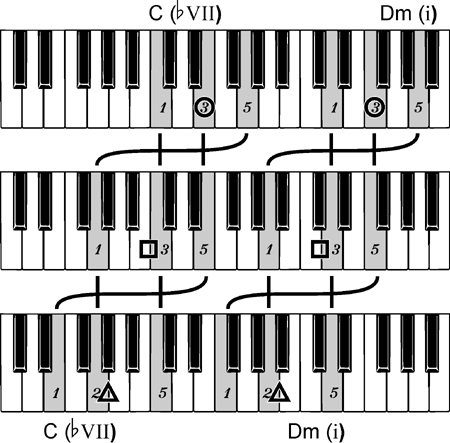 Practise flipping through the inversions of D minor and C in the same way as before. Browse the table which follows to increase your stock of ‘really useful theory’.

The D minor/C part of the riff comes half way through. The music is a bit simplified – it doesn’t show the jazzy beat..

Listen to the module riff again, paying attention to its ‘shape’.

(An ‘outro’ is the opposite of an introduction!)

Basically, we have one ‘thing’ (the A minor/G chords) twice, another thing (the D minor/C chords) once, then the first ‘thing’ again. (The outro is just tacked on.)

If we call the first thing ‘A’ and the second thing ‘B’, we have what’s called ‘AABA form’ – two ‘A strains’ (sections), one ‘B strain’ then another ‘A strain’. You’ll find AABA form a lot in music, especially in jazz standard songs. Listen out for it!

Your main aim is to practice efficiently so you achieve you goal as quickly as possible.

The main purpose of a riff like this is either to back a solo, or just to get into the groove and enjoy your own playing. Note that it’s fine to play the whole riff slower than the demo audio tracks.

You can build up whole riffs, swapping between just two chords: Here are two ‘play by ear’ examples to copy. Use the MIDI clips to see exactly what is going on.