NOTE: Some computer systems do not represent sharps and flats as entered by the author. ë indicates a flat sign and   a sharp.

Module Nine of the Musicarta Modes workbook rehearses the four chords in the Aeolian minor mode we have now built up.

The riffs in this module are in a more rocky four-four idiom. The second example is a backing groove for improvising over, and introduces and explains ‘slash bass’ chords – chords with a note other than the root in the bass/left hand. This simple technique gives your riffs a sophisticated sound with no additional effort or theory background.

Here are the audio clips.

To start with, you will be using all four chord in the existing A Aeolian set, as shown in the top line of the table.

The other three sets of chords are shown to help you transpose our module chord sequences into other keys. When you transpose, you really get to think about how music is put together.

The chords marked with an asterisk – E flat and B minor – have not been shown on keyboards in this series yet. Use the Musicarta Keyboard Chord Generatora> to find them if you need help.

Don’t forget to look at the Roman numerals in the table and in the music from time to time. If you think about chords in Roman numerals, you learn not just one chord sequence but many, and put your hands on the levers of a powerful music-making machine. Just look and think now and then – the system will sink in over time..

Here are the A Aeolian chords we will be working with, shown on keyboards: 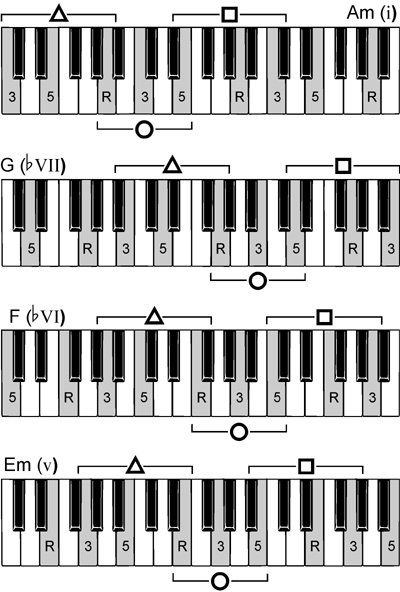 Here are the top notes of the first riff chords. Use the inversion symbols (circle, square, triangle) to help you find them.

The riff is in A Aeolian – an all-white-key mode, so you can use simple play one, miss one (P, M) key counting to find the chords:

Notice how the top notes of the second half of the riff are the same as in the first half – but the chords are different. This is called ‘re-harmonising’. It makes the music sound more interesting.

If you read music but can’t find the chords using the circle/square/triangle symbols, the chords are written out at the end of the module, but you will learn a lot more in the long run from using the shorthand, combined with the following audio file, to find the notes.

Here is the audio of the simple chords, with the roots in the left hand as bass notes.

Play along to practice the inversions.

Riff One with broken chords 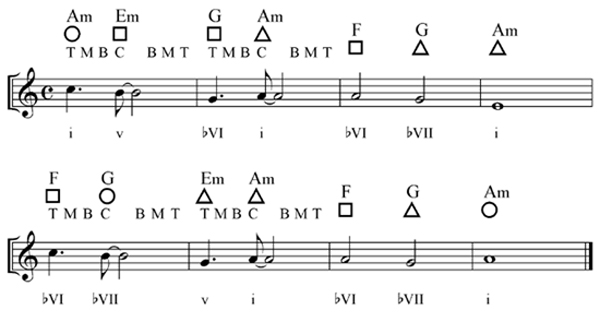 Remember, C stands for ‘chord’, meaning play all the notes of the chord at once.

Errata The last (Am) inversion symbol on each line is wrong – they should be switched.

Rehearse the rhythm of the last two bars in each half by tapping out this beat map.

The first of these tapping audio files is at practice speed; the second is a tempo.

Listen to the riff audio clip again and tap along with the last two bars in each half.

Here is an exercise for the last bar in each half, where the right hand splits into ‘lead’ and ‘rhythm’ sections. The right-hand side of the hand (finger 5) plays and holds the melody note while right hand fingers 1 and 3 (the cross-head notes in the beat map) keep chopping out the chords.

Here is the Riff One audio again, to check your version of the last two bars against. (It doesn’t matter if it’s ‘not quite there yet’, as long as you’re playing the chords in some recognisable rhythm.)

A slash bass chord is a chord with a note other than the root (name-note) in the bass – meaning, for keyboard players, in the left hand. Slash chords often result from the bass line being ‘smoothed out’. Slash chords make music sound more sophisticated – for no extra effort – and multiply the variety of sounds you can get out of any one chord sequence.

Here, the A minor/E minor/F chord sequence (i/v/bVI) is explored in three places – starting on each of the three inversions of the A minor chord. Listen to the difference between these two versions of the same chord changes: 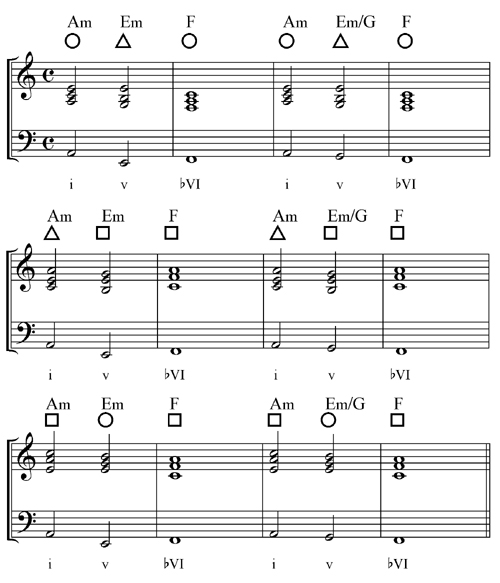 In the first version (the first two bars of each line), the bass is the root (name-note). It has to leap beyond the F then step back to arrive at the F chord bass note – a zigzag line.

In the second version, (the last two bars of each line), the bass moves smoothly by steps. It can do this because the bass note G is an E minor chord tone. The smooth bass line creates the slash chord, Em/G – “E minor over G”, or “E minor with G in the bass”.

These chords make a good backing groove for soloing over. The three positions – starting on higher and higher inversions of A minor – provide a good device for building intensity.

Here’s the music and an audio performance of a slash-bass backing groove on i, v, ëIV. 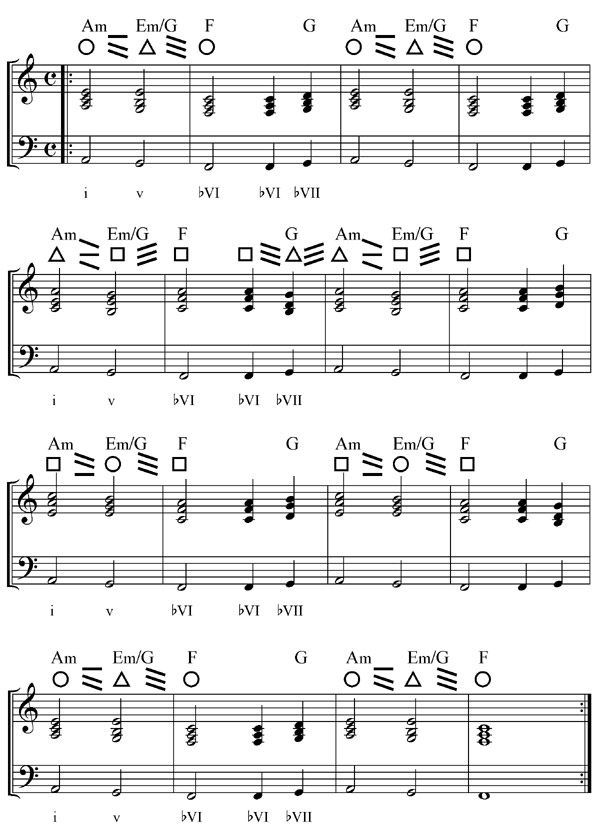 When you are moving as many different inversions as this around, it is essential that you analyze voice movement – which notes in the chord move, and how. If you study the voice movement diagrams conscientiously, your chord work will improve dramatically.

The rhythm is quite complex, and varies. Here is a simplified pattern written out, with a practice-speed audio clip.

Here is the actual Riff Two performance again, for convenience.

Here are the written out chords for the first module riff. 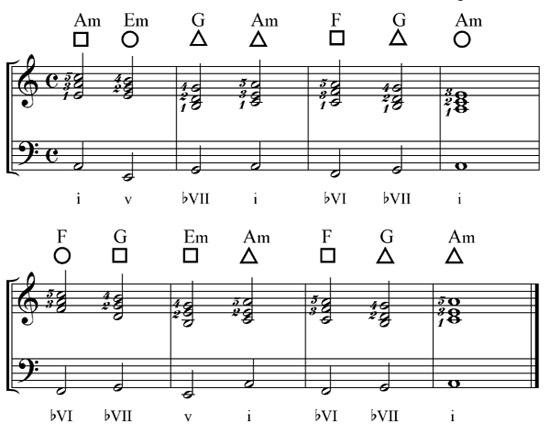 Here is the module riff written out in full. 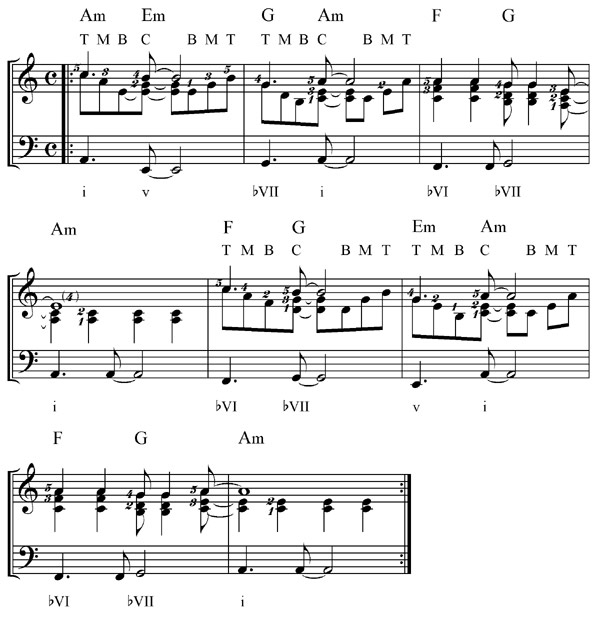