This module adds iv (‘Four minor’) to the current Aeolian set – D minor in our A Aeolian key.

Get to know the module riff.

Here is the first part of the module riff, discussed below

The D minor chord only appears in second inversion in this riff (square inversion symbol). Here is a recap of how you find any second inversion chord from its root position mother chord. (Read through even if you already know, for revision.)

Look at how the D minor right hand chord is written in the module riff MS. (These are the four chords you hear repeated at the start of the riff.) 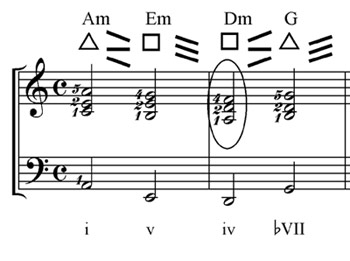 Work through all the opportunities presented to practice inverting triads. ‘Seeing’ the next inversion up or down of a chord makes playing interesting music much easier. 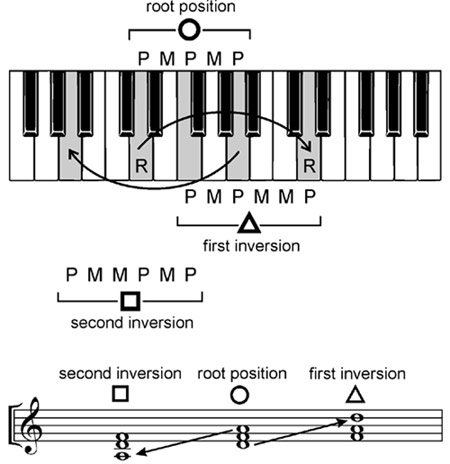 Here are the skeleton chords for this module’s riff. 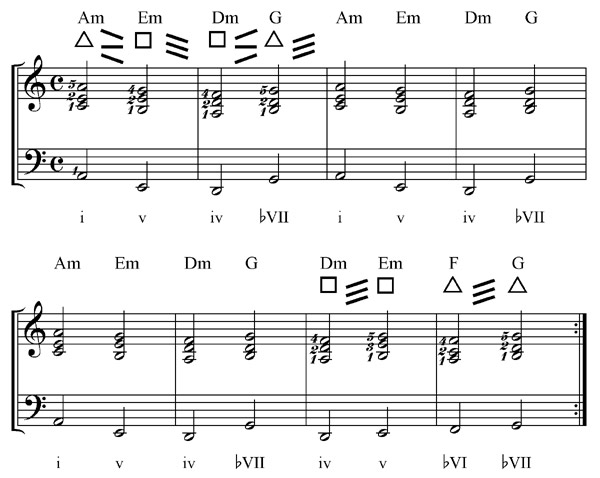 Use the voice movement diagrams to help you learn the chords. Voice movement diagrams simply show on paper what the proficient pop musicians is thinking: “The middle note stays the same, the two outside notes drop down….  everything goes down, perfectly parallel … “, etc. You should be thinking that way too.

Now we add some rhythm. Here is the pattern of the first six bars.

This is the rhythm for the first six (3 x 2) bars. The D minor and G chords are dragged forward (anticipated). The BMT refers to the bottom, middle, top of the G chord.

If you have found your chords correctly, you should be able to play along with the audio for the six bars – perhaps a little  more slowly.

Here’s the audio again, for convenience.

The  last pair of bars has more syncopation:

Listen to this repeating audio/MIDI as you look at the beat map above. Work at it until you see what right hand notes to fill the pattern with and play the section.

That completes the first chorus of the module audio. In the second chorus, the bass part  drops the plain minim rhythm and picks up the beat. The rhythms are all familiar from earlier modules in the series./ Listen to the audio carefully, tap along, then ‘tap’ the chords and broken-chord chord tones at the keyboard in the rhythmic patterns you’ve identified. Expect to put in some hours getting a performance like this together!

This realisation uses two left hand accompaniment patterns. We used them before, in Module Nine. Recall how the two patterns are made out of the three chord tones of the root position triad.

We use two different patterns because the R 5 8 10 pattern down in E minor/D minor sounds too low.

In addition to the two patterns shown, we also need, for the accompaniment,

Find these accompaniment patterns. Here is a left-hand-only practice section to guide your practicing.

Here is the MS for this slow variation. Study it as you listen to the audio again to see how it matches up. Read the notes about the patterns written on the MS. They are all useful things to know about this piece, and creative ways to think about playing popular music. 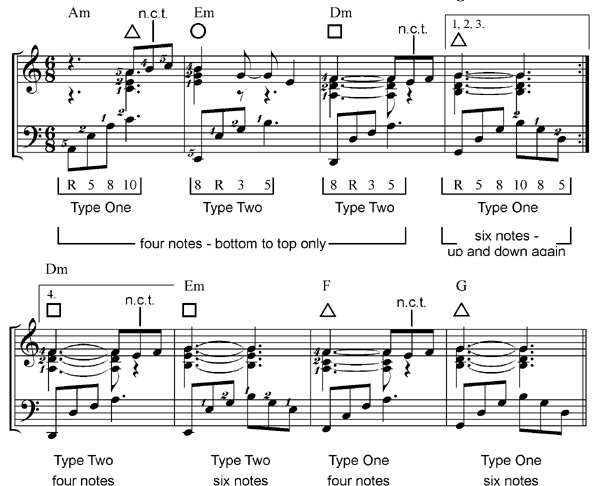 As usual, the melody is made up of chord tones on the beat with smoothing-out non-chord tones in between.

The full module riff puts together the two sections you have learnt and finishes off by revisiting the faster first section material. Listen to the final section on its own (below) and build your performance from the audio clip and the following notes.

The ‘reprise’ (this final section) starts with both hands playing in the syncopated rhythm of the top line of the first beat map, with the left hand playing its chords an octave higher to keep the sound quite small.

Then the left hand drops and you play a fully syncopated chorus, and to signal that the ending is approaching, you repeat the last four chords (D minor, E minor, F and G) twice, finishing with some strong A minor chords

Train yourself to listen out for the structural features of songs and instrumental pop pieces like these. Knowing a piece’s structure makes it easier to play – and remember. Learning about song form makes it easier to write songs or compose – you’re not starting from scratch, you’re filling a ready-made pattern with your own material.