Looking at the Pyramids chord sequence, we can see two places where there are two bars on the same chord.

In these two places, instead of just playing the six basic music-making position (BMP) notes from bottom to top twice, we can use a more interesting twelve-note pattern called the ‘left-hand-over pattern’.

We are going to learn the left-hand-over pattern in our home chord of A minor. In the lesson performance, we showcase it in an added Introduction.

This is what two ordinary bars of A minor BMP notes look like in written-out music. 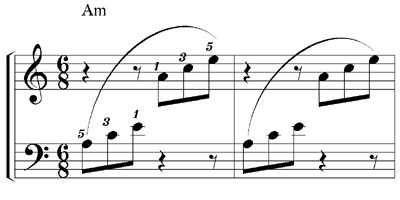 In the left-hand-over pattern (which lasts the same amount of time) the left hand passes over the right hand to play just one note, and then you play back down again.

Here’s an illustration showing how to find the left-hand-over note in A minor. 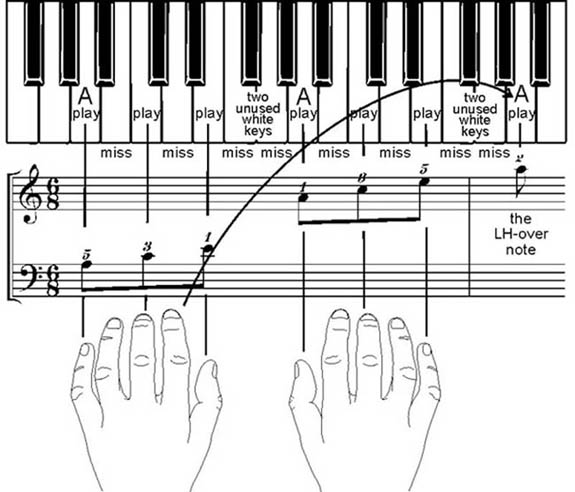 The left hand goes over the right hand to play the next ‘A’ going up the keyboard, then you play the notes back down again to fill up the bar.

In popular music, chords are our first priority. Along with the Basic Music-making Position, the LH-over pattern is one of the many useful chord shapes you will learn in the Pyramids Variations material...

We are going to play two LH-over patterns in A minor as an added-on Introduction to our improved Pyramids Variations performance.

Here is the Introduction written out, with instructions following:

Read this ‘walk-through’ to make sure you understand LH-over patterns.

Remember to leave two unused white keys on the way down when you’re looking for where to put your left hand thumb.

Practice the pattern over and over. Notice any difficulties you have. Try to work out what your difficulty is and if any of the instructions or illustrations here can help you with it.

The left-hand-over pattern in E major

For bars 7 and 8, we need a LH-over pattern in E major. It’s just the same ‘shape’ as the A-minor patterns above.

First play the six-note E major BMP pattern a few times to remind yourself of the notes to use. The middle finger of each hand (finger 3) plays the black key G sharp.

Here is a keyboard diagram showing the keys we use.

Here is what the LH-over pattern in E major looks like in written-out music.

Follow the same instructions as before to play the LH-over pattern in E major.

Use the performance files to help you practice the LH-over pattern in E.

To finish, we want an A minor ending in bars 15 and 16 that uses the LH-over pattern. But if we play a full LH-over pattern, the last note will be C, the middle left hand note.

This is not a satisfactory ending. Note ‘A’ is a better note to end on.

There are two possible A’s we could finish on in the A minor LH-over pattern. The first is the LH-over ‘A’ at the top of the pattern: 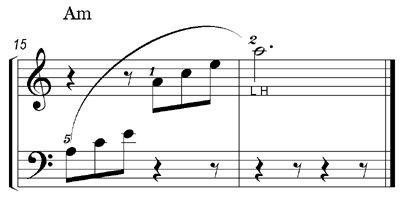 The other ‘A’ we could finish on is the RH thumb note, halfway back down the LH-over pattern: 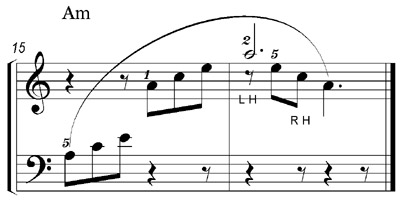 Try both of these endings. Neither of them is a full 12-note LH-over pattern.

The new Pyramids performance uses the LH-over pattern in A minor, played twice, as an introduction. Here is the new chord chart.

Here is the lesson performance again, with the parts subtitled.

Listen to the lesson performance audio and see if you can follow in the chord chart. (Give yourself a few goes if at first you don't succeed...)

Here is the performance MIDI file playing on MidiPiano with the Piano Roll pane activated.

Work through the performance walk-through video.

Here is the MidiPiano/scrolling music video with the sections named for you.

Try to play this new LH-over version from the chord chart only. Only three small parts are different to the Lesson One performance: the Introduction, the LH-over pattern in E and the LH-over ending in A minor.

Don't worry if  the music you're playing isn't exactly the same as in the audio clips. Use the combined Basic Music-making Position and left-hand-over patterns as a springboard to your own compositions. Remember that ‘getting lost is the music’ is part of the plan.

Now go on to Lesson Three.