This is a sampler page for the new Musicarta home study KEY CHORDS Volume One download, now available at just $14.95. For an overall introduction, click through to the Key Chords home page here.

This and the other sampler pages are here to give you an idea of how Key Chords will help you learn to play great riffs with just the four most used chords in popular music.

This page covers modules One through Three of the Key Chords workbook. You can click through to the other sample pages using the series navbar in the right hand column, and decide whether Musicarta Key Chords Volume 1 is the keyboard creativity course for you!

A great deal of satisfying music is made up of just three chords in a key.

Guitarists routinely learn these little families of chords – C, F and G, for example, or E, A and B – and are quickly playing songs and riffs with them. Musicarta Key Chords aims to make this as easy (and as much fun!) for the keyboard player.

The two little families of chords mentioned above – C, F and G and E, A and B – are alike in one very important way. The chords in each group are:

The piano keyboard provides a ready-made major scale - the white keys from C to C.

Of the seven different chords you can make, you find major chords on the first, fourth and fifth scales degrees (steps) – chords I, IV and V. These are the first three of the four ‘Key Chords’.

You can play music with the three chords of this simple type:

But, every triad comes in three inversions, with a different note at the top

…and moving from one chord to the closest inversion of the next chord makes better-sounding music:

SO…  Key Chords teaches you how to move between closest inversions of the three major chords (I, IV and V) – and eventually the fourth chord (vi – Six) too.

Key Chords breaks this task up into pairs, and the first pair is I and IV – C and F major chords in all-white-key C major.

The first pair: I and IV – C and F chords

Here are the chord tones of the C and F chords indicated on keboards and played ffor you.

Your first pair of closest inversions is this (you play the notes joined by the lines): 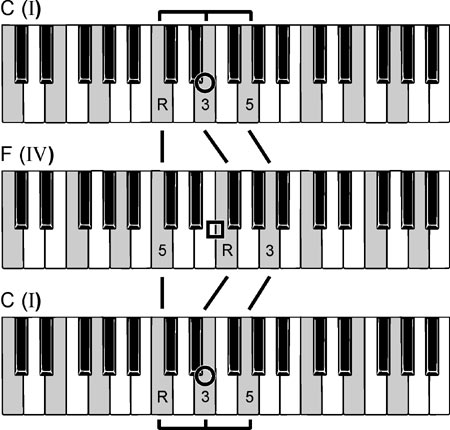 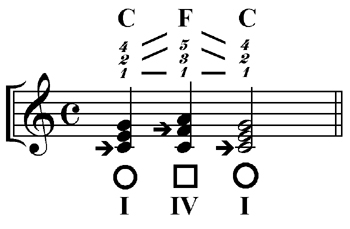 (NB: The following is just a sketch of the rest of the module - the Key Chords workbook doesn't dash through it like this!)

There are two other sets of closest inversions to find:

You now have the full set of three closest-inversion pairs:

Now all you need is a bit of foot-tapping syncopation, and you've got a working riff!

That concludes this first Key Chords demonstration lesson, which shows you how the home study download coaches you to real keyboard mastery of the chords you need to play popular music.

Stay posted - lots more to come in this revised series of web pages!