This is the second page of major pentatonic scale-tone practice patterns associated with the Musicarta Pentatonics Workbook.

Use the series navigation on the right to click through to other pages.

Pattern 7 is like Pattern 6 but keeps the up-down alternation going right through the (first) line, then the reverse, down-up, alternation. This would be a good pattern to cycle through the keys. Instead of ending, drop down a tone and play the pattern in C, then in F, then in B flat, and so on.

Pattern 8 is the major pentatonic scale played in rising triplets overlapping by one tone, then skipping up and stepping down across the beaming (rhythm).

Pattern 9 is zigzag pentatonic scale tones but with the third pair of four inverted (rising). On the way down, it’s the last of the four pairs of notes that’s inverted. The drill overall sounds better. You should always be listening for improvements, or simply for what you’d prefer to hear and play, and be ready to branch out of the patterns given.

The second rise-and-fall alternates ‘up’ pairs and ‘down’ pairs. 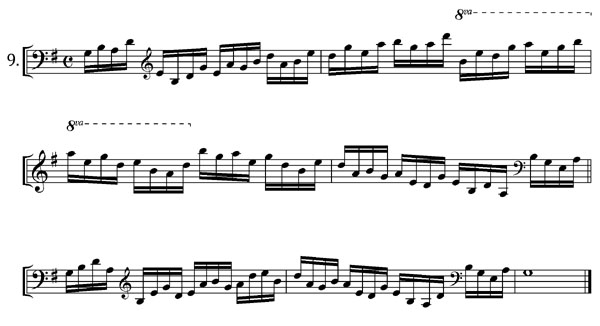 Pattern 10 plays around with ‘up’ and ‘down’ pairs but in six-eight. The first pattern in the drill is up-up-down pairs with the beamed groups only climbing one scale-tone at a time (and the reverse on the way down). The second pattern is the same but the groups only overlap by one scale-tone, so the pattern moves up and down a lot faster. The last pattern is the same but with up-down-up pairs. 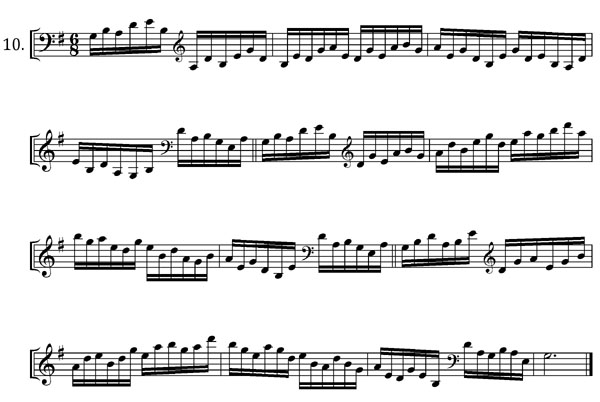 Because the pentatonic scale has only five notes, two of the steps in the scale are bigger than a whole tone, so they might look like skips at first.

Examining melodic movement like this, especially in the pentatonic scale, will train your brain and ears to pick up melodies better than almost anything else.

You can transpose the patterns by pure shape into the other all-white-key major pentatonic keys C and F.

After that, you should venture into the one-black-key keys, D and B flat, then the two-black-keys keys A and E flat, and so on.

Make a practice schedule to gradually work through the patterns in pentatonic keys at least up to three black keys (A flat and E majors).