Working with these symmetrical melodies will increase your ability to hear, visualise and find the pentatonic scale-tones.

By ‘symmetrical melody’, Musicarta means a melody where the music above the tonic is mirrored below the tonic.

Here are the basic movements. 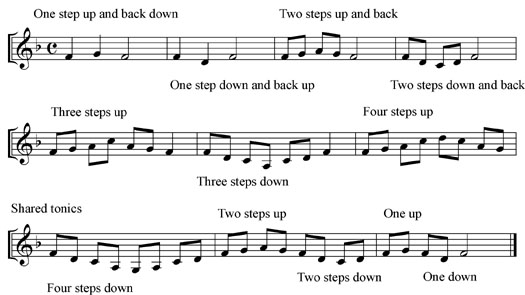 The download MIDI file number appears in the top left corner of the video box. The files for this module are numbered SPM_01 to SPM_11.

Using the up-down, step-skip analysis from Describing Scale Practice Patterns, we see that the portions below the tonic exactly mirrors the portions above it.

The three going-up-first sections (brackets above the stave) are:

The three going down-first-sections (brackets below the stave) are the exact opposite.

Remember that some next-door notes (steps) in the pentatonic scale would be considered skips in an ordinary scale.

The melody only goes two pentatonic scale-tone steps above and below the tonic.

Check that you see how the mark-up describes what the melody does. This makes the melody easier to think about and remember, and beds the pentatonic scale more firmly into your musical imagination.

The melody now goes three steps either side of the tonic, F (starting and finishing note).  The mirrored sections are indicated with brackets. The first two phrases have their own tonics at the start and finish. The last two phrases share a tonic in the middle.

The melody now goes four steps either side of the (shared) tonic, then three again, with a ‘Scottish lilt’ rhythm.

The next examples have (pentatonic) skips as well as steps.

This melody is the same as SPM_03 but with two notes swapped around, making a skip instead of a step.

The mark-up for the first two phrases would be:

Then comes the same material with a shared tonic in the middle.

Check you can find the ‘skip’ (K) in the first two phrases.

If you can see how these melodies go down by the same amount as they go up, step and skip, you will have learnt a lot about melody in general, and the pentatonic scale in particular.

The next melody is the first to start by going down instead of up.

The mark-up for the first two phrases here would be:

The last two phrases are all steps (S)

The next example has the same step/skip profile as Example X (first two phrases) but going up first and with a  shared tonic.

Examples not starting on the tonic

The next examples shows some phrases which start on a note other than the tonic.

The last phrase jumps from side to side before settling to the tonic.

Here’s another example of the same kind.

This is a very creative way of thinking about melody. All these tunes were written to this formula: only pentatonic scale tones, and symmetrical up and down and step, skip about the tonic. Try creating your own melodies as soon as you see what’s going on.

Here’s an example which plays the same pattern in two places.

Your next task is to transpose the tunes, using the up-down, step-skip analysis to help you. This will greatly increase your ability to play by ear.

Here’s the diagram showing the pentatonic scales grouped by number of black keys (difficulty) to structure your study.

Play the MIDI files in the download on MidiPiano using the ‘Key’ function to transpose them into other keys with the plus and minus figures above, and play along.