This page is part of Musicarta's 'Scale City'. If you have not already done so, browse the series home page for orientation, and work methodically for maximum benefit.

You should already have worked through the introductory two-octave scales page. This page applies the practice template to the major scales which use all five black keys - B major, D flat major and G flat major (enharmonic F sharp). 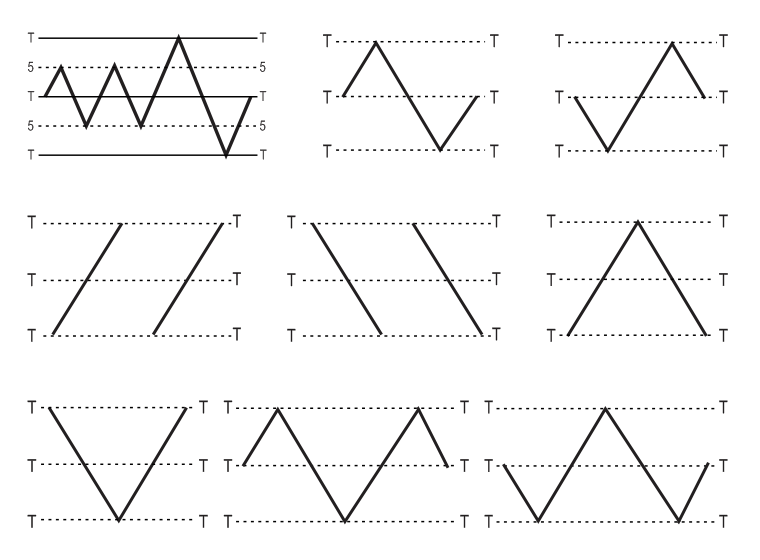 The three all-black-key major scales - B major, D flat major and G flat major (enharmonic F sharp) - all have the same fingers on the black keys.

The thumbs in both hands always play a white key between these groups of black keys - that is, both hands play two white keys in the octave. These are different for the three scales.

B major uses all the black keys - as sharps - plus white keys B and E.

Build up "from the middle thumbs", pausing the video to practice each pattern.


Now try to play some B major scales from just the contour diagrams (above).

D flat major has all five black keys, this time as flats, and uses white keys F and C.

The G flat major scale has six flats in the key signature.

Five of these cue all the black keys, but the sixth flattens the white-key C to the key we usually call 'B'.

If these same keys are written in the enharmonic (= "sounds the same") F sharp major, then the E is sharpened - raised a semitone - and you play the key you would usually call 'F'.

You have now worked through all the major scales over two octaves, and can, in theory, play any two-octave major scale direct from the contour diagrams.

That is, if your first effort doesn't succeed, you should quickly be able to move to a better performance.

If you haven't already tried them, you might like to introduce contrary motion scales into your scale practice options.

Click through to get started, or to use the contrary motion contour diagrams to stimulate your practice.