Rhythmic stress (emphasis) helps you learn your scales by making you want to ‘keep the notes coming’ until you get to a satisfactory ending note.

Stressed scale practice patterns also help you to see and follow patterns – and transpose them.

There are four pages in this mini-series:

Use this mini-series nav to get around the pages.

For example, if you stress every second note, your scales will 'come out' at two octaves. That is, they will finish in a satisfying way after two octaves in length whether straight up or down or up-and-down or down-and-up.

Here's a little 'suite' of the stressed-in-two possibilities, shown as a 'contour' diagram - animated in the video.

Pay attention to how the contour diagram expresses the music. It's 'music without the dots'.

Carry on with the patterns in threes or jump down to the transposing section.

If you stress every third note, your scales will 'come out' at three octaves.

If you accent every fourth note, your scales will naturally end after four octaves (in length).

You could play four octaves straight up or down (not shown), or up and down two octaves, as here.

The video demonstration goes straight into these two four-octave-long patterns stressed in fours.

For scales in sixes, covering a length of six octaves, we can either double any stressed-in-threes pattern, or play scales genuinely stressed in sixes.

Here's an example of how you can make stressed scale practice patterns a useful part of your daily practice routine - in this case, a run-through of C major, and the melodic and harmonic minors.

(Don't worry if you haven't learned the minors yet - it's just an example.)

Stressing scales in threes (or sixes) over a vertical span of only two octaves generates a number of possible 'contour patterns'.

From T-for-tonic - the name-note of the scale - you can see the pattern goes straight up two octaves, down again and up again. That will 'bring it out' - the performance will end in a satisfying way on a stressed note.

The three patterns are for the major scales, then the two minors. If you finish at the top, you start the next scale at the top.

As an alternative, play up an octave then down again, then up two octaves, then down one octave and back up.

That makes a total length of six octaves, but a 'height' of only two octaves.

Check that you see how the diagram correctly represents this.

The diagram shows you playing through the pattern three times, starting from the bottom, the top, and the bottom again.

Note that stressing in threes but going through twice carries you satisfactorily through the six-octave length.

This video shows the patterns above played in C major, C melodic minor and C harmonic minor in sequence.

When playing through the suite of three scales, you start the next scale where you finished (top or bottom).

One novel result is that you start playing the melodic minor from the top - i.e. descending. Expect to find this unusual!

Here's a snap-shot of the MS. For preference, play from an understanding of the pattern, using strong stressed groups of three notes to get you through to the final tonic. 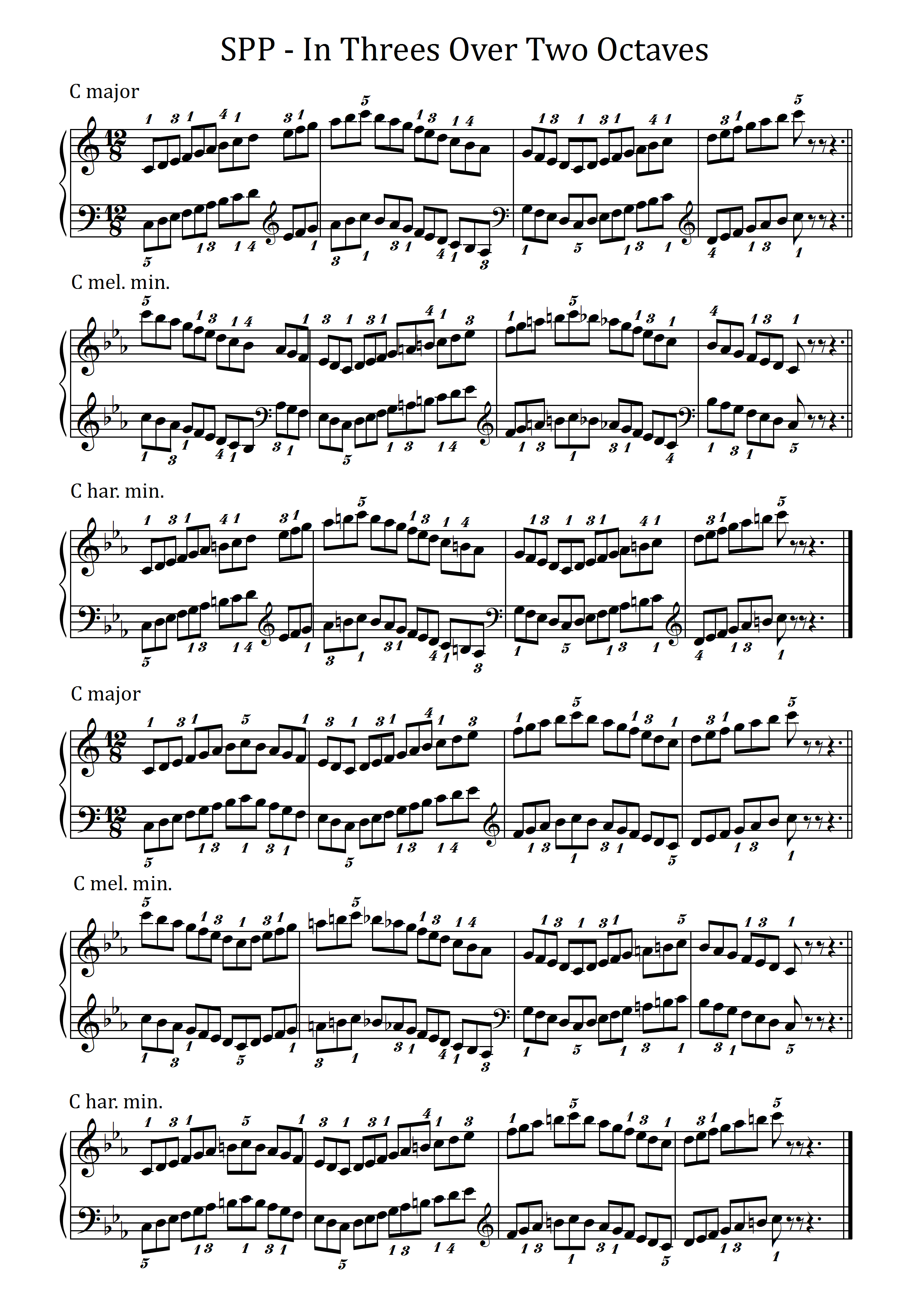 Once you have learned the two-octave scales, you can use these patterns to structure your daily scale practice. Work through the twelve keys methodically!

Once you can play the patterns comfortably in C, you should play them in other keys.

You yourself should transpose the SSPPs into other keys in those groups.

Play the patterns in twos in A and F majors.

Play the patterns in threes in E flat and B majors.

Play the patterns in fours in F and D flat majors.

Here are the contour diagrams for all the patterns in fours

Play the pattern in sixes from the contour diagram in A and F sharp majors.

Now go on to master some stressed scale practice patterns in contrary motion or skip forward and try the SSPPs in thirds, sixths or tenths.