You should already have worked through the previous (one-octave scales) page.

First, build up to two-octave scales one hand at a time.

Now go on to tackle two-octave scales, hands together.

Musicarta tackles the problem head on with a scale practice pattern for Group One scales (C, G, D, A, and E) called ‘From Middle Thumbs’. You learn the two-octave scales from the spot where things usually go wrong – the middle of the two-octave scale where the thumbs play together – so you know the hardest part best of all.


Optionally, work through the steps one at a time.

Put your thumbs on ‘the middle C’s’.

When you play two-octave scales in C and the sharp keys to E, the fingers either side of those middle thumbs are fingers 2 and 4.

Then hands together. Start going down as well as going up. Keep a firm every-four-notes stress going.

Watch your hands carefully to make sure you are actually using fingers 2 and 4 and not some other fingers that feel a little easier.

Next, add the third finger either side of that. The finger threes always play at the same time in these scales.

For hands together, practice one way only first - first, up from 'the middle C's', then down.

Then both above and below. You can set off either way - up or down.

For variety, here's a little 'tune' made of the movements we've rehearsed so far.

Take the opportunity to do some aural work. The 'tune' goes:

*Note that we use 'intervals' - a second, third, fourth or fifth - to describe the vertical distance here. Intervals use 'inclusive' counting - the tonic is 'one', not 'zero', so one note up is a second (counting both notes).

Mathematically, you could write:

You could combine these any number of different ways. For example, what would this combination sound like?

(It's the same number of ups and downs a second and a third, but rearranged.)

Here's the audio of that combination:

Now practice hands together in one direction (up or down) at a time. 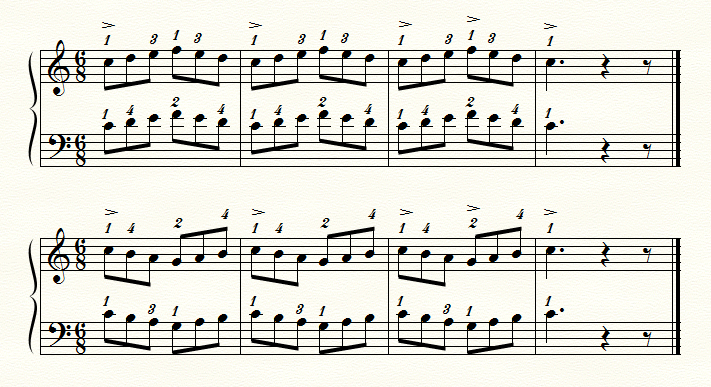 When one hand is playing the ‘thumb under’, the other is using finger two – check visually that this is the case.

Then play the whole drill two-handed.

Add one more note to complete a fifth above and a fifth below.

One more note either side puts the emphasis back in groups of four notes.

Play this segment with two hands.

If you need more preparation, or have got a little rusty, play the one-direction-only-first option a few times. 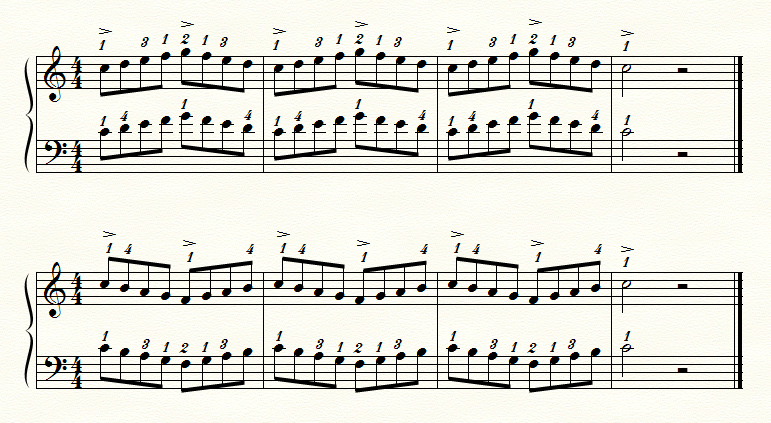 Jump to seven notes either side - to one note before the octave. That's six notes distance, so we're back in six-eight. (Count "One-and-a two-and-a".)

All this repetition is good on its own merits! Expertise at the keyboard is accumulated from hours spent 'just doing it'!

Of course, you have to listen hard too, so your playing improves as regards

And keep that rhythmic pulse going!

You're now primed to play your two-octave scales - but we'll stick to starting from the middle for now.

Here's the video for this section, but you might find it more convenient to play from the segments which follow.


Before the segments, here is the all-in-one scrolling MS video. 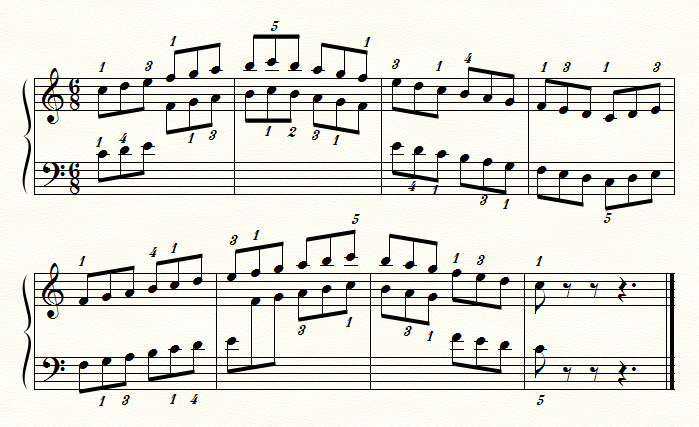 Finally, see if you can keep up with the all-in-one video (repeat).

Go on to the Two-octave Sharp Majors page to see the patterns demonstrated.

Thanks for learning with Musicarta! Come again soon!