Stressed scale practice patterns (SSPPs) helps you learn your scales by making you want to ‘keep the notes coming’ until you get to a satisfactory ending note.

You will need to have worked through the first three pages of this mini-series to tackle the exercises on this page.

Your final challenge is to play contrary motion scales in both symmetrical and asymmetrical patterns, starting from an interval of a third, sixth or tenth - that is, from a different note in each hand.

We'll start with symmetrical patterns stressed in threes and fours over a span (height) of two octaves, starting from a third (LH on the tonic) or sixth (RH on the tonic).

Play the patterns in C, with a strong rhythmic stress, from the starting interval indicated.

Transpose the symmetrical contrary-motion patterns into A and E flat majors.

How is the second of the patterns 'flipped'? Vertically, horizontally, or both?

Transpose the asymmetrical contrary-motion patterns in threes into F and D flat majors. 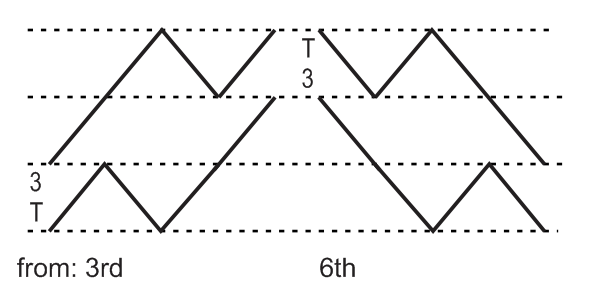 Transpose the asymmetrical contrary-motion patterns in fours into B and E flat majors.

Transpose the asymmetrical contrary-motion patterns in fours into A and F sharp majors.

Playing scales in contrary motion starting from an interval, guided by a 'contour diagram' (and your ear), and transposing the patterns into other keys is high-level musical activity!

Be sure to profit from you ability to do such a thing by moving towards more exclusive (and better paid!) niches in the music business!

Browse the tabs in the Scales series nav (top right) for more ways to enjoy and leverage your scale practice. Or browse the SSPP series again for any transposing tasks you might have skipped, first time round.