This is the Module Two of the Musicarta Canon Project four-part Transposing mini-series.

To get the most out of this Module, you need to have completed Module One, and have worked through the Canon Project series at least as far as Module Seven.

This is the Canon-in-F version we will be developing in this module. The development uses techniques from the main Canon Project series to help you develop your transposing skills. 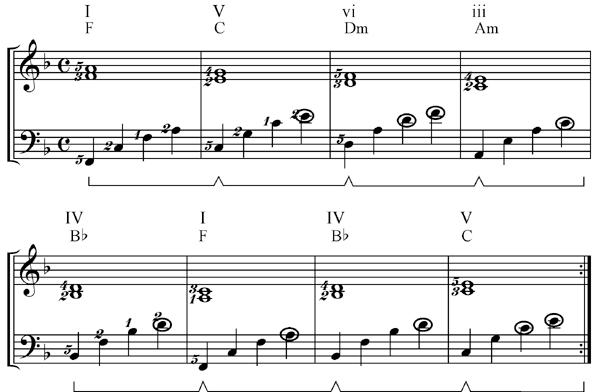 The circled notes are the ‘clashes’ noted at the end of the last module. We are going to use this difficulty to develop the Canon F major version.

Play this version with two hands, fingered as shown. Get the left hand ‘out of the way’ of the right hand as necessary.

If we made both voices (notes) of the thirds move the same as the top note, we would have this:

Now think about putting this string of parallel thirds together with the left hand solo accompaniment in F. Don’t try to play the music just yet.

The clashing notes are circled. The audio performance shows what the written music would sound like with the clashes left in place. 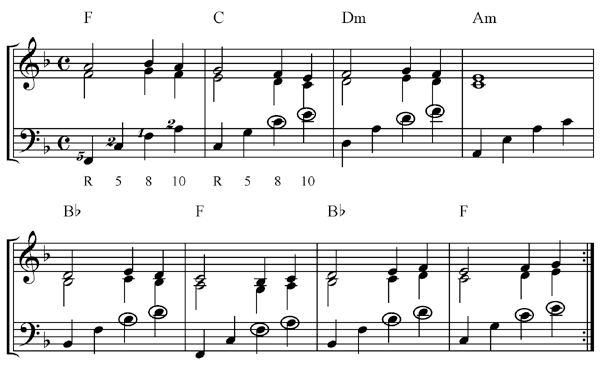 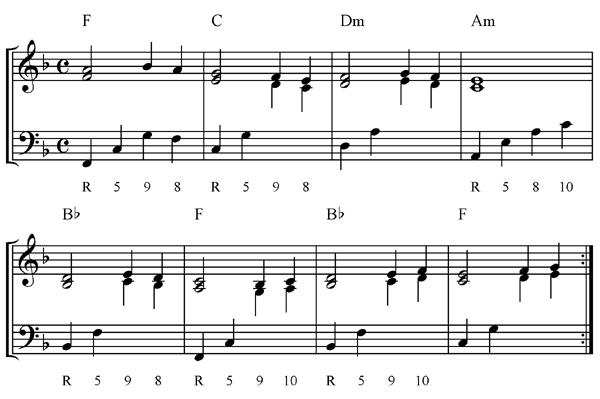 Play the variation using the music and the audio and MIDI performance files.

This Canon module is an exercise in making the most of something – in this case, the clashing of the right hand thirds and the left hand accompaniment. Once you have mastered the principle – playing the lower voice of the thirds with your left hand - you can easily make a variation.

Look at the right hand of the variation you have just learned. The arrows show which way the treble part ‘sets off’ from the right hand thirds at the start of the bar.

Now look at this version.

In almost every case, the treble part sets off in the opposite direction to the first version.

Your task is to adapt the left hand accompaniment pattern to this new right hand part. Listen to the audio performance file and try to play it by providing the lower note of the thirds with the left hand (where the right hand doesn’t play them). Start on the ‘upper F’. Use a C sharp in the D minor bar. Listen carefully to the A minor bar in the audio and MIDI performances, where you will hear a B natural ‘9’ used.

The improviser or composer is always making little decisions like this – whether to ‘go up’ or ‘go down’, and how to ‘keep the pattern going’ at the same time. Mechanically working through the possibilities will give you the technique and confidence to make those decisions yourself, eventually in ‘real time’, and play or compose free arrangements on all sorts of different chord sequences.

This is the end of Module Two of the Musicarta Canon Project four-part 'Transposing' mini-series. Module Three goes on to transpose the Canon chord sequence into G and develop a two-handed accompaniment riff. Click through here to continue studying.