This is Module Three of the Musicarta Canon Project 'Transposing' mini-series. To get the most out of it, you should have worked through the main Canon Project as far as Module Seven and have finished Modules One and Two of the series (nav below).

If you look at the two strings of thirds in our original key D major and the ‘destination key’ F major in the previous section, you can see that the notes have gone up one line or one space to get into the destination key.

The notes have been transposed up a third (counting all the letter-names, D-E-F) – the distance between one line or space on the musical stave and the next line or space up (or down).. If we use the octave-down version of the thirds in F (see example), to transpose the written music from F into G we only have to move the notes from a line into the next space up, or from a space onto the next line up.

We have transposed mechanically, just by shifting the written music up from line to space (or space to line). You can always transpose this way, either on paper or in your head. remember to change the key signature.

Add a roots-only bass line to the new G major music – the original shape. Use the zigzag line diagram to find the notes without reading the music, if you can.

To find the chords in G, use this transposing table:

So in Roman numerals, the Canon chord sequence is:

Reading the G major chord symbols out of the chart:

Here is the music with the chord symbols (ordinary and RNS)

Next, bring to mind what you know about the Canon right hand triads. Here is part of one of the Module Five diagrams:

Re-finger the thirds in G using just 5-3 and 4-2 and try and find the right hand thumb note.

The audio performance has the bottom notes of the right hand triads added. Try to find them before you look at the music which follows.

Here is the music showing the full triads:

We’ll explore the more ‘rock’ potential of the Canon chord sequence in G.

First, we’ll re-write the music as four bars of minims (half notes). (You don’t have to play any faster because of the re-writing.)

Next, tap your foot and ‘anticipate’ the second minim in the bar - drag it forward one quaver slot.

Next, add some bottom/middle/top (BMT) fill-ins:

You might decide it sounds better with the bass down an octave:

There are more BMT fill-ins in this version but only written out in the first bar. Repeat the pattern according to the BMT coding between the staves. Watching the MIDI file performance on MidiPiano will help.

The Transposing mini-series so far

If you have worked through all three Canon transposing modules thoroughly, you can play the six chords of the Canon chord sequence in three keys.

THIS IS A MAJOR ACHIEVEMENT! The ability to transpose is an essential skill for top-drawer working musicians and song-writer/composers, but most teaching systems mystify the process and leave it to much later in the course of study.

In Roman numeral chord symbols, the Canon chord sequence is:

The next table shows the Canon chord sequence in the three keys we have used so far.

Here is the music for a simple three-key run-through: 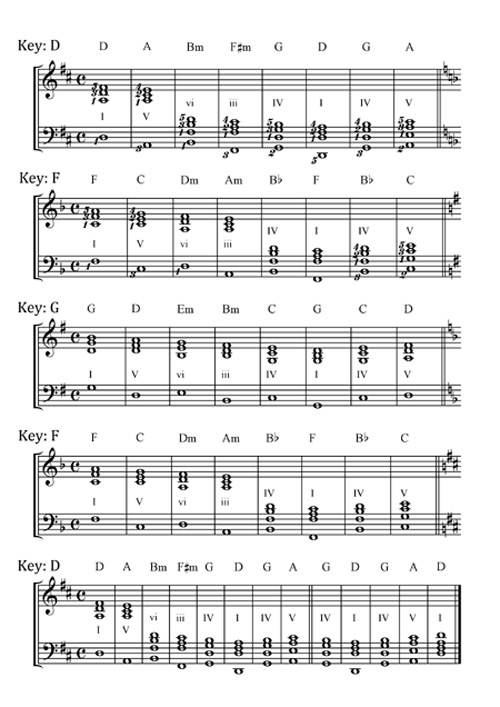 The music is too small to read comfortably, but you shouldn’t need to read it. It only shows the familiar Canon chord sequence – triads in the right hand and a single bass note in the left – played in keys D, F, G, F and D again. The audio and video performance files make this clear.

The only unfamiliar part is the five-bar ending shown at the end of the video. 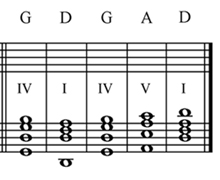 If you practise this three-key run-through repeatedly and regularly, you will learn to transpose. As a spin-off, you will learn and understand other chord sequences a lot more quickly and thoroughly. You will also have a much more secure foundation for improvising on the Canon chord sequence.