You can easily get more out of any chord sequence by pulling some of the chord tones up one scale step temporarily, then letting them fall back. In music theory, this is called ‘suspension and resolution’.

Here is the performance you will learn in this module.

Suspensions in the Canon chord sequence

If you listen carefully to any classical Canon recording, about two thirds of the way through you will hear the music do something like this:

What is happening is that the middle note of each right hand triad is being pulled up a step (the ‘suspension’ – ‘sus’) and then let drop back down to its original position (the ‘resolution’ – ‘res’). 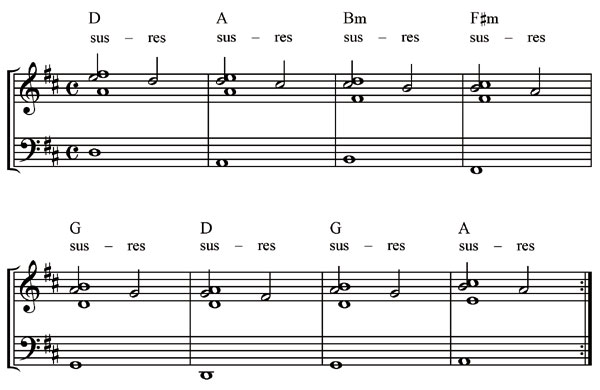 Pachelbel’s Canon goes straight into the ‘suspension’ chord – the second chord in each of the groups above. Technically speaking, this is called an ‘unprepared’ suspension.

You can ‘roll’ the ‘sus – res’ chords using two hands.

Note that the music above is written as simply as possible and the audio and MIDI files play it exactly as written. In practice, you make your fingers ‘sticky’ and hold the notes as long as possible, like this:

The top note of the triad is even held for the whole bar, not played twice. The result is a more lush sound, as the following audio and MIDI files show.

This would sound good as the ‘primo’ (upper) part of a duet performance. What accompaniment pattern would you ask your ‘secondo’ to play?

Learn to play the rolled chords with just the right hand.

The top line of music shows the music written as simply as possible. It would be quite all right for you to play this version.

Then play this right hand over the standard R, 5, 8, 10 left hand accompaniment. 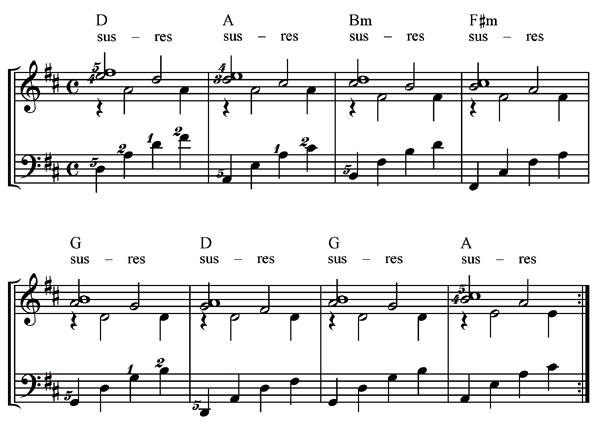 If you listen carefully to the previous audio clip, you can hear a ‘bald spot’ in the odd-numbered bars, where both hands play the fifth and the root at the same time. 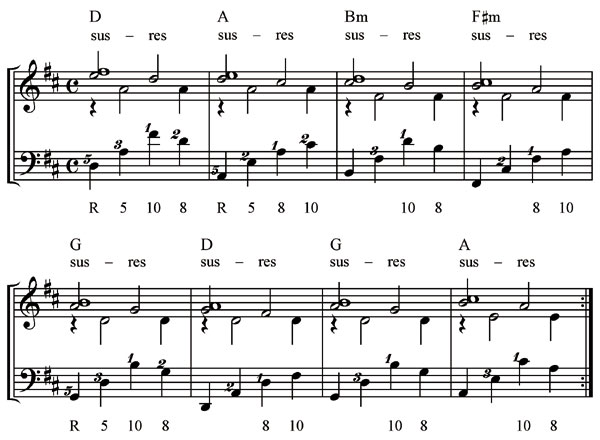 Compare this with the ‘bald spot’ version, listening hard for the improvement. It's your musical judgement and 'ear' which is going to make you a stand-out performer/arranger.

Most of the recorded music you hear will have had many, many of these little improvements incorporated. Start training your ear to hear where an arrangement needs this kind of attention.

You can use the mixed-types two-handed accompaniment as a secondo duet part.

The MIDI file CPM_M11-11 shows both the primo and secondo correctly assigned to left and right hands. It will sound just like the module audio performance.

Most pupils find it more difficult to play the suspensions ‘straight’ (three notes all together) than it is to roll them. See if you can finger the three-note suspension-resolutions as shown here. 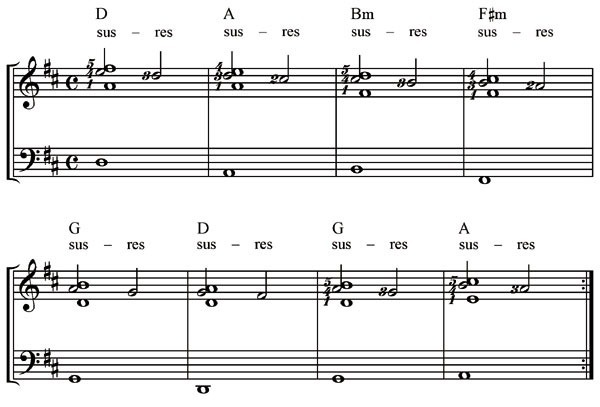 You notice that, when we’re learning something new like this, we simplify things by, for example, playing just a single-note bass line.

When you have made some progress, try the three-note suspension-resolution chords with the mixed-type accompaniment which avoids ‘bald spots’. 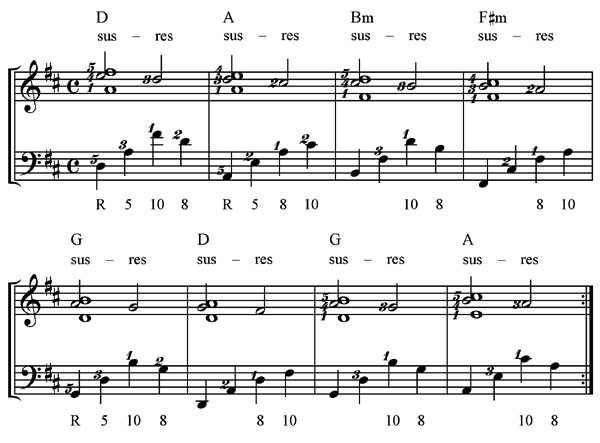 You will get more practice playing the three-note suspension-resolution chords in the module audio and transposing challenges which follow.

Listen to this performance of the Canon chord sequence – with suspensions – in F. Your challenge is to copy it.

Here's the Canon chord sequence in the Roman numeral system.

Use the step-by-step transposing process you used in Module Nine.

Check your performance against the written-out music and the MIDI file in the ‘Answers’ section.

Note how useful it is to know your scales. (This is one big advantage of the classical exam curriculum.)

You can learn scales just to be good at scales, but the real reason for the modern keyboard player to learn scales is to learn the keys. Some arrangements just ‘sound right’ in a certain key, vocalists can often only sing a song in one key and so on, so playing well in different keys is a ‘fact of life’ for pro and semi-pro musicians.

Pop musicians should ideally put themselves on a scales program, so as not to be caught out when the time comes! Visit the Scales tab at musicarta.com for some ideas to liven up your scales practice.

Here's the skeleton music and MidiPiano performance of the Canon version in F. 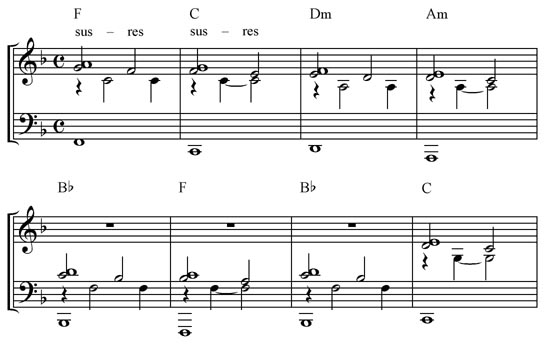 Here is a build-up to a simple but catchy riff using just the D and A major suspension-resolutions in the centre of the keyboard with a simple bass line.

See if you can learn it by ear. The suspension – resolution pairs are just the same as in the first two bars of Canon, but an octave lower.

The left hand uses only notes D and A.

Remember that both Windows Media Player and MidiPiano can be set to repeat (and slow down) the MIDI performance file, giving you lots of time to learn the riff by simply copying.

Here's some 'skeleton' MS as a guide. 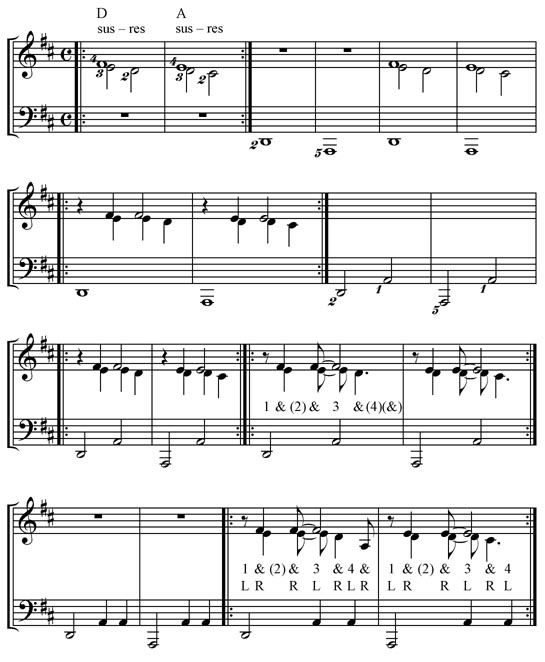 This is a very brief introduction to suspensions. For example, if you look at the Canon suspensions closely, you will see that the chord tone that is being ‘suspended’ is not always the same one. In the D, B minor, G and final A chords, it is the root that is pulled up and then released. This is called a 2 – 1 suspension. In the other bars, it is the third which is suspended. These are 4 – 3 suspensions – the more common type.

In popular sheet music, the resolution is not normally indicated with the ‘res’ provided in this Musicarta module, although sometimes a plain ‘D’ chord symbol (in our example) would show that the suspension had resolved.

Keep working at bringing your theory knowledge to bear! Experiment with suspensions in a general way. Move your chord tones about, one scale-tone either side. Naturally, you need to be staying on the one chord for a few beats for there to be enough time for a suspension/resolution pair. You will find a wealth of new sounds in any chord progression.

Use voice movement diagrams to notate your experiments.

Are you suffering from ‘Canon Project fatigue’? Take heart! By now, you’re not really just learning the Canon any more – you’re actually flexing your very own creative muscles.

It’s easy to flit from one thing to another in the interests of variety, learning this riff and that, but real understanding comes from taking just one thing and knowing it inside out – especially a ‘core’ chord sequence like the Canon.

Because it is so ‘typical’, studying the Canon chord sequence thoroughly is very fruitful. Once you can compose or improvise Canon variations – by finishing versions suggested in this volume, for example, and just generally ‘messing about’ with the Canon chords – the many similar chord sequences that crop up in popular music will be ‘child’s play’ to you.

As you advance from module to module, you will find more and more ‘branching out’ exercises which will prove how valuable your commitment to the Canon Project is. So, stay with the programme – real expertise is being built from your persistence!