In popular music, triads are often broken up and the three notes played one after the other in regular, repeating, ‘broken chord’ patterns. For the keyboard player, broken chord patterns offer a great way of getting more ‘mileage’ out of knowing a chord.

Watch the video or listen to the audio track. You can clearly see the three notes of the triads broken up in a number of interesting ways. If you want, jump right in and see if you can play the treble notes by ear.

Now work through the text and the component videos.

If we call the three notes of a triad bottom (B), middle (M) and top (T), we can use a BMT shorthand to notate broken patterns, getting away from the notes and making the patterns easier to understand and remember.

Here is an example of a broken chord pattern with the BMT ‘coding’ written in.

You don’t play the whole note chords at the start of the bar – they are just there so that:

The BMT coding for this pattern is this.

Practice the pattern until you can play it comfortably. Use the MIDI performance as a visual aid in MidiPiano if necessary.

Here is a ‘BMT shorthand’ sketch which indicates exactly the same performance as above.

Try to play the broken chord pattern, with a bass line, from just the BMT sketch before watching the video again.

Here is another broken chord pattern for you to play by ear.

The rhythm and the chords are just the same, but the order of the right hand broken chord tones is slightly different.

See if you can sketch out the B, M, T pattern from just the audio. Here is your 'usual string of triads'. Pencil in what you think the BMT pattern is.

Ther a video work-out of the 'answer' at the foot of the page.

Now work through the component videos.

Try to play this example by ear.

The BMT coding for the pattern is this

Play the Canon chord sequence right through using the broken chord pattern given, as follows.

The BMT coding for the next pattern is this.

Try to play the whole chorus (8 bars) from just this BMT sketch.

Take time out to enjoy your accomplishment. Rehearse all the patterns, experiment and get comfortable with your broken chords before going on to the next section.

Combine the Module Four thirds with a broken chord texture. Use the last BMT pattern again but play thirds where it says ‘T’ instead of a single top note. Play the pattern over the ‘bouncing’ bass line from Module Four.

Try to work just from the instructions and the audio first. Remember the Module Four advice about ‘build-ups’ – practice over a simple bass line first.

Go to 'Answers' below for more visual learning and the written-out music.

The BMT pattern for your BMT audio challenge (1) is this.

Listen to check your understanding.

Here's a video work-through of the 'answer'. Put the video on repeat and cover the triads shown.

The actual music shows a mixture of chords, notes and pure BMT shorthand. 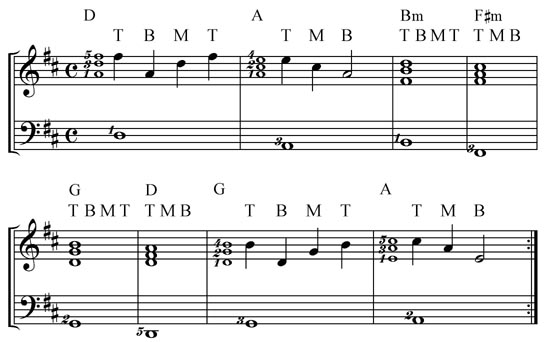 Here's the MidiPiano 'solution' work-out: plain triads over the audio first, then the 'answer' over a bouncing bass line. 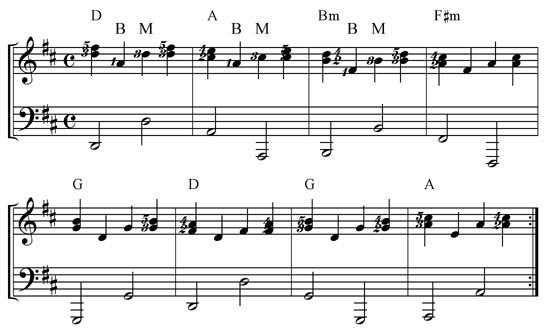 Even as a novice, you can easily make backing tracks from commercial Canon recordings using ‘Audacity’, the free, easy-to-use sound editor. Download and install, then Google “Editing audio in Audacity” and follow the simple instructions from the web page.

If you don’t want to have Audacity running as you play, you can make and save longer backing tracks with a simple copy-and-paste operation, just like in a word processor. If you want to save your tracks as MP3 files, you will need an additional (free) MP3 encoder. You can read it all up on the Audacity site.

Audacity and MidiPiano provide an excellent introduction to digital audio, with all its potential in learning situations. Once you have mastered the essentials, you will easily think of many applications – and classical teachers especially will benefit with their pupils from demonstrating a bit of digital know-how!