This Canon Diary entry is a speedy run-through of the Canon chord sequence and is intended as a quick chord work-out to sharpen up your chord sense. CD 12-05-12 also develops a syncopated bass part with step-by-step video coaching.

Here is the reference video for the syncopated performance demonstrated above. Work through the module before expecting to play this!

Here are the bare chords of the first four-bar/eight-chord strain. (Note the two bass clefs in the written music.)

In performance, the right hand chord tones are broken up with the second chord of each pair anticipated, and the bass following the syncopation.

Your pop-styles music brain should immediately be offering you a BMT (bottom, middle, top) analysis of the right hand pattern:

Here is a MidiPiano performance video of the Canon Diary 12-05-12 entry, with the actual performance on the upper keyboard and the harmony (the chords before breaking up) on the lower keyboard.

Here is the music for the performance (now ships with the Canon Project).

At this speed - you get through the eight Canon chords very quickly - the lack of harmonic development becomes an obvious shortcoming. One of the solutions suggested in the Musicarta Canon Project is adding a contrasting section to create a 32-bar AABA version, as you hear in CD 12-05-12.

Here is the whole chord sequence - just the bare chords. You need to be able to play these chords at this speed before tackling the syncopation. 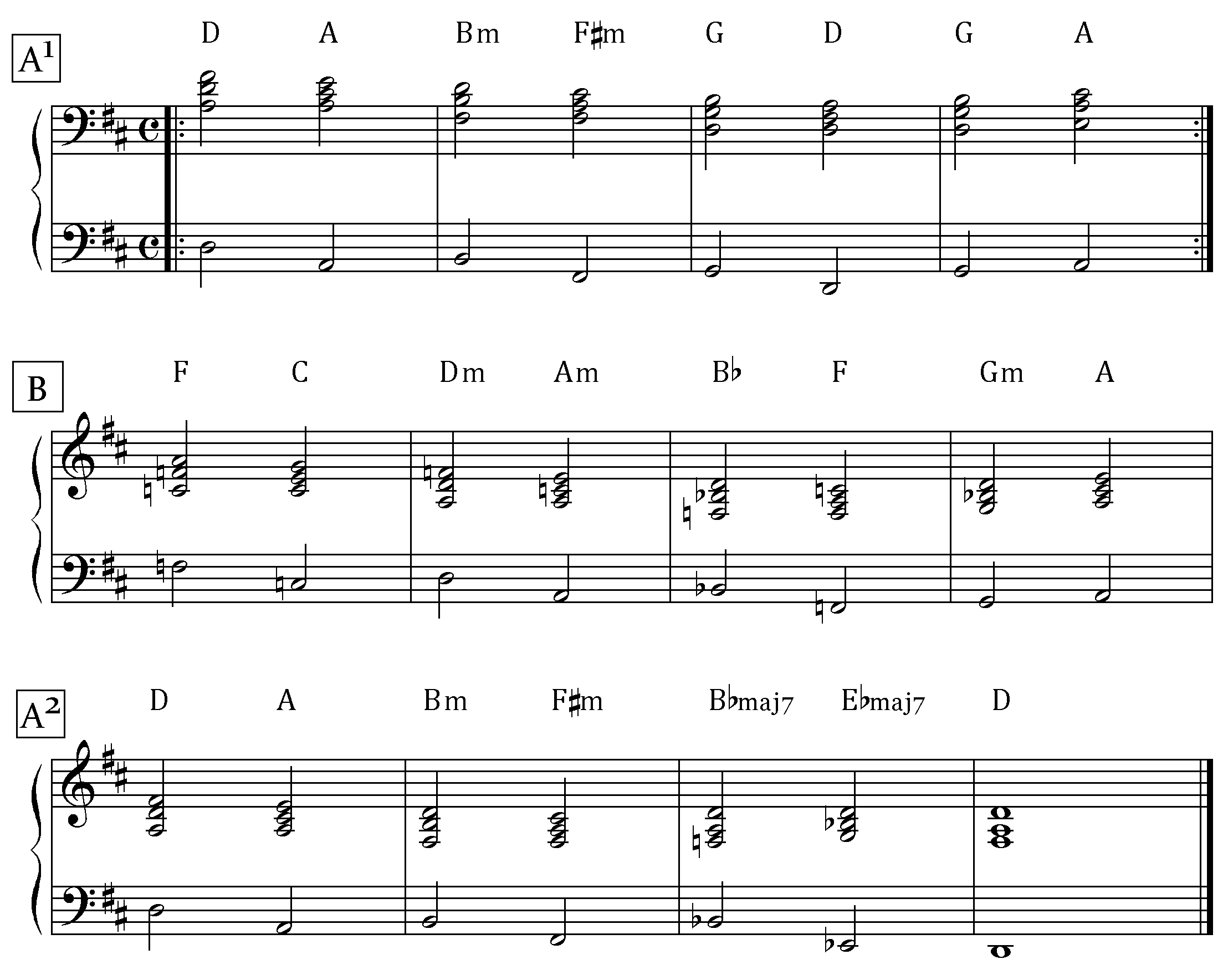 The first strain is repeated, making a four-strain A1,A1,B,A2 form. These are the ‘harmony chords’ shown on the upper keyboard in the second video, above.

Various 'B sections’ have been offered in the Canon Project and Diary entries. As the talk-through in the second part of the first video explains, the B section here simply drops from the A chord at the end of the second strain into the key of F to play chords I-V-vi-III-IV-I of the Canon chord sequence, then modulates back into D via chords Gm and A  - ii and III of F and iv and V of D.

Here is a video to help you practice the B strain chords in F.

You will decide yourself to what extent you want to develop the bass line (left hand).  From the second strain on, it bounces between octaves and gets more caught up in the syncopation.

Written music of the actual notes is probably not helpful. In the long run, you will probably gain more by looking-and-listening to the MidiPiano Piano Roll view of the second CD 12-05-12 eight-chord strain than from any ‘actual performance’ music.

Here is a screen shot of the second strain, with the repeated audio right below. Listen until you see how the green lines in the screen shot represent the bass line.

Don’t be dragged into actually reading the leger lines! The bass notes are all roots (the notes named in the chord symbols) – the chord symbol would tell you (with e.g. a slash chord symbol) if it were any other note.

(Your electronic keyboard might not go down as far as the lowest D. Just repeat the upper D if the octave-lower note isn’t available.)

Here’s a syncopated bass line, on the beat on count 1 only.

The numbers below the music are the quaver counts the left hand notes come on.

If you combine the two patterns (BTTB + syncopation), you get this.

The bass guitar player in Latin music sometimes anticipates every beat like this. The bass is only on the beat on the first beat of the first bar of the whole phrase.

All of these effects, taken on their own and to extremes, become tiresome. These are exercises to practice so that you can anticipate beats and bounce between octaves (etc.) when you think it will sound good.

The harmonic logic is this. The final ‘change’ (chord change) is chord E flat to D, falling a semitone, which harmony will always do with very little prompting. The chord before that is B flat, which is a fifth above the E flat, making it a perfect cadence (V–I, the most compelling harmonic movement .)

An alternative ending which also manages to play three tonics (note D) is this:

This is the classic ‘circle of fifths’ construction, ii–V–I. The final chord change is V–I, dominant to tonic – the ‘perfect cadence’. The chord before that is ii7, which is the dominant of V – the ‘secondary dominant’.

Transposing the Canon (and modulating)

(Note that there is an additional 'free-standing' Canon Transposing mini-series which you can access via the right-hand column series navigation. It covers the same material as here in more depth. This material has been left in place in case you want to 'dive right in' while the F key material is fresh in your mind.)

Transposing is, in a sense, THE musical skill. Being able to play a song or piece or chord sequence in another key 'just like that' testifies to real understanding of harmony, which in turn becomes a major creative asset.

Plain repetition is a perfectly respectable way to acquire this skill, and the B strain of the 12-05-12 Canon Diary offers a good working vehicle for practicing it.

...where the final III chord becomes the V (dominant) chord of the next key.

There are four minor thirds intervals inan octave, so if we play this modulating sequence in D, we will drop successive minor thirds through B, A flat and F majors before returning to D.

Here are the chords for this exercise.

The first chord in each line of music is the tonic – you are playing in the key of that chord; that is the key signature you see.

Here is a MidiPiano performance video of the exercise.

The last phrase (back in D) is the regular Canon chord sequence with the flat VI maj7–flat II maj7–I ending just added on.

You could instead play the A2 (final) strain of the original version to finish, or the alternative Em7–A7,11 ending. Try both, for comparison.

Modulation is traditionally notated using the Roman numeral system, like this (the first modulation in this series, D to B):

The overlap shows the modulating chords (E minor and F sharp) written in both keys – ii and III in D, and iv and V in new key B major. The overlapping chords are also called ‘common chords’ or ‘pivot chords’.