As with suspensions, you can get more out of any chord sequence by using a note other than the root in the bass line. This note will usually be the third or the fifth of the chord. This results in a chord known as a ‘slash chord’, written, for example, A/C sharp (say “A over C sharp” or “A with C sharp in the bass”) which indicates that the bass (left hand) note is a C sharp, while the whole chord (both hands together) is an A major chord.

Here is a sample of textures based on the material you will learn in this module. Listen particularly to the bass line.

Play the string of thirds from Module One of the Canon Project. Use two hands. (The audio file below covers the whole three-step process.)

Take the left hand down an octave.

You are now playing ‘tenths’ – a third plus an octave. Take the left hand down another octave.

You have your new bass line, and the chord symbols reflect this – “A over C sharp”, “F sharp minor over A”, “D over F sharp”. The new bass line moves in scale steps; it is smoothed out, which is usually considered a ‘good thing’ in music.

Playing the triads with the new bass line

Find the usual right hand triads in the centre of the keyboard and put them over the new bass line.

Play the right hand chords according to this BMT ‘recipe’ (it’s from Module Ten).

… over the new bass line.

Here is a ‘sketch’ of the music, but first, try to play without it. The first two chords are shown ‘prepared’ (as whole notes) and broken up; after that, you see just the chord and the broken chord BMT coding. 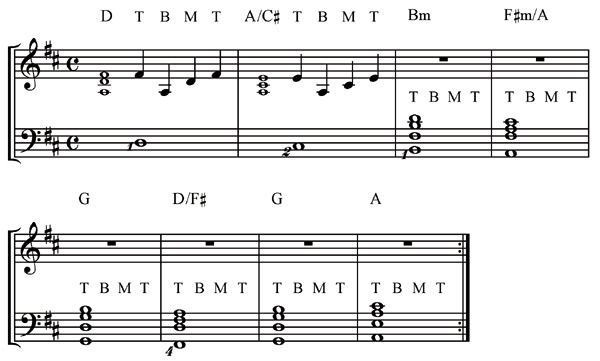 This version makes up the second chorus (8 bars) of the module audio performance.

See if you can play this broken-chord variation of the RH chords over the new step-wise bass line:

The right hand BMT pattern is this.

The last two chords (G and A) are ‘tweaked’ quite a bit. The right hand G chord is a root position chord (root, third, fifth) and the hands in the last bar (A chord) walk in parallel back to the starting position.

You can find the written-out music and the MidiPiano performance in the ‘Answers' section.

In previous modules we changed the accompaniment to fit better with the right hand music. Now that we are featuring the bass line, we are going to adapt the right hand pattern to avoid over-balancing the music with ‘doubling’ (playing too many of the same note together at one time).

Listen to this portion of the module performance and study the illustrations which follow. 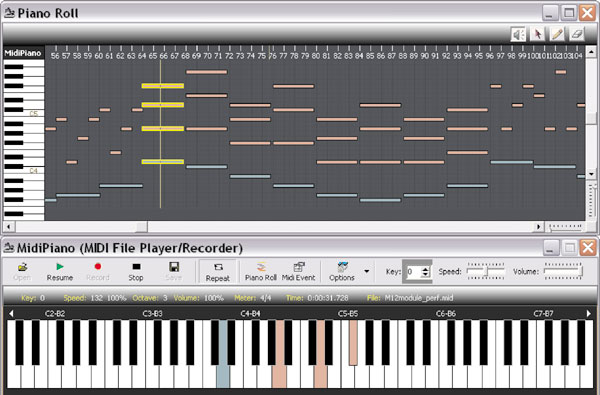 The illustration shows the relevant portion of the module MIDI performance file played on MidiPiano. The performance is paused on the first D chord, which you can see in piano roll pane and lit up on the keyboard.

Here is a snapshot of all eight chords in the re-voiced chord sequence. 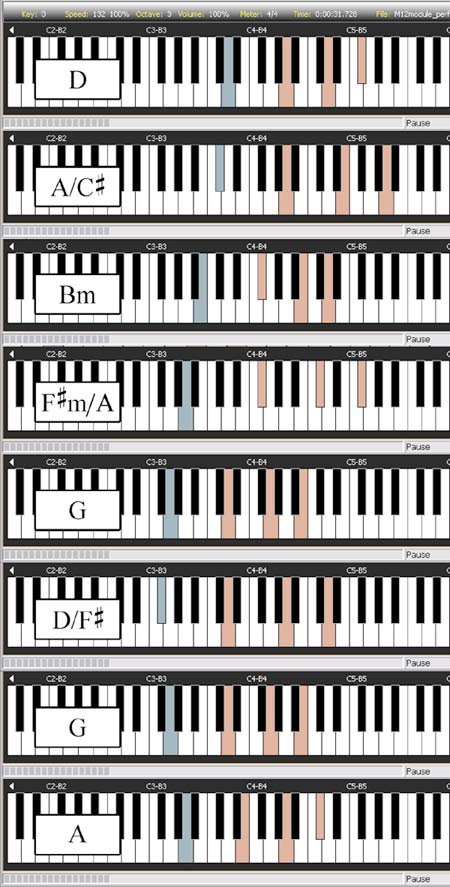 You can see from this illustration how MidiPiano can help you learn to see chords in the keyboard, without having to go through written music.

Here is the music for the new chord voicings, used in the third chorus of the module performance.

In the re-voiced chords (bars 2, 4 and 6), the third appears only in the bass – the ‘doubled third’ in the right hand has been ‘cured’. (Too many thirds in a chord are considered a ‘bad thing’ – they tend to over-balance the chord.) All chords now have two roots, one fifth and one third (tenth), which is considered the best selection for a four-note chord.

Next, break up the new right hand chords according to this pattern.

Note that the last two chords/bars (G and A) are still in the old pattern.

For maximum benefit, go back to the keyboard illustration on the previous page and play the broken-chord pattern arrangement you hear in the audio clip. To help you, the chord tones on the keyboards in the illustration are labelled B, M, T.

Or work from this sketch music. 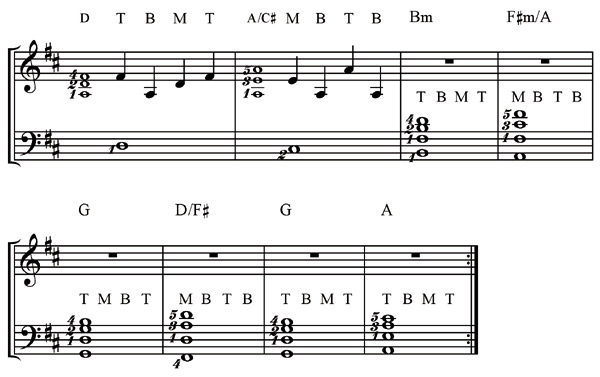 Here is the sketch music.

Don’t let yourself be distracted into puzzling over the bass clef leger lines. ‘Slash bass’ symbols are there to tell you if a note other than the root is in the bass.

Go back and deliberately pay attention to the BMT coding in the example above. Can you hear the chords and break them up in your ‘mind’s ear’? The more often you deliberately ‘go through the motions’ like this, the closer you get to the music just spontaneously happening.

Finally, study how the ‘tune’ in the last two choruses of the module performance springs out of the broken chord pattern in the last musical example. Some notes get ‘promoted’ to melody notes by

This audio clip should make the process clearer.

If you have worked through the Canon Project Transposing mini-series on the home Musicarta site, you should be able to tackle this transposing exercise.

Listen to this audio file.

The audio file is in five sections. See if you can follow this work flow.

Put the hands together, but use only the top and bottom notes of the right hand chords, so you have chords with three notes in total.

Break up the right hand two-note chord according to the pattern you hear in this audio performance.

Performed over the new bass line. 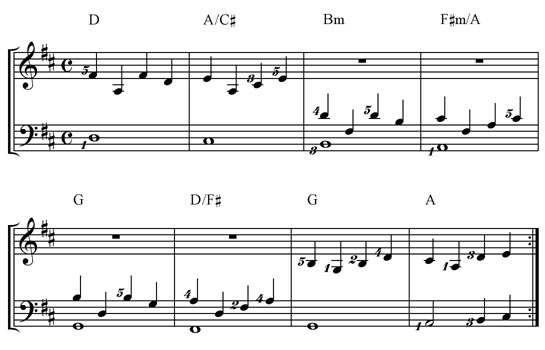