Big Band Swing is an ideal teacher/pupil duet – the treble (primo) part uses only four melodic phrases but achieves a powerful effect with them.

The primo part of the duet uses only four melodic phrases.

Note C is always played with fingers 4 or 2 (in both hands), depending on whether the melodic figure then goes up or goes down. The G chord is always fingered as a root position triad (1-3-5).

You can then potentially decide while playing which pattern to use – improvise, in other words!

In the key of C, The standard twelve-bar I/IV/V, tonic/subdominant/dominant chords are C, F and G. So in essence, the accompaniment pattern is this.

Both hands cover next-door root position triads. (This is the ‘basic music-making position’ explored in Musicarta’s The Pyramid Variations.)

The right hand C chord sounds much better as a first inversion chord. With a bare minimum of ‘tweaking’, you have this attractive little study. 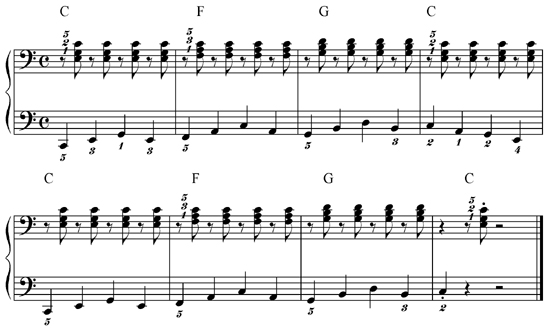 The kick note in the left hand is either the third of the chord or a sixth. Here are both, drilled in all three chords. (See also the one-position drill. below.) 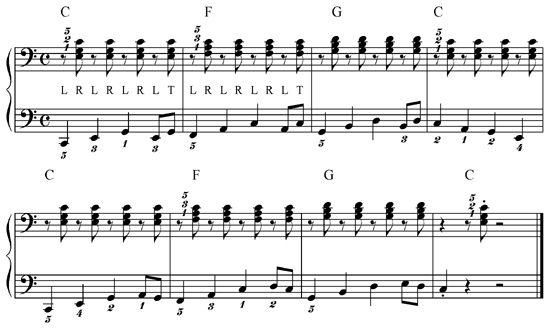 The difficulty with the rhythm which is to be grasped is the one ‘together’ event on the last quaver in the bar. Methodical practice in one position is recommended:

The second time round, the audio plays a variation on the pattern you see here. Can you hear what it is and copy it?

The chords demonstrated above are quite adequate for a performance and might be all that younger secondo players can manage. They do however sound better ‘fattened up’. This section discusses the added tones used.

Some learners feel uncomfortable touching the black keys with the sides of their fingers, but it is essential for playing these chords to have the fingers well up the keys.

The numbers in the chord symbols indicate the notes other than the root, third and fifth chord tones that are played. You count up scale tones from the root of the chord to identify the note to be added. The chief feature of this system to be noted is that ‘7’ in a chord symbol always denotes the flattened seventh – a note a whole tone below the root (the E flat in F7/9 and the F natural in the G7 chord.)

Notice that the F7/9 chord uses the same notes as the tonic C6 chord, apart from the E flat. The hand keeps the same shape and just slides up the keys with the thumb climbing onto the E flat. All three chords are very much ‘right there under the fingers’ and will quickly feel natural with a little practice.

There are two spin-offs from this module – the solo version of the Big Band Swing riff and Twelve-bar Diaries 11-12-14, which developed spontaneously out of the right hand drill BBS_03 in this module. Be sure to check them out!

* Regrettably, it is not possible to reliably assign the four 'hands' tracks in the download MIDI file BBS_01 to the their proper colours. You can do this yourself by opening the MidiPiano ‘Options’ dialogue and dragging all the ‘RH’ files into the Right (hand) box. They will then display correctly for demonstration purposes.