This module explores further the potential of the sixths you learned for Cascading Sixths. These riffs are called ‘diatonic sixths’ riffs because they use only the notes of a scale without any semitone adjustment

(This is the definition of ‘diatonic’. Using the in-between semitones makes music ‘chromatic’, like the chromatic thirds you’ve already learned. ‘Chromatic’ is a Greek root word for ‘colourful’.).

Because we are working in the twelve-bar genre, the scale in question is the dominant/flattened seventh scale, and there will always be at three scale, built on roots I, IV and V of the home key.

Revise the three scales in C (C7, F7 and G7). Notice the span of these revision patterns – music is rarely so tidy as to range only from root to root, after all.

The sixths used in the first module riff are these.

Make sure you understand the scale-tone mark-up above and below the stave. If you learn to think like this, music will quite simply leap out of the keyboard at you!

But in addition the right hand plays the third of the chord as well.

Here is the first MDS module riff. Study it closely. There is an audio-only option below, along with the MIDI reference.

The chord sequence for the riff is shown here.

Read through the chord sequence as you listen to the riff. The boogie finishes on a C7 chord, of course.

All that’s been added to the sixths in the previous section is some right hand syncopation and a simple triad bass pattern.

It’s often the case with two-handed syncopation that you need to sit down and just work out ‘what comes with what’. At Musicarta, we call this “Together, left, right (TLR) analysis.”

Here’s a repeating audio/MIDI C pattern for you to play along with.

The audio has the count recorded in. Tapping just the ‘together, right, left’ pattern on your desktop is another useful practice technique. Make sure you can play the basic pattern in all three places before you start on mastering the jumps between positions and playing the whole 12-bar sequence.

To complete your boogie, all you need now is the ‘turn’ (bar 12 of the first chorus – where you turn round and start again) and the ending.

Here they are, written out in full.

The material in these end-of-halves bars is explained in the  ‘Adjacent Diminished Sevenths’ module further on in the workbook.

The same sixths material can have a different feel with a more driving boogie bass. Listen to this second module riff and see if you can work out in your head what’s been done with the basic material to make the new riff.

Here are the three positions written out. You will want to get each one secure before practicing the jumps. Play the MIDI clips on MidiPiano with Repeat on, adjust the speed as necessary and practise until you can keep up. 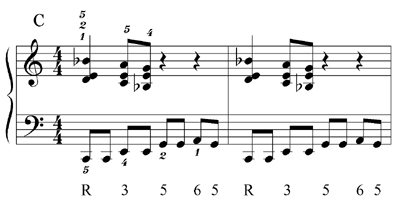 Here is the riff chord sequence.

You see that the jumps between chords you have to accomplish are these.

Note: This fast-track practice sequence works for all twelve-bar music and focuses exactly on where most learners’ twelve-bar performances go wrong – at the changes. Feel free to apply it across the board!

The right hand in this classic boogie sixths riff traditionally has a number of different ‘run-ups’ before the on--the-beat sixths. The run-ups generally consist of either four or five notes.

Here’s the Type One run-up in C.

(This is the run-up played throughout the second chorus of the performance audio.)

Absorb the right hand scale-degree information! The notes used in the run-up are:

You might need to study the TLR (‘together, left, right) analysis shown in the MS in details in order to achieve a performance. Because the riff is ‘triplet feel’, the left-hand pairs of quavers are already long-short, long-short. The middle bar shows the triplet (US, tuplet) brackets, dividing the crotchet (whole note) beat into three quavers (not considered obligatory once the ‘triplet feel’ has been indicated). The result is the TLR situation shown in detail in the first bar.

This MidiPiano screen-shot shows the TLR a lot more clearly than the written-out music.

Here is the Type One run-up in F and G.

Run-ups and the changes

Practise this over alternating C and F basses.

Then use the fast-track practice sequence to practice all jumps with the anticipated run-ups.

You see the run-ups belonging to the next chord are displayed graphically.

The second run-up type adds one note before the Type One run-up notes.

Then use the fast-track practice sequence to practice all jumps with the new run-up.

The third chorus in the module riff performance alternates Type One and Type Two run-ups. Listen closely to identify the pattern.

The third run-up doesn’t add any more notes but is a challenge, even for good keyboard players, because of the jump up to the root.

The fourth chorus of the riff audio performance alternates Type One and Type Three run-ups. Notice how this mixing types stops the riff from sounding purely mechanical.

The boogie plays out with Type One run-ups on this eight-bar sequence.

You don’t even need all three sixths to make a riff. Here’s a riff with just the two lower sixths (in each chord).

As with the second module riff, see if you can work out how to play the riff from just the audio on its own first.

Here is the teaching video. See how much you can 'pick up' from just the audio and video.

Next, alternate the pattern in F and C.

Because the right hand pattern covers two bars, when you play bars 9 and 10 of your sequence, you find the first half of the pattern is in G and the second half is in F. You then go straight into the ‘turn’ bar (bar 12).

The F/bar10 bar often has a ‘tweak’. Here are two of them, written out.

Because the right hand accompaniment pattern doesn’t play at the start of the odd-numbered bars, the keyboard player has space to squeeze in a little ‘lead’ line (melody). They’re short figures and shouldn’t be hard to pick up from the video or MidiPiano MIDI performance, if you want to work up a solo like this yourself.