It’s very easy to get stuck with just one version of a particular ‘trick’ and miss out on all the other variations you have practically already learnt.

This Moving Pair module adds another root note above the moving pair and divides the notes two to each hand – giving you a new slant on ‘seeing the music in the keyboard’.

As you can hear, it sounds ‘fatter’ and has more impact. More importantly, it splits the notes between the hands differently, opening the way to yet more combinations.

Find the following four-note chords. (These are the starting positions only – this is not the riff, yet.)

Use any fingers for now. 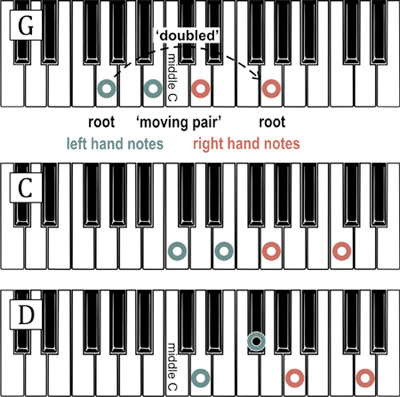 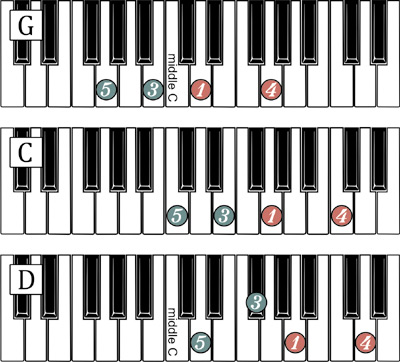 The next task is to move the ‘moving pair’ up and down as before – but now the moving pair is one left hand and one right hand note, inside the two stay-the-same top and bottom notes: 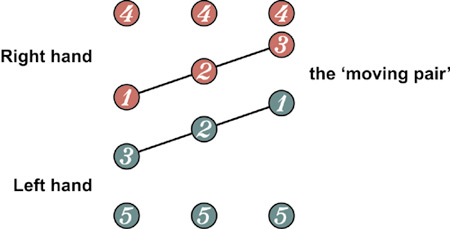 Making your own practice drills

Whenever you get a new thing like this to learn, break it down and practice it methodically. This will speed your progress and save frustration.

Here’s a model practice drill. The player is ‘looking at the material from all angles’ and working every aspect of it thoroughly. (You can almost hear possible new riffs emerging from just the practicing!)

Watching the drill on MidiPiano is particularly helpful here.

Now, without the kick note, apply the rhythm and movement of the original Moving Pair riff to this new four-note arrangement. Do this in the G, C and D positions.

The version on the right is slightly easier – you miss out the second right hand finger four of the ‘kick’.

Next, try some left hand little finger (LH5) anticipation. As before, you can drop the right hand kick note until you’ve had a bit of practice.

Your version doesn’t have to be exactly the same as the audio clip - you could have more, or less, syncopation. The best way forward is just to copy, see what you can keep playing, and build on that.

That goes generally, too. Don’t wait for perfection before going on to the next thing. Get a decent “for now” version going, and bookmark for further practice. It’s more important at this point that you get an idea of the many different ways the ‘moving pair’ can be made into good keyboard grooves.

You should have a book of finger exercises, like the Preparatory Exercises by Aloys Schmitt or The Virtuoso Pianist by Charles-Louis Hanon – and a regular practice schedule for getting through them. Quite simply, finger exercises improve your ability to play the music you want.

Both sets of exercises are out of copyright. You can download them using these Hanon and Schmitt links. (Links open a browser window - download from there.) Once you understand the Hanon patterns, you can use this shorthand version.

Try adding the right hand kick back in. The kick note will come with the before-the-beat left hand little finger. The MidiPiano “Piano Roll” view shows this clearly.

The Performance Troubleshooting module suggested you ask the question:

MidiPiano is perfect for dispelling confusion over things like this – and generally tightening up ‘what comes with what’. In addition, this kind of ‘aerial view’ puts you much more in charge of the music-making than only seeing as far as the next note!

The whole riff in two-plus-two format

It’s more efficient to practice sections before putting it all together, but once you have some proficiency, go on to fill up the chord sequence with your performance of the two-plus-two Moving Pair riff.

Take that ‘at practice speed’ seriously! It’s much better to practice slowly but in time than to practice up to speed and have delays in the music. It’s difficult to break the habit of giving yourself that extra bit of time to get there, especially if you play alone a lot.

You will probably need to work on the jumps between positions.

This mini chord sequence from Module Three is an efficient way of practising just the jumps.

Play that same practice sequence in the two-plus-two format.

This module has presented a lot of difficult keyboard styling which could well beyond your abilities, initially. The good news is that practice works, and, like the tortoise in the fable, the mental stamina to keep coming back to it always wins the day.

Also, you might never need a stage-perfect, hard-driving keyboard riff like this – the riffs you end up using might well be slower. But you still need to be accurate, especially for recording, so listen carefully to your playing and ‘clean up’ relentlessly.

Lastly, dissecting and recombining the elements of this riff isn’t just an exercise for the sake of it. It’s your key to keyboard creativity, as you’ll see from the bluesy Moving Pair version in the next module.