This module is in two parts.

The photos show the lowest, and first,  pair for each chord – the notes you jump to when you change chords.

Notice that the right hand  thumb has to play two notes in each position.

Keyboard learners often think it’s wrong to play white keys up between the black keys like this, but as you can see from the photos, you absolutely have to. It might feel a little awkward at first, but you’ll get used to it. And please note that it’s very, very rare for a person’s fingers to truly be too big to play the keys this way – it just feels like that at first!

The music examples you’ve seen so far – like the one below – are all four bars’ worth of music. Here is the written-out music for the first G position part of the twelve-bar chorus.

That is four bars of music. One bar of music is this: 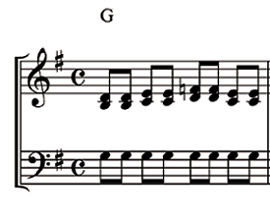 ‘One bar’ is eight chords, counted “One and two and three and four and”

You need to know this because you are going to read the following chord sequence, where each chord symbol indicates one bar of the pattern – and which chord it is.

The twelve-bar as three sets of four bars

It’s easiest to read the chord sequence as three lines of four bars each.

You’ve played the one-bar pattern 12 times, built on the note named in the chord symbol.

Here are the chords laid out in a string:

You should be able to point out which bar in the chord sequence you’re listening to.

Here are the twelve bars in a line, also colour-coded.

This is the basic twelve-bar chord sequence.

There are many variations on this basic twelve-bar sequence, but you need to know this basic chord order by heart.

Module Two is asking that you do these two things at once:

Obviously, accomplishing this is a medium- to long-term aim! There is a Troubleshooting module up next to help you tackle the difficulties efficiently.

Here's the module tutorial/'walk-through'. Be sure to study the notes as well, though!