If you have worked through the Moving Pair series as far as this, you know the basics of most twelve-bar music. By recombining these elements, perhaps in a different rhythm or on a slightly different chord sequence, you can create hundreds of new riffs.

You will also find that you can ‘hear what’s going on’ in twelve-bar and other blues-based music – and thus begin to play by ear with more confidence.

The following three modules give you the chance to explore both these opportunities.

This variation splits the four notes of the Module Five Moving Pair riff three right and one left. The root at the top in the right hand keeps the riff sounding powerful, while the left hand drops an octave and ‘anticipates’ in places, with its own ‘kick’ too, as you will hear. The result is more of a solo-style riff.

Here’s the chord sequence - read it as you listen to the riff audio (below).

Here is the ‘Two-plus-two’ (Module Five) starting position for the G chord with the ‘Three right, bass left’ position lined up beneath it. 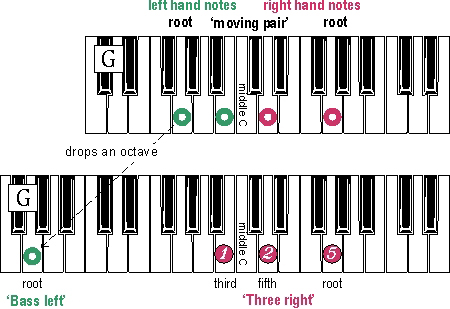 Use the fingers shown. Pay attention to the new chord tone names – root (the name-note of the chord), third and fifth. They are going to become more and more important as you learn to play 12-bar riffs in different keys.

Find the starting position notes in chords C and D as well.

Here's a video of some finger exercises for this kind of work.

You can download the MIDI files of these two sets of exercises using this link. Load them up in MidiPiano and zoom in on one section at a time. Little and often does the trick - build up stamina slowly and don't exhaust your hand/wrist.

Playing fiddly little things like this well takes a lot of practice!

Classical piano students do lots of finger exercises to make their fingers strong and obedient, but often never get to play the (popular) music they would like to.

As a Musicarta learner. you get to play the music you want from the start, but that doesn't mean you don't need to practice. You do! You can download a set of Hanon finger exercises here (or the abbreviated version) for regular practice.

The bass line has acquired some decoration. Try copying this audio/MIDI build up.

Here’s the bass line, written out, to show you what the decoration notes are. 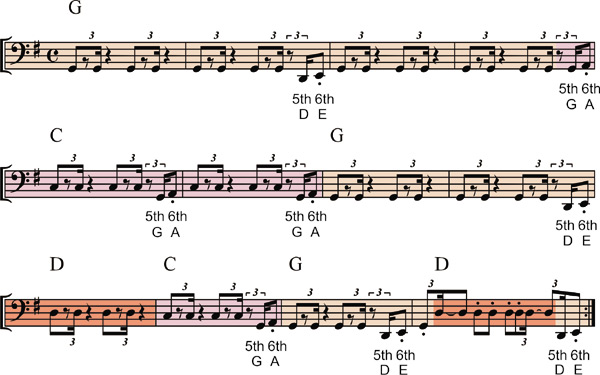 As you can see, the decoration notes are always the fifth and sixth of some chord – the colour coding tells you which. It’s a classic bass line decoration which you no doubt recognise. All unmarked notes are roots.

In key G (chords G, C and D), you can safely name the fifth and sixth by counting round the musical alphabet. Note that you start counting at ‘1’, not zero.

(As an additional ‘tweak’, note that the fifth and sixth might belong either to the current chord or the next chord coming. Look at the colour coding in the written-out music and be clear in your mind which one it is.)

Simplify the right hand as much as you want while you work the bass line decoration into your performance. You could even cut the right hand back to just two notes (the moving pair notes).

Here's the module riff audio again, to guide your practising and performance.

Remember, you can easily slow down playback in MidiPiano (and probably in your media player as well) to give yourself a practice-speed benchmark to aim for.