Musicarta’s Moving Pair series isn’t about reproducing historic performances or copying licks. Rather, the aim is to teach the basics of twelve-bar riffs and combine them at the keyboard in a satisfying and exciting way. The more times you combine and recombine the elements like this, the easier it becomes to create another riff or work out how a recorded example is put together.

Note: Both the riffs in this module are played ‘double time’ – there are two bars of music (eight crotchet beats) for each chord symbol in the chord charts. Technically, they are ‘24-bar twelve-bars’. See also the note in Module Nine.

There are two riffs in this module. Here is the first riff we’re building up to.

Play the root(s) and any notes below with the left hand and the moving pair material with the right hand. The MIDI performance file played on MidiPiano clearly shows the hands divided this way.

All the crushed notes are optional! Don’t let not being able to play crushed notes to your complete satisfaction ruin your enjoyment or slow down your progress.

You hear something slightly different in the first module riff. It uses the minor third (B¨ in the G position, E¨ in the C position) at the end of the main G and C patterns. The MidiPiano performance shows you this clearly if you can’t work it out just by ear – zoom in to just one pattern and slow the playback down for a good look-and-listen. 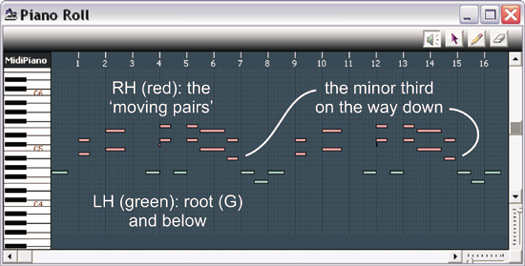 (The riff sounds fine without this extra twist, though, so it doesn’t matter if you leave it out for now.)

The one-bar D and C patterns in the third line of the chord chart (bars 9 and 10) have a different pattern, but it’s still classic moving pair material. You should be able to get it, with the help of the MIDI file performance

(These two bars are also slightly different to each other. Optionally , look-and-listen closely to the audio and MidiPiano performances to work out how.)

Use your media player and MidiPiano (or other sequencer) intelligently to help you get this riff. Zoom in, slow down and be prepared to practice over and over until you get it.

The clever part is putting RH 4 and 1 on the middle pair on the way down, and passing 3 and 2 over them, in turn. It’s a strange feeling that takes some getting used to, but it’s smooth and gets you back down to thumb on G.

Try it, see how it works and why. You could use 4-2 on the E-C pair, but sooner or later, we all have to get to grips and learn some tricks!

The riff should still sound exactly the same played with one hand.

The bass line here is a development of the Module Ten riff bass line. Revise these three groups of three notes.

The new development is a note squeezed in between seventh and the root.

The new note is a major seventh – a semitone below the root. Listen to the full riff again, paying close attention to the bass line.

The three-note run-up has to start in time to arrive at the root (R) on the strong beat at the start of the bar. Listen to this practice drill.

These performance demo files use a slightly different chord sequence:

(Remember, each cell in the chord chart is worth eight counts.)

You could, in theory, play the same run-up to every start-of-the-bar root.

There are actually four different run-ups between the various chords. Here they are, written out with bass guitar TAB. 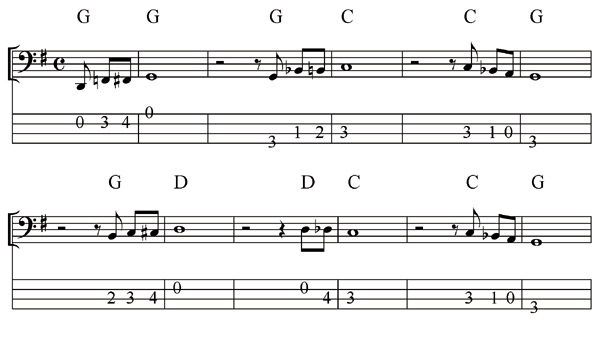 Look (listen) closely to see ‘what comes together’ when both the left hand and the right hand are playing at the same time.

You actually have an F sharp and an F natural playing at the same time. If you’re practising very slowly this will sound ‘wrong’, but at performance speed a bit of dissonance like this adds character.

If you’re having difficulty at any particular spot, pause and zoom in on the MidiPiano MIDI performance for a closer look.

The second riff in this module is very similar to the previous riff, but:

This similar-but-different riff therefore offers an exercise in quickly ‘getting’ a rhythmic variation.

Listen to the riff audio.

The riff uses the same chord sequence as before.

Here’s the riff G position looped and slowed down to practice speed.

Disregard as much of the bass line as you want – you could just play the one long bass note for now.

The riff uses the ‘flapping thumb’ left hand from previous Moving Pair modules (here on its own, without the run-up).

The C and D patterns

You might find this transposing exercise easier than you think!

This is the end of the Musicarta Moving Pair series of twelve-bar piano lessons.

The Moving Pair material is incredibly versatile. Listen to this audio sketch:

It’s all Moving Pair material with the right hand playing various ‘two positions only’ inversions on this chord sequence.

It’s not hard music to play – you will quickly pick up the chords from the MIDI file.  ‘Giving yourself permission’ to have a go is often the main thing stopping keyboard players making riffs like this up.

From here, you will probably want to browse the members-only learning material for the other Musicarta Twelve-bar modules showcased on the Twelve-bar Styles portal page and the Mister Musicarta YouTube Twelve-bar playlist.

You might like to try playing some of the twelve-bar solos you’ll find there by ear, and you are probably capable of playing along with a host of blues, rock’n’roll, and generally any twelve-bar-based pop music. Review the section in Module Eight on how to use MidiPiano to ‘tune in’ to the key of your ‘target music’ so you can start applying your Moving Pair expertise.