You don't have to work methodically through this theory module in order to learn and enjoy playing the many boogie and twelve-bar riffs in the Musicarta Twelve-bar Piano Styles workbook. The music theory relevant to twelve-bar music (and particular pieces) is scattered throughout the study modules and can be successfully picked up along the way, but learners might also find having all the information in one place useful for reference and for consolidating their knowledge.

BUT... many 'unschooled' creative musicians can improvise and compose at the keyboard precisely because they understand, implicitly or explicitly, the music theory which underpins their particular musical genre.

This is because music theory is ‘creative’ to a unique degree. In a musician, knowledge of music harmony actually generates music, or the possibility of music. It also greater enhances the ability to play by ear, since it effectively predicts the chords most likely to be found together and provides the education for the ‘educated guesswork’ the play-by-ear musician seems almost magically to enjoy.

This page is divided into three main sections: (1) The major scale, (2) the Roman numeral system of naming chords and (3) the music theory names of chords.

Most of the music you hear is based on the Western major scale, which can be found on the white piano keys from C to C.

You see that of the seven steps in the major scale, five are whole-tone steps (two white keys with a black key between them) and two are semitones (no black key between). The semitone steps occur between scale tones three and four, and seven and eight (the octave).

The location of these semitone steps is all-important. You will see why if we build chords out of the major scale tones.

(The first three musical examples are rolled into the one audio/MIDI reference file.)

We find that the semitone steps in the scale create three types of triad – major, minor and diminished – which vary according to the number of semitones between the notes.

Note the chord symbol convention. Capital letters on their own – C, F, G – indicate major chords. To indicate a minor chord, you put a lower-case ‘m’ after the chord symbol – Dm, Em, Am – and “D minor”, and so on. The ‘dim’ stands for ‘diminished’.

The chords built on the first, fourth and fifth scale degrees are major chords and concern us most at the moment.

If we use Roman numerals to talk about chords, we can use what we learn in any key, and we will be learning about ‘chords in general’ – harmony – as opposed to just one song or piece.

Here are the Roman numerals from one to ten, with an explanation of how they work.

To describe chords, we only need the first seven Roman numerals, I to VII. We use upper case (capital) Roman numerals for major chords, and the lower case for minor chords.

So we designate our mixture of seven different chords as follows.

Using the Roman numeral system, the major chords built on the first, fourth and fifth scale degrees (which most interest us) are referred to as I, IV and V – “One”, “Four” and “Five”. Here they are, shown in the key of C.

There is another system for talking about ‘chords in any key’. Here are our simple triads with both the RNS and the music theory chord names.

You see that our three principal chords can also be referred to as the tonic (I/One), subdominant (IV/Four) and dominant (V/ Five).

Here are the names from tonic (I) to tonic, in a table. 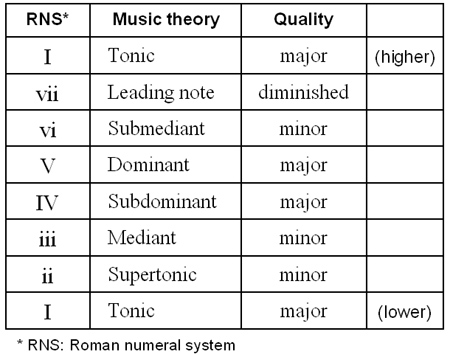 As with the Roman numeral system, you don’t have to learn these names by heart in order to progress. You will get plenty of exposure in the course of learning the riffs.

This re-arranged diagram might also help you remember them more easily. The tonic (home chord) is now in the middle. 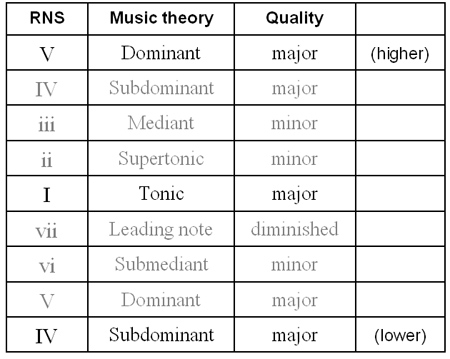 Notice that, counting inclusively from ‘one’ (the tonic):

It’s equally possible that any particular piece will use the closest dominant (V) and subdominant (IV) chords to the tonic – up and down a fourth only (instead of a fifth): 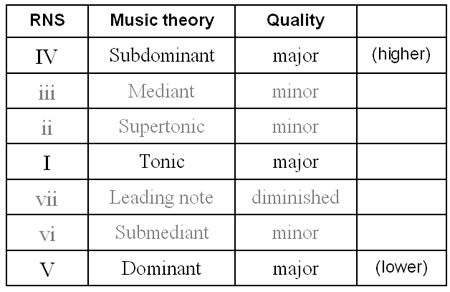 Now the ‘sub’dominant chord you use is above the dominant!

As well as being built almost exclusively on the I, IV and V chords in any particular key, twelve bar music has a further significant feature. These three chords nearly always have an added ‘flattened seventh’.

The three chord tones of the simple triads you have seen so far in this module are the root (name-note), third and fifth (counting scale tones up from the root). Seventh chords add the seventh note up from the root to make as four-note chord – though not all four are necessarily played.

Building seventh chords using only scale tones on the degrees of the scale we get the following.

Although the chords look the same – stacked, next-door line notes or space notes – there are in fact four different types of seventh chord. You can only tell this by counting carefully the semi-tone steps between next-door notes at the keyboard.

If you want to make a detailed study of the seventh chords (because, for instance, you wish to understand jazz), visit the Musicarta Seventh Chords page. At present, we only need to look at the chord built on the fifth degree of the scale – also called the dominant. This ‘dominant seventh chord’ is the chord that gives twelve-bar music its characteristic sound.

The dominant seventh chord in root position is a stack of major, minor, minor thirds (M, m, m) building upwards from the name-note at the bottom. To play twelve-bar music, we need a chord of this type on the three essential twelve-bar chords – I, IV and V.

In key C, these will be C7 (“C seven”), F7 and G7 – the major triads that occur naturally on those scale degrees, with a note a minor third (three semitones) above that.

These four chord tones can appear in dozens of different ‘voicings’ (arrangements). The important thing to notice is that the ‘seventh’ in each case is the note a whole tone (two semitones) below the name note (as demonstrated in the audio/MIDI file).

That concludes this theory overview. The chord structures of blues and twelve-bar music are considered next.