The music for the first chromatic sixths study, Slippery Customers', is in your workbook. Here is the teaching video, with the MidiPiano performance.

The audio-only performance, with the download MIDI file reference, is directly below.

Here are the chromatic thirds you learnt before (in C) and their sixths inversions.

Do a thorough job! Work through the same pattern in F and G as well. Remember, the only whole-tone step is between the root of the chord and the next note up.

Some left hand roots have been put in the audio/MIDI examples. Parallel chromatic intervals like these can make you lose your sense of key centre.

Then rehearse just the sixths. Don’t be drawn into reading every note. The landmark tones (root, third, fifth and flattened seventh) are indicated – work from those.

Keep reminding yourself that all steps are semitones, apart from the root of the chord (C, F or G) to the note above it. 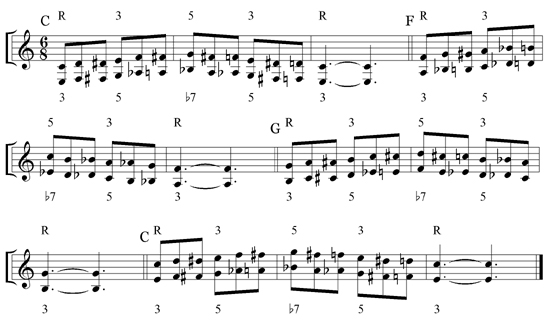 There is one run of sixths in Slippery Customers which is not quite true to pattern.

These are the top notes of the familiar thirds shown in the second half of the line, but harmonised with sixths below – that is, not inversions.

(In performance, the third of the C chord is played with the first of these sixths. It’s an unwritten rule that you must play the third of a chord straight away, or very soon afterwards, for the chord to sound full enough.)

The study splits the sixths up between the two hands. (You did something similar in the Moving Pair series.) Watch the teaching video several times, looking out for the sixths in the MidiPiano performance.

Here is the ‘skeleton music’, showing just the sixths played with the right hand and the roots in the left. The MidiPiano performance will show you the different hands clearly.

Then, split the sixths up between the hands and play the root in the right hand as well.

Then add as much of the syncopation as you can. The music is in your workbook. Notice how, in the last bars, the left hand helps out with some difficult next-door sixths in the right hand.

Other chromatic sixths riffs and licks

Perhaps the most familiar chromatic sixths twelve-bar lick is this favourite intro/outro construction.

Here it is as an introduction:

And as an ‘outro’ (opposite of an intro):

Once your ear is attuned, you will hear chromatic thirds and sixths seemingly everywhere in twelve-bar music. They are a very fruitful resource for ‘just doodling’ twelve-bars at the keyboard bars and will give your playing an authentic and knowledgeable sound.