Now, we must complete the process by learning to build both major and pentatonic minor scales on the same root (home-note) - 'parallel' pairs.

Learning to build both major and minor pentatonic scales on the same root quickly teaches you the all-important distances (intervals) between the scale tones. When you know those, you will be able to use the pentatonic scales a lot more easily in your keyboard improvising.

The following section is from Musciarta's pre-video audio archive. Try it! (Or you can skip down to the pictures section.)

Intervals in the pentatonic scales

Here is a column diagram representing both major and minor pentatonic scales built on the same root. 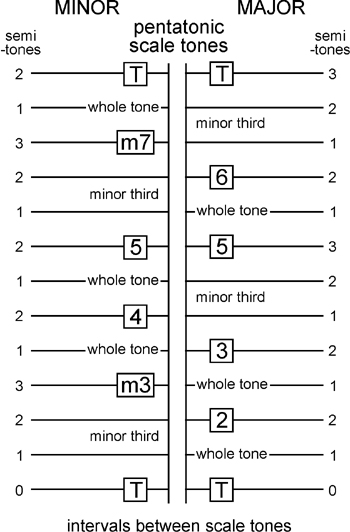 Let’s look at some keyboards with the intervals (distances) counted off in semitones.

There are two things to remember when you count semitones.

Note: The audio files play only the six darker-shaded notes, up and down, twice. Count the semitones off, trying to hear the two different ‘sizes’ of the steps. Sing along, and follow at the keyboard too.

When we move to the 'parallel' (built on the same root) minor pentatonic scale, we find we have two black keys.

Here is another pair of scale. We start a minor scale this time  - all-white-key E minor pentatonic.

The intervals in music manuscript

Now here are the four scales in music manuscript. 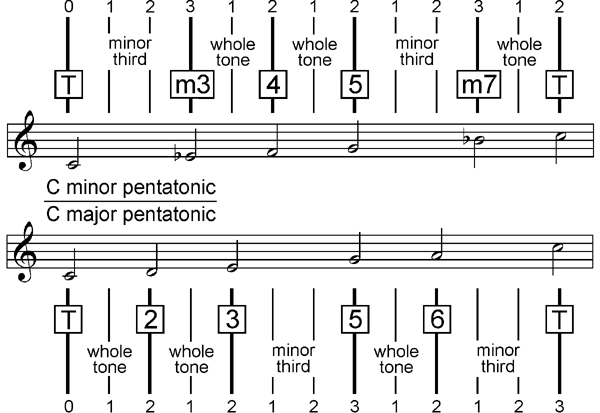 The audio file plays the minor scale up and down, then the major, then it repeats. Use it for ear-training.

Make sure you see how both the counted-off keyboards and the music manuscript ‘tell the same story’. 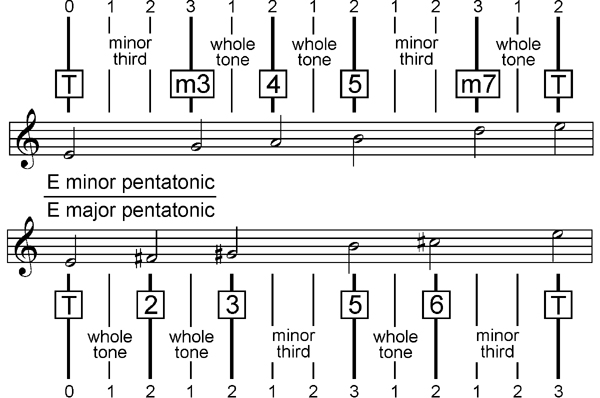 Here are some tasks to check your understanding so far.

And now for the video.

Here's a video which demonstrates how pentatonic major and minor scales are built up from the same root.

The scales are split up into three groups or easy of navigation and to help you structure your practicing.

Keep coming back until you know these scales without having to think about it. (It's not that big a task, really...!)

Your practical knowledge of intervals and 'what the keyboard sounds like' will benefit massively.

About the PDF music files

The scales are written without key signatures, so the sharps and flats in the music indicate which notes use black keys. Also, every black key has a sharp or flat in front of it – you will not normally see accidentals repeated in the same bar like this.

Lastly, don’t get hypnotised by the ‘dots’! A glance at the interval reminders every now and then will help you remember the pentatonic shorthand and how many semitones there are between the scale tones, and remind you that this is a knowledge-building exercise, not a mechanical finger exercise.

Working with the ‘same root’ version of the scales first, play right through the twenty-four scales. Divide the job up into sections to keep your attention fresh. Try to play the scales from your knowledge of the intervals.

If you can read music at sight, pay particular attention to learning the patterns and building the scales accordingly. It’s probably better to be not such a good reader – you will use the semitone counting in the interval reminders (plus, of course, your ear) to help you find the scale tones. This is far more use to you creatively than reading the music.

You should anticipate spending a lot of time on this. Remember that in the end you want to be able:

That’s not a done-it-once-and-move-on task!

Train yourself to sing the pentatonic scales. Sing along with any (or all) of the audio clips in the Musicarta Pentatonic Scales lessons, both with your eyes closed and looking at the many examples of pentatonic shorthand (T, m3 etc.). Your singing doesn’t have to be in tune – it’s not for public consumption. Just the relative size of the gaps has to be clear in your mind.

Test your progress by seeing if you can pick out the major and minor pentatonic scale tones ‘by ear’ with your eyes closed from a random white piano key.